Uber In Canada: Edmonton May Be Template For Legalizing Ride Sharing In Other Cities

EDMONTON — Cab drivers in Edmonton protested for months at city hall, some of them pulling off their shirts, as councillors debated whether to pass a new bylaw legalizing ride-sharing companies such as Uber.

As similar revolts played out across Canada, the Alberta capital sped ahead late last month and became the first jurisdiction to pass regulations for the new industry.

By being first to take the leap, Edmonton is showing other cities that it can be done, Pliniussen says.

He expects most jurisdictions will have regulations in place by the end of the year.

“This is not complicated at all.”

California-based Uber is an app-based business that operates in 40 Canadian communities as well as around the world. It allows people to request rides over their phones and sets them up with drivers who use their personal vehicles. Getting an Uber ride is typically cheaper than taking a taxi.

Cabbies are concerned that Uber drivers have an unfair advantage because they’re not subject to licensing and insurance rules.

Edmonton’s regular taxi drivers argued at testy city council meetings last fall that the service would flood the streets with drivers and make it impossible for them to make a living — taking their shirts right off their backs.

Under the Edmonton bylaw, which takes effect March 1, “private transportation providers” must carry provincially approved insurance, have an annual vehicle inspection and agree to a criminal record check.

They must charge a minimum of $3.25 per ride, but there is no price cap. Only taxis are permitted to pick up street hails or use taxi stands. 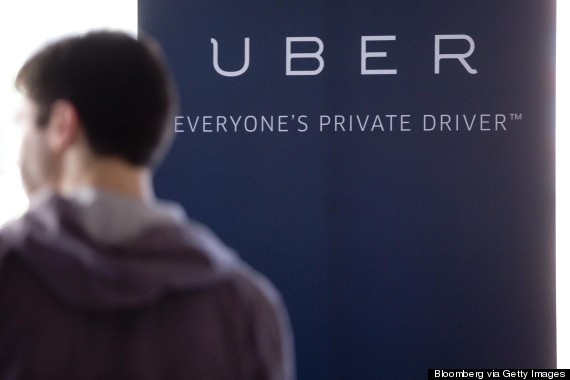 Cabbies are concerned that Uber drivers have an unfair advantage because they’re not subject to licensing and insurance rules. (Getty Images)

Uber Canada said the regulations are workable and applauded Edmonton for modernizing its transportation laws.

The Alberta Taxi Group said it was disappointed by the bylaw and that it still fails to address safety and consumer protection concerns.

Pliniussen says it’s clear that customers like Uber and it’s here to stay, so cities need to get on board. He adds that Canada is behind the United States, where dozens of jurisdictions have passed regulations.

“This is not complicated at all.”

But it is contentious.

Uber stopped operating in Calgary in November after the city won a court injunction against the company. City staff are still working on a bylaw, which is to be presented to council Feb. 22.

In Quebec, the taxi industry is also going to court seeking an injunction against Uber and the province’s transport minister has called for a parliamentary commission to study ride sharing.

City officials in Toronto are also working on a bylaw. A report is expected in April. Mayor John Tory has commended Edmonton and says he hopes his city can accomplish the same thing.

Ontario’s insurance regulator has made the move easier by approving coverage for ride-sharing drivers — the first to do so in Canada. Aviva Canada says it will be working with regulators across the country to make the same insurance available in other provinces. Uber says other insurance companies are also considering coverage.

Mariana Valverde, an expert in municipal law at the University of Toronto, says insurance is a big hurdle in legalizing Uber, although with Edmonton taking the first step with its bylaw, other cities are likely to do the same.

But she fears that Uber, with a monopoly so far on ride sharing in Canada, will drive cabbies out of business. And if taxis disappear, Uber would be free to hike its rates, she suggests.

Valverde recently flagged a cab in Toronto and asked the driver how he felt about Uber. He said he drives both a regular cab and for Uber and doesn’t mind it at all.