Heather Oliver wasn’t too stressed out about planning her wedding until she tried to book a limousine for the big day.

The Vancouver bride-to-be called several different vendors looking for quotes. She wanted a transfer service to take her from her house to her ceremony, then back home again after the reception ended that night.

She hoped to pay an hourly rate, but one company — Vancouver Prestige Limos — told Oliver that they could only be booked for a minimum of three to five hours.

Two other companies, however, had offered quotes for hourly rates. She emailed Vancouver Prestige Limos back to let them know she’d be taking her business elsewhere, and was shocked by the company’s response.

“Good for you. I hope your marriage lasts.”

“Good for you. I hope your marriage lasts,” an unnamed employee said in an email.

Oliver responded: “How dare you. You must be a pretty miserable person to be so cruel,” adding that she planned to file a complaint.

Then the exchange really took a turn.

“Looks like you must have a lot of time on your hands to be doing childish things like that. Have fun,” the staffer replied.

“And now it’s become quite clear that your marriage probably won’t last, because I really can’t see how anybody can tolerate being married to you. I’ve known you for all of an hour and I’d sooner cover myself in paper cuts and take a lemon juice bath than have anything else to do with you. God bless your future spouse for having the patience to deal with you.”

See the email exchange below. Click for full size. 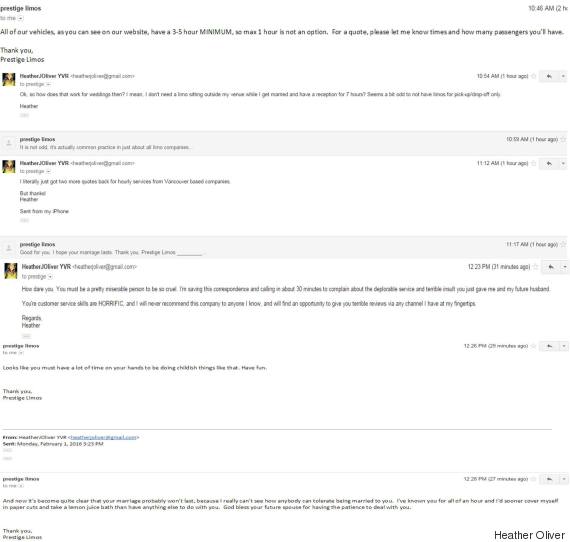 Oliver immediately showed the emails to her fiancé, and the pair “laughed it off.”

But deep down, the comments were hurtful.

“When you’re planning your wedding, usually vendors want to be a part of your day. So I was just really taken aback by the comments,” she told The Huffington Post B.C. on Friday.

“I was pretty hurt. As a bride-to-be you don’t want to be told you’re a nasty person.”

HuffPost B.C. reached an employee at Vancouver Prestige Limos over the phone on Friday afternoon, but he declined to comment.

Oliver said she still plans to book a limo for her wedding on July 1, and that a few insults won’t put a damper on her planning.