What Cashing In On Sharing Apps Means For Your Taxes

CALGARY — The National Energy Board is directing TransCanada to rework its application to build the contentious Energy East pipeline because the document is too hard to understand — even for experts.

The federal energy watchdog, in a letter to the Calgary-based pipeline builder, said it’s not requesting a whole new application.

Rather, it wants the reams of information already filed to be repackaged in a way that is easier to navigate.

The company first submitted its application to build the Alberta-to-New-Brunswick pipeline in October 2014.

The document was 30,000 pages at the time — filling 68 binders in 11 boxes — and the NEB says it has since become even more unwieldy.

One of the more noteworthy changes was a decision to scrap a planned export terminal in Cacouna, Que., due to concerns over the impact on the beluga whale habitat. The project now includes only one marine export terminal in Saint John, N.B.

“When considering the numerous supplemental reports, project updates, errata and amendments coupled with the sheer volume of information presented in the application, the board is of the view that the application, in its present form, is difficult even for experts to navigate,” the board wrote to TransCanada in a letter Wednesday.

“The board is concerned that it will be even more difficult for the general public to comprehend and navigate. The board is also concerned about the impact of this on the fairness and efficiency of the hearing process and the potential burdens on all parties.”

TransCanada has until Feb. 17 to provide a proposed table of contents for the revised version and let the board know when it plans to file the complete document.

“Public participation is a fundamental element of our hearing process,” the board wrote.

“It is critical that, during the hearing process, participants are able to understand the application and easily locate sections of the application most relevant to their interests.” 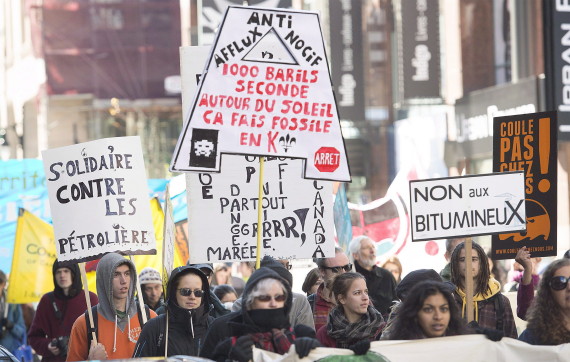 Protestors demonstrate against the Energy East and Line 9B Pipelines during a rally in Montreal, on Oct. 10, 2015. (Graham Hughes/CP)

The $15.7-billion pipeline would ship a million barrels of western crude a day as far east as Saint John. The goal is to connect Canadian crude to domestic refineries as well as international customers.

TransCanada spokesman Mark Cooper said despite the additional work, the company is focused on a 2020 startup date for Energy East.

“This is an opportunity for us to restate our desire to have informed conversations with Canadians about Energy East,” he said.

“Energy East is supportive of taking constructive steps to make the review process as accessible as possible. Therefore, we will take the NEB’s direction and work to prepare consolidated applications in both English and French, to assist all Canadians in better understanding this important infrastructure project.”
Source: HP