Planning Your RRSP In A Stock Market Swoon: Focus On Your Goals And Don't Panic

Chrystia Freeland was in New Zealand on Wednesday to sign the massive 12-country Pacific Rim treaty, a deal opponents warn could eliminate Canadian jobs and damage some sectors of the economy.

That signature comes before the government has finished assessing the economic costs and benefits the deal potentially holds for Canada, she acknowledged. 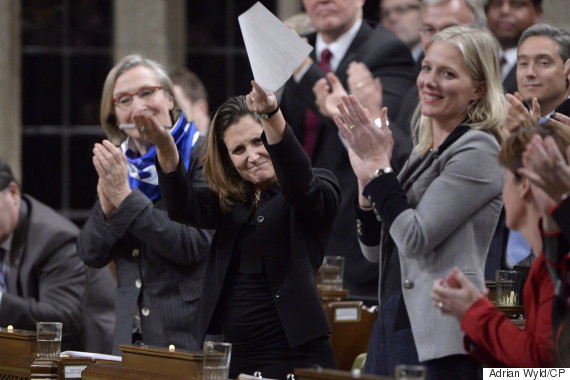 But Freeland has also said on multiple occasions that signing the deal would not necessarily mean ratification, a final step that is up to two years away.

The Liberals have billed the signature as a “technical step” that will allow Canada to stay at the bargaining table.

In the meantime, the government is taking a closer look the TPP’s potential consequences, Freeland acknowledged Wednesday in a conference call from Auckland prior to signing the agreement.

“That is a very important part of the analysis and of the conversation that Canadians need to have,” she said.

Freeland has also requested a thorough study of the agreement by a parliamentary committee and has conducted public consultations. Once the deal is signed, only a majority vote in Parliament would seal its ratification.

During question period Wednesday, the Liberals came under pressure from the opposition New Democrats, who demanded to know why the government would sign the accord without first exploring its potential consequences.

“We said we would study the accord and that’s exactly what we will do,” David Lametti, Freeland’s parliamentary secretary, said in response to one of Mulcair’s questions.

“He says he must conduct studies,” Mulcair shot back, “therefore he just admitted that they don’t have a study — and yet they’re signing it today.”

The wide-ranging accord covers 40 per cent of the world economy and — if ratified — would set new international rules for sectors beyond trade.

Supporters of the TPP have said it would open foreign markets and could bring significant benefits for sectors like forestry, some manufacturing segments and agriculture, especially canola, beef and pork production.

On the other hand, law experts and business leaders, including BlackBerry co-founder Jim Balsillie, have been highly critical of the deal’s intellectual property provisions.

Mulcair has insisted the agreement would kill thousands of Canadian jobs, damage the auto industry and weaken the country’s supply managed dairy and poultry sector.

The deal was negotiated under the former Conservative government, which also offered a $4.3-billion compensation package over 15 years to help the dairy industry cope with the impact of additional imports.

On Wednesday, Freeland said she was “very sympathetic to and mindful of the need for support” should the TPP to come into force.

But it’s too early to say if the Conservative compensation package will remain on the table if the deal is ratified, she added.

She also said Ottawa was well aware of the potential impacts that ratifying the deal would have on the auto sector and the entire production chain.
Source: HP