Canadian Economy Expands In November, But Half Of Industries Have Shrunk In Past Year

Benefits of Breastfeeding: Apparently The Solution To The Economy Is In Our Breasts

That gain followed a flat reading in October and a 0.5 per cent contraction in September. Canada’s economy has shown significant growth in only four of the last 12 monthly readings from StatsCan. 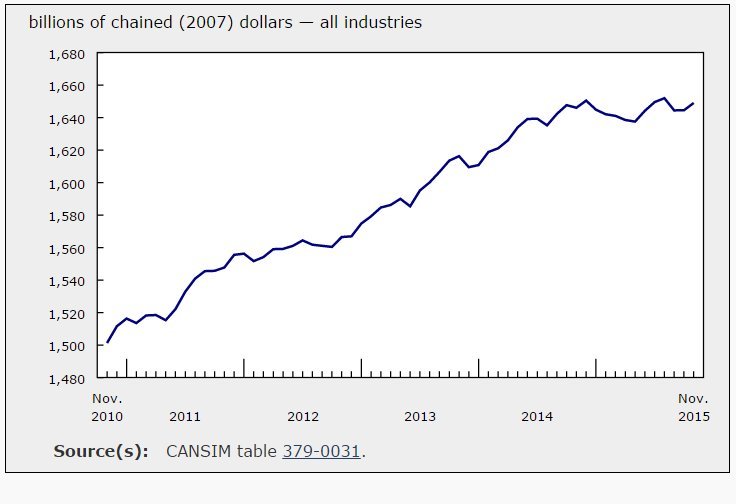 Canada’s GDP has essentially flatlined over the past year. (Chart: StatsCan)

While both services industries and goods-producing industries grew in November, the breakdown by industry shows nearly half of the sectors tracked by StatsCan have shrunk over the past year. Of 20 sectors, nine have seen negative growth year over year.

Not surprisingly, mining, oil and gas took the biggest hit. That sector was 6.4 per cent smaller in November than it was a year earlier. Construction (down 3.6 per cent), manufacturing (down 1.1 per cent) and utilities (down 2.8 per cent) have also been shrinking.

Economists note Canada is shifting ever more towards a service economy, and the latest data bears that out.

While goods-producing industries shrank 2.5 per cent over the past year, the service sector expanded 1.4 per cent, led by arts, entertainment and recreation (up 3.4 per cent), transportation and warehousing (up 2.3 per cent) and real estate, rental and leasing (up 3.2 per cent).

November’s GDP growth was mostly due to increased activity in retail and wholesale trade, energy extraction and manufacturing, StatsCan said.

Wholesale trade bounced back to expand 1.3 per cent in November after shrinking for four-straight months, the report said. Growth in retail trade increased 1.2 per cent following an October contraction of 0.2 per cent, while manufacturing saw an increase of 0.4 per cent after falling for two consecutive months, Statistics Canada said.

Overall natural resources extraction rose 0.6 per cent in November, the report said. Oil and gas extraction increased 2.1 per cent to help offset the weight of the mining and quarrying component, which declined 2.3 per cent.

Downward pressure on GDP — a broad measure of the economy — also came from the finance and insurance sector, which contracted 0.3 per cent for its fourth-straight monthly decline.

The GDP reading was released as Canada limps through the net negative effects of a commodity price shock that began in late 2014 and continues in early 2016.

The figure tees up a potentially weak GDP number for the fourth quarter amid downgraded expectations for the final three months of 2015.

The Bank of Canada recently lowered its GDP forecast for the fourth quarter to 0.3 per cent, down from 0.7 per cent. Earlier this month, the central bank also decreased its GDP prediction for the first quarter of 2016 to 0.8 per cent and for the second quarter to 1.4 per cent.

In the third quarter, however, GDP rebounded by generating 2.3 per cent growth.

— With files from The Canadian Press
Source: HP