Benefits of Breastfeeding: Apparently The Solution To The Economy Is In Our Breasts

The TPP is of immense importance to Canada and, as argued previously, Canada will really have no choice but to follow suit should the Americans ratify the agreement.

However, why this is so is a difficult communications job.

Estimates compiled by the World Bank are that the agreement will increase Canadian GDP by only 1.2 per cent over 15 years. 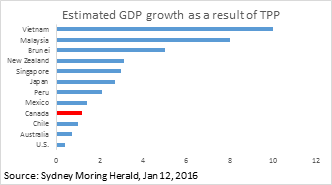 The other benefit commonly touted with signings of bilateral trade agreements to which Canada has become accustomed (increased exports through lowering of tariffs and non-tariff barriers) needs an asterisk with the TPP. That is because the benefits Canada receives under this agreement are also granted to all 11 other parties.

Reductions on beef imports by Japan, for example, are shared with major beef exporters that are also part of the TPP — the U.S., Australia, Mexico and New Zealand. The simultaneous appearance of competition with the new opportunities is going to be new for Canadian exporters and an important point to keep in mind. 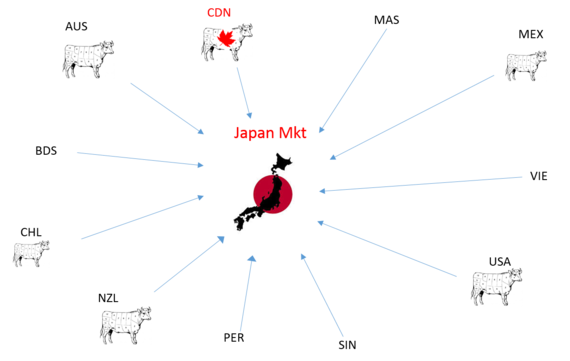 So then, what is the big deal?

For Canada, the TPP is important as insurance against a potential, more radical, future opening of the U.S. market.

The U.S. is and will remain the largest and most important export market for Canada both in direct sales to the U.S. as well as moving goods through the U.S. to other markets. And even though Canada has diversified its trade toward other markets, the volume of growth of exports to the U.S. has still remained fairly consistent in the recent past.

But, in the near term, as growth in emerging markets and China moderates and Canada can no longer ride the commodity supercycle, the importance of the U.S. market, which is growing again, will increase for Canada.

And this is not a bad development.

Canadian exports to the U.S. have been relatively stable and have had a lower overall risk than those in other markets. The U.S. also remains the easiest country for Canadian companies to do business thanks to language, culture and geographic proximity.

All of this underlies the importance of protecting market share in the U.S. as a top Canadian trade priority. And this especially applies to thinking about the TPP.

Once the Americans joined the TPP negotiations, the agreement morphed from an attempt by New Zealand, Chile and Singapore to create an APEC free trade agreement into an attempt by the U.S. to update the NAFTA and expand it across the Pacific.

A potential expansion of the NAFTA to include nine new members and extend the provisions of the agreement and access to the U.S. market to these countries immediately makes defensive considerations an equal or greater priority than thinking about new market opportunities.

“Should Canada not ratify the agreement now and decide to try and join later, it’s doubtful that any of the probably hundreds of exemptions and carve-outs that it currently has would be offered again.”

In the short term, the opening of the U.S. market under the TPP does not appear in sectors of importance to Canada and certainly not to Western Canada. On commodities, Canada’s geographic advantage should mitigate any potential gains by competitors.

In services, an area of importance for Canada, the U.S. decision not to sign on chapter 12 of the agreement, Temporary Entry of Business Persons, should mitigate any increases in competition from the U.S. agreeing to chapter 10, Cross-Border Trade in Services.

Though the TPP has arguably not significantly opened the American market to new competition from other TPP countries, the agreement has made an eventual opening easier and more likely.

One of the innovations of TPP, a response to short comings in the NAFTA, has been to create a “living” trade agreement with specific text in the agreement to allow the addition of new members and to require periodic meetings to monitor and update the agreement.

Should the TPP be ratified and should the mood in Washington D.C. toward trade liberalization alter in the future, and should new competitors such as China and Korea join the trade bloc, then the market for over 70 per cent of Canada’s exports could suddenly become more difficult, especially if Canada is not part of the agreement. This is a risk that the country simply cannot take.

Worse, should Canada not ratify the agreement now and decide to try and join later, it’s doubtful that any of the probably hundreds of exemptions and carve-outs that it currently has would be offered again. In other words, if you don’t like this version of the TPP you’ll be less happy with what we would get later.

Though it will be a tough argument to sell to the general public and businesses who are looking for tangible immediate gains, the prevention of a hypothetical future threat, or basic insurance, is the reason to get behind the agreement.