Prime Minister Justin Trudeau was put on the defensive Thursday after being grilled by Thomas Mulcair over Canada’s intention to sign a controversial trade deal inherited from the previous Conservative government.

“The liberals still haven’t released an economic impact study on the deal,” NDP Leader Thomas Mulcair said in question period. He followed up by asking why the prime minister would sign the Trans-Pacific Partnership agreement amid reports its ratification risks tens of thousands of Canadian jobs.

Trudeau responded by saying trade creates middle-class jobs and economic growth. “And that is why we are a pro-trade party,” he said.

The prime minister added the Liberals have “consistently” pledged to discuss the deal in consultations with Canadians and among Parliamentarians. 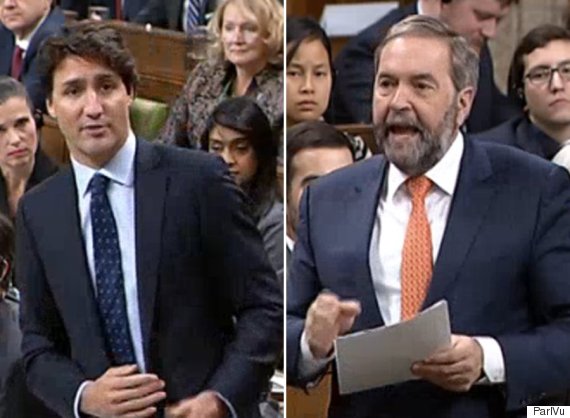 “In order to do so, however, we can’t stop debate on it. And therefore, we will be signing it as a way to consider it through ratification,” Trudeau said.

Mulcair continued to take aim at the TPP and air of secrecy that continues to surround details of the agreement.

“Apparently, the government has no problem signing an agreement that was negotiated in secret,” the NDP leader continued in French. “Does the prime minister often sign things he doesn’t agree with?”

The prime minister responded by saying signing an agreement and ratification are two different things.

“In order to study the proposal, we have to sign it to be able to go to the next step. We want to debate it here in the house, and this is why we’re going to sign it.”

‘Too soon’ for firm no

International Trade Minister Chrystia Freeland announced on a government website Monday that Canada will sign the TPP — a deal, pending ratification, would create the largest global trade deal in history.

Twelve countries, including Canada, Japan, and the U.S., are expected to sign the agreement next week.

“It is too soon to endorse the TPP.”

Freeland said not attending the meeting would have shut the door to future debates about the deal’s possible economic implications. However, she was also quick to caution that signing the deal is a formality, and doesn’t signify the federal government’s intention to ratify it.

“It is too soon to endorse the TPP, it is also too soon to close the door,” she wrote in an open letter. “Signing does not equal ratifying. Only a majority vote in our Parliament can allow the agreement to take force.

“Signing is simply a technical step in the process, allowing the TPP text to be tabled in Parliament for consideration and debate before any final decision is made.”

Essence of crown corporations being ‘traded away’

Some critics lobbying against the deal, including the Council of Canadians, argue the TPP will hurt state-owned enterprises “from acting in the public interest.”

Sujata Dey, one of the group’s trade campaigners, said in a news release last year that the deal will alter the mission of the CBC into a profit-driven model and that Canada Post will essentially act as a private company.

“The essence and mandate of our crown corporations are being traded away in favour of private corporate profit,” she wrote.