What Uber And BlackBerry Taught Me About Our Mental Health System

Justin Trudeau is a “young, exciting” addition to the world stage, according to British billionaire Richard Branson. And the Virgin Group founder is particularly tickled over the Liberals’ promise to legalize marijuana in “a country the size of Canada.”

Branson published a 577-word blog post on Wednesday, speaking highly of the Canadian prime minister after recently meeting him at the World Economic Forum in Davos, Switzerland.

“It is great to see such a large country going in the right direction,” Branson wrote.

“I congratulated him on his commitment to gender equality,” he continued about Trudeau. “I also discussed Canada’s policies on the war on drugs and told him it was wonderful to see a country the size of Canada pledging to legalize and regulate recreational marijuana.” 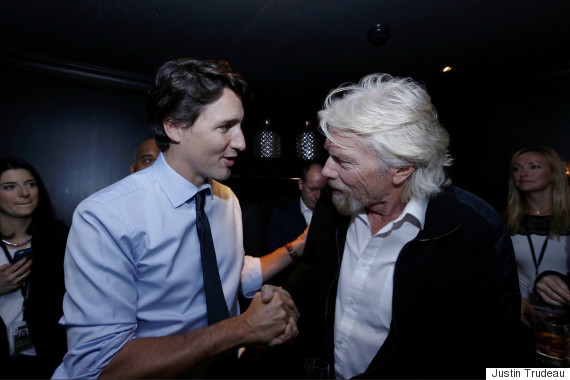 Later in the post, Branson said two of his colleagues from the Global Commission on Drug Policy joined Foreign Affairs Minister Stephane Dion for a meeting. Without releasing any details, Branson relayed some optimism.

“They returned expressing enthusiasm for ambitious drug policy reform in Canada,” he wrote. “I am very hopeful this will stimulate even more progress in other countries in the months and years to come.”

Branson is No. 330 on Forbes’ list of the world’s billionaires with an estimated net worth of around $4.6 billion.

‘Swanning’ and one percenters

On Monday, the Conservative Opposition wasted no time attacking Trudeau on the first day back in Parliament, accusing him of hobnobbing with the world’s elite in Davos.

Interim Tory Leader Rona Ambrose accused Trudeau in question period of “swanning about Switzerland” to “hang out with the one per cent” while Conservative MPs were “at home listening to business owners and volunteers and regular Canadians.”

“Maybe the prime minister should stop using his cellphone for selfies with Leo DiCaprio.”
— Rona Ambrose

Trudeau shot back, saying meetings with leaders such as Jack Ma from Chinese e-commerce giant Alibaba catalyze plans to create jobs at home. Ambrose, however, used another opportunity to poke fun at the prime minister’s vanity.

“Maybe the prime minister should stop using his cellphone for selfies with Leo DiCaprio and pick it up and call Denis Coderre and fight for natural resources,” she said, referring to a growing debacle over the proposed 4,600-kilometre Energy East pipeline.

Trudeau responded by taking a shot at the Conservatives’ record after nearly a decade in power.

“Once again it is interesting that the members opposite are criticizing us for not getting done in 10 weeks what they were unable to do in 10 years,” he said.