WestJet Cuts Back On Scheduled Flights From Calgary, Edmonton

I Support The Energy East Pipeline As A Pragmatic Environmentalist

HALIFAX — Talks between striking newsroom employees at Canada’s largest independent daily newspaper and the company broke off Monday, with the union saying no further negotiations have been scheduled.

In a statement, the Halifax Typographical Union said talks between the 61 newsroom employees ended when the Halifax Chronicle Herald insisted it wants senior unionized editors moved to a non-union production centre. 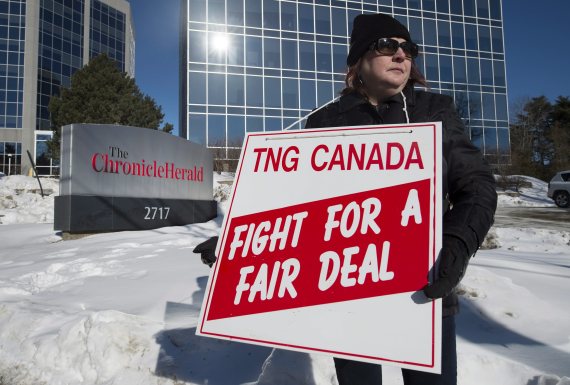 Kelly Shiers, a reporter at the Chronicle Herald, joins other newsroom union members while picketing outside the newspaper’s office in Halifax on Jan. 25, 2016. (Darren Calabrese/CP)

The union says the production centre editors would earn $20,000 to $30,000 less annually after one year at their current rate of pay.

Nancy Cook, the Herald’s vice-president of administration, said in a separate statement that the company offered to drop the contracting out language if the union accepted the production centre.

The editorial staff walked off the job at 12:01 a.m. Saturday after talks broke down earlier last week, only to have the Herald issue and then rescind 18 layoff notices.

The Herald has said it wants to reduce wages, lengthen working hours, alter future pension benefits and lay off up to 18 workers to cope with economic challenges that have beset North America’s newspaper industry.
Source: HP