Soaring Food Prices Are Eating Your Savings At The Pump, And Then Some

Apple Setting Up Research Lab In Canada, Report Says. Will It Be Involved In Driverless Cars?

TORONTO — Canadians may be pocketing a little extra change at the gas pump and on their heating bills thanks to the plummeting price of crude, but experts say soaring food prices are more than offsetting those savings.

“Yes, we’re saving at the pump, but the savings are more than offset by what we’re paying in the food stores.”

The Bank of Canada’s efforts to stimulate the economy last year by slashing its overnight lending rate has been one factor in the loonie’s slide, in turn nudging the cost of fresh produce — which is predominantly imported — higher.

The price of fruits and vegetables climbed between 9.1 and 10.1 per cent last year and that is expected to continue rising, according to a report by the Food Institute at the University of Guelph.

“So much of what we buy as a consumer is imported,” says Perry Sadorsky, associate professor of economics at the Schulich School of Business at York University. “A lower dollar just makes the cost of importing more expensive.”

Meanwhile, gasoline prices have not fallen as dramatically as the price of crude, which is down roughly 75 per cent from its peak in June 2014.

“When you hear about lower oil prices, it does not necessarily translate into lower gasoline prices,” Sadorsky says. “The integrated oil companies have a tendency to keep the price at the pump higher in order to compensate for some of the lost profits they’re incurring on the production side.”

On balance, that means many consumers are feeling pinched. 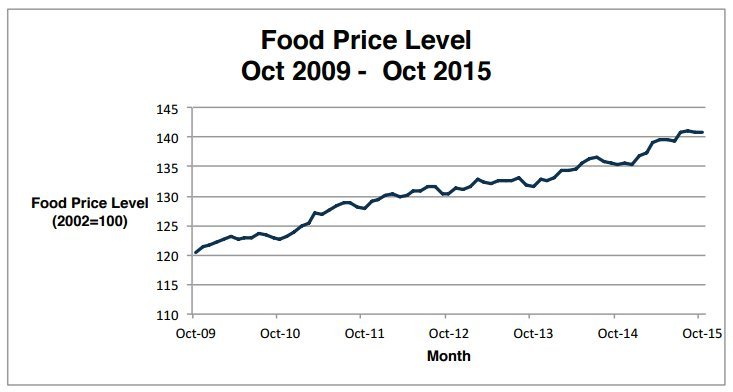 The situation is even worse for low-income families or those living in poverty, many of whom don’t see any savings at all from the reduction in the price of crude.

Leilani Farha, executive director of Canada Without Poverty, says many lower-income families don’t have cars, and often the cost of heat is included in their rent. That means they don’t enjoy even a slight benefit from plummeting crude prices to help offset higher bills at the grocery store, she said.

“Any time our economy falters, it’s always the most vulnerable people who are affected most immediately,” says Farha. “They don’t have savings to rely on, and they rely on money coming in to pay for just basic survival.”

Although higher food prices are hurting Canadian consumers in the short term, Lee says that in the long term, the Bank of Canada expects the benefits of its monetary stimulus to outweigh the negatives.

“Governor Poloz has made it very clear … that the benefits of the lower interest rates take time to work their way through the economy and generate more growth,” said Lee.

“Right now, the lower interest rates — which are driving down the dollar — are generating more costs than benefits. However, in the medium term, the Bank of Canada believes that situation will change. That is to say, the benefits will increase with the passage of time.”
Source: HP