Vancouver Housing Prices Could Be Helped Through Tax On Vacant Homes: Economists

Justin Trudeau To Fly To Davos, With Economy Woes Following Him

“The important programs and services that Albertans rely on and that we ran on, we believe it’s important to keep those in place,” Ceci told reporters at Government House.

“When it comes to infrastructure spending and stimulus, we believe we’re on the right track.”

Ceci was responding to the bond rating agency Moody’s announcing Monday it is shifting its outlook for Alberta to negative from stable while retaining the province’s triple-A rating. 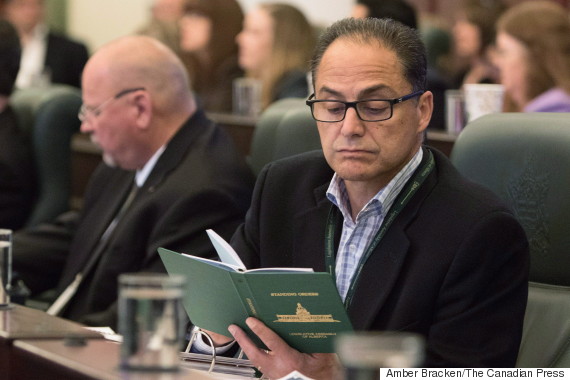 Despite the outlook, Joe Ceci says the province is on the right track. (Photo: CP)

In December, the rating agency Standard and Poors downgraded Alberta’s rating to double-A-plus from triple-A.

The outlooks impact the credit-worthiness of a borrower and can make it more expensive to take on loans.

Moody’s, in a news release, said the change reflects that oil prices, the engine of Alberta’s economy, continue to tumble.

“The negative outlook for the province of Alberta reflects the rising risk that the province’s fiscal position will deteriorate further than previously expected in an environment of protracted low oil prices and deterioration of economic activity,” said Moody’s.

“Moody’s forecasts that revenue shortfalls stemming not only from direct natural resource royalties but also from the broad economic impact of the slump in the oil sector will lead to larger deficits in the short- and medium-term than those budgeted by the province.”

“This will translate into higher debt burdens and a faster draw on reserves than previously anticipated.”

Oil prices that now are hovering under US$30 a barrel for the benchmark West Texas Intermediate have hit the province hard. This year’s budget calls for a deficit of $6.1 billion and thousands of oilpatch workers have been laid off.

“They have affirmed our triple-A credit rating, so that is great.”

Ceci said there are positives in the report.

“They have affirmed our triple-A credit rating, so that is great,” he said. “They have put us on a watch, which really just is a result of oil and where that’s at and its impact on our economy.”

The long-term blueprint the province is pursuing was laid out last October in the 2015-16 budget.

That plan promises hiring freezes where possible but avoids deep cuts in front-line services. It also expands infrastructure spending over the next five years to help spur the economy and to catch up on infrastructure deficits ignored by previous governments.

Those plans comes with a heavy debtload expected to exceed $47 billion by the end of the decade.

The government has already begun taking steps to rein in spending.

Late last year Ceci announced that more than $400 million in new program spending to be launched in this spring’s budget will be delayed or drawn out.

The government has also frozen the salaries for a quarter of its employees — those not in unions — for two years.

The Opposition Wildrose party urged Ceci to stop nibbling around the edges of cost containment.

“Wildrose has long warned the NDP government that without taking meaningful steps to control spending, and limit borrowing, it would do damage to investors’ confidence in Alberta’s credit rating,” Wildrose Leader Brian Jean said in a news release.
Source: HP