Vodka Bottle From LCBO Is Filled With Water Instead

CALGARY — Finance Minister Bill Morneau met with business leaders Friday in the financial heart of Canada’s ailing oilpatch, where he says he got a clearer picture of how challenging the crude collapse has been for Alberta.

“They heightened my sense of concern, which was already pretty high about making sure that we deal with challenging economic situation in Alberta,” he told reporters following meetings with oil and gas industry executives and the Calgary Chamber of Commerce. 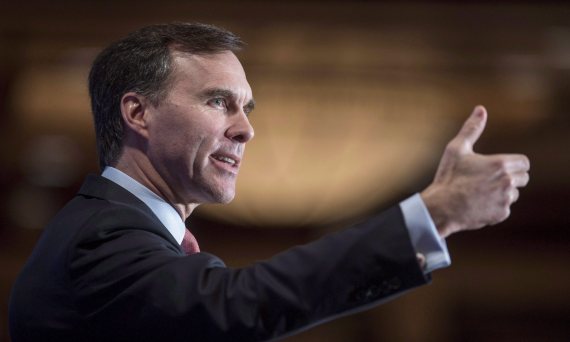 Morneau had nothing new to announce on measures to bolster Alberta’s economy following the pre-budget consultations, but said the province stands to benefit from the Liberal government’s promise to invest in infrastructure and signalled that tweaks to the equalization program aren’t in the cards.

His remarks came as North American stock markets wrapped up one of their most turbulent weeks in recent memory, as oil prices and the dollar plunged further amid disappointing economic news at home and abroad.

As Alberta’s unemployment rate rises, there’s the opportunity for “really great workers” to be hired to construct those projects, Morneau told a town hall meeting with University of Calgary students.

“They heightened my sense of concern, which was already pretty high about making sure that we deal with challenging economic situation in Alberta.”

Morneau says he discussed some ideas for projects with Calgary Mayor Naheed Nenshi during his visit to the city.

The Liberals have promised an additional $5 billion in infrastructure spending in each of the first two years of their mandate.

The Canadian Press learned earlier this week the government is now looking at moving up the spending schedule in response to worsening economic conditions, but Morneau did not provide any specifics during his Calgary visit.

“We are looking to make infrastructure investments that are prudent and responsible and in cases where we can find prudent, responsible projects that we can embark on quickly, we will do so,” he told reporters

During the student town-hall, Morneau was grilled on whether the equalization system — transferring funds from have to have-not provinces — could be tweaked to help resource-dependent provinces like Alberta weather the crude price rout, especially since Alberta has historically paid so much into the system.

Morneau said opening up a debate with the provinces over the formula would be “quite challenging.”

“It would be something we’d want to do with a great deal of caution because we want to make sure any outcome is something that we’re comfortable with. It’s not something we’re talking about right now,” he said.

Fourth-year political science student Caitlyn Madlener didn’t like that answer and stepped up to the microphone in the lecture hall to take Morneau to task.

Madlener, who said she doesn’t belong to a political party but is on the “right side of things” ideologically, called Morneau’s remarks on equalization “insulting.”

She said she’d like to at least see the federal government and premiers open the discussion.

“It frustrates me, especially at a time like this.”
Source: HP