ANZAC, Alta. — One worker was killed and one critically injured Friday afternoon in an explosion at an oilsands plant near Fort McMurray, Alta.

Nexen Energy ULC issued a news release saying there is no immediate danger to the neighbouring community or to personnel still on site at the Long Lake plant. 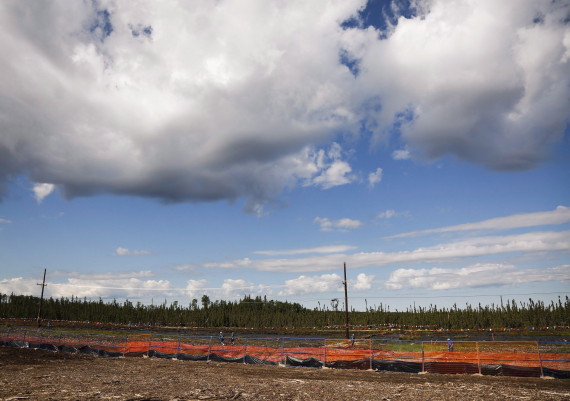 A blast at Nexen Energy’s Long Lake facility, seen in July 2015, killed one person and injured another. (Photo: Jeff McIntosh/CP)

“Our emergency response plan has been activated and response personnel, including first responders from the Regional Municipality of Wood Buffalo, are on site,” the company said.

“The affected facility has been shut down and we are stabilizing the scene.”

Pam Sharpe of Occupational Health and Safety said the blast occurred at 3:20 p.m. inside a building at the facility and that the injured worker was severely burned and taken to hospital.

By late Friday, he described the situation as stable.

“Even though the investigation is in its early stages, we do not believe this explosion to be suspicious in nature.” — RCMP

“No public safety concern at this time,” he said. “No concern in that sense.

“Anytime that we respond to an incident such as this, we always want to rule out foul play or any sort of suspicious occurrence. Even though the investigation is in its early stages, we do not believe this explosion to be suspicious in nature.”

Both OHS and the Alberta Energy Regulator dispatched staff to the site.

“This afternoon Nexen notified the AER of an explosion,” said AER spokeswoman Carrie Rosa. “They’re in the process of shutting down the facility and have established an emergency response centre.”

The plant is 10 minutes south of a small community called Anzac.

Calgary-based Nexen Energy ULC, acquired by China’s state-owned CNOOC Ltd. more than two years ago, laid off about 60 employees at the plant in November.

The company said at the time the job cuts would improve the plant’s technical and operational performance.

The Long Lake plant was also the scene of a pipeline rupture that leaked five million litres of a mixture of bitumen, produced water and sand into muskeg last summer.

The company shut down the Long Lake plant while it complied with a pipeline suspension order from the AER, which had determined Nexen was not complying with pipeline maintenance and monitoring regulations.

The suspension order was lifted in September and the plant returned to full operations.

Long Lake is designed to produce up to 72,000 barrels of bitumen per day.