Torstar is selling its printing plant and introducing a voluntary severance plan for employees, internal emails obtained by The Huffington Post Canada show. The changes will affect more than 300 staff altogether.

The company announced Friday that 220 full-time staff and 65 part-timers will lose their jobs at the printing plant when the work is outsourced to Transcontinental in July. The company will save about $10 million a year, but still needs a buyer for the Vaughan, Ont. plant and surrounding land.

Torstar’s flagship publication, the Toronto Star, has begun negotiations with its union toward a transition.

“Jobs will be cut in a number of departments and I’m sorry to say that our newsroom is also affected,” one email read. Twelve temporary contractors in editorial will also be cut early, most of whom worked on the Star’s new tablet publication. One permanent employee was also laid off. 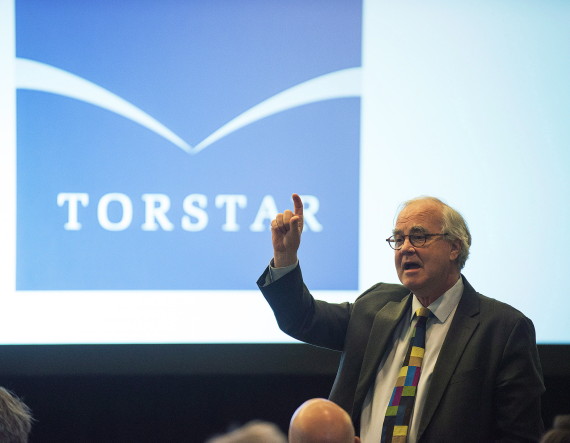 John Cruickshank, publisher of the Toronto Star, answers a question at the Torstar annual general meeting in Toronto on May 7, 2014. (CP)

StarTouch, the company’s free tablet app, was launched just last September. The company promised it would “revolutionize” the way readers get their news. They created the app with “a degree of experimentation and uncertainty about what was needed in the marketplace,” the email said. Between 70 and 80 people were hired for the StarTouch launch.

StarTouch’s user base is growing, the note to employees said, and long-term success “will take time.”

The app was launched with “a degree of experimentation and uncertainty about what was needed in the marketplace.”

Last year, the Star took down its paywall after launching digital subscriptions less than two years before. “Digital revenue continues to be a work in progress for virtually every media company,” the Friday morning email said.

Torstar is also launching a voluntary severance program for employees represented by union Unifor. “These decisions are being made because of the very challenging market conditions that are affecting the Star and other media organizations,” publisher John Cruickshank wrote in another email.

— With files from The Canadian Press