Alberta's Recession Will Be The Longest Since 1982: ATB

KITCHENER, Ont. — Shifting away from reliance on oil and other commodities is key to Canada’s economic recovery and future growth, an upbeat Prime Minister Justin Trudeau said on Thursday.

Speaking at the opening of Google’s new Canadian headquarters, Trudeau acknowledged the pain many people are feeling amid an unprecedented slump in oil prices.

“The recent troublesome news coming out of Alberta and elsewhere is, unfortunately, not a surprise — we saw the trend lines coming,” Trudeau said. 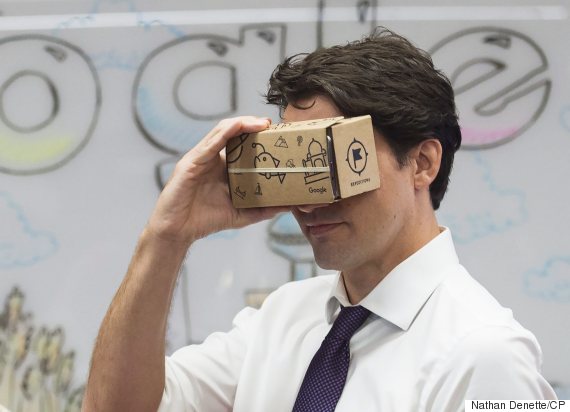 “That is why we put forward an ambitious agenda to invest in Canada, to count on Canadians to be able to bounce back from low commodity prices by diversifying.”

Despite the “difficult times,” Trudeau said he was optimistic about the country’s prospects, saying the opening of Google’s 17,000-square-metre facility was an example of the “positive news” in the economy.

Canadians, he added, have much to offer the world in terms of innovation and forward thinking.

“There are tremendous bright spots,” he said.

Trudeau spoke of the increasing importance of the high-tech sector to the country’s economic future, with computers and how to program them critical to the sector’s success in a world undergoing “extraordinary changes.”

During his tour of Google, Trudeau chatted with children taking part in a computer coding workshop. Education that includes such training, he said, is vital.

“Not only am I a former teacher but I also, when I was studying engineering, got half-way decent as a coder in C++,” he said later.

“We need to do a lot better job of understanding what coding is and how it’s important, how to program, how to problem solve.”

Google first located to the Kitchener-Waterloo region of southwestern Ontario — which also sports BlackBerry’s headquarters — in 2005. Over the past decade, the region has become an IT hub, with hundreds of tech start-ups calling the area home.

The new headquarters, which will house Google’s national development team, features themed floors, a barista bar, food no more than 50 metres from any employee, a huddle space and rock-climbing wall.

Trudeau, who made optimism a central tenet of his election campaign last fall, recalled visiting Google’s offices in Montreal a few years ago, where he said he played on a climbing wall and unicycle.

That kind of photo-op activity is out of the question now, Trudeau said.

“There are limits as to how much people are happy with a geek prime minister and I know I’m pushing those limits.”

Earlier in the day, the Liberal prime minister visited BlackBerry’s HQ, and stopped by at the University of Waterloo — which supplies many of Google’s engineers — to announce $12 million for research into clean-water technologies.
Source: HP