EDMONTON — Premier Rachel Notley says the proposed expansion of a pipeline to the B.C. coast is not just in Alberta’s best interests, but is the best thing for Canada as well.

“This important pipeline infrastructure will support an integrated energy economy in Canada that will be more attractive to investors, which in turn will generate more economic activity Canada-wide,” Notley said Tuesday in a written submission to the National Energy Board.

A three-member board panel is hearing submissions on its environmental assessment of the 1,150-kilometre Kinder Morgan Trans Mountain pipeline, which carries crude oil and refined products from Edmonton to terminals in the Vancouver area.

Kinder Morgan is looking to twin the line to almost triple capacity to 890,000 barrels a day.

The company says there is enough demand on the line to make the expansion worthwhile, and Notley agrees.

In her letter, she said Alberta has abundant oil resources for an expanded line. The province currently isn’t getting a fair return on its oil because lack of pipeline capacity is restricting sales to just one buyer — the United States, she said.

“The loss from price discounting is of such size and persistence that it cannot be in the Canadian public interest, and should be weighted heavily by the National Energy Board in its considerations.”

Getting more oil to west coast ports would allow for access to Asian markets such as China.

She cited reports that estimate an expansion could increase western Canadian crude oil revenues by $73.5 billion in the first two decades of operation.

Kinder Morgan is working to clear the final hurdles in the evaluation process.

The energy board panel is set to inform the federal cabinet on May 20 whether it approves the project. Ottawa then has three months to make its decision.

British Columbia has some concerns

On Monday, the British Columbia government said it can’t support the line as it stands because Kinder Morgan has failed to meet the province’s five conditions for approval.

In particular, Kinder Morgan has not spelled out plans on how it would deal with oil spills on land and on water, the province said.

B.C. also wants any aboriginal concerns addressed and is demanding a fair share of revenue for having the line go through its territory. 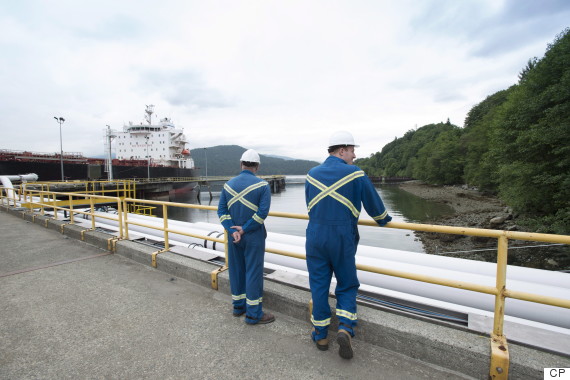 Kinder Morgan employees stand on the dock at the Trans Mountain Expansion Project in Burnaby, B.C. in June 2015. (Jonathan Hayward/CP)

The pipeline debate is set against the grim backdrop of free-falling world oil prices that have gutted the Alberta government’s bank account and sent out recessionary ripples across the country.

West Texas Intermediate, the benchmark price for Alberta’s oil, has fallen by more than two-thirds since the middle of 2014 and is dipping below US$30 a barrel.

“Everything is going to be reassessed … with these commodity prices being as low as they are,” said Ceci.

In this budget year alone, low oil prices have reduced the expected revenue from non-renewable resources by $6 billion.