Canadian Dollar Dips Below 70 Cents U.S. For First Time Since 2003

Powerball Canadian Winner Could Haul In Hundreds Of Millions More Than A U.S. One

TORONTO — Canada’s dollar dipped below 70 cents U.S. on Tuesday for the first time in nearly 13 years.

The currency’s value fluctuates on a minute-by-minute basis but fell to as low as 69.89 cents U.S. before noon ET.

It was the first time the loonie was below 70 cents U.S. since the spring of 2003, according to Bank of Canada data. 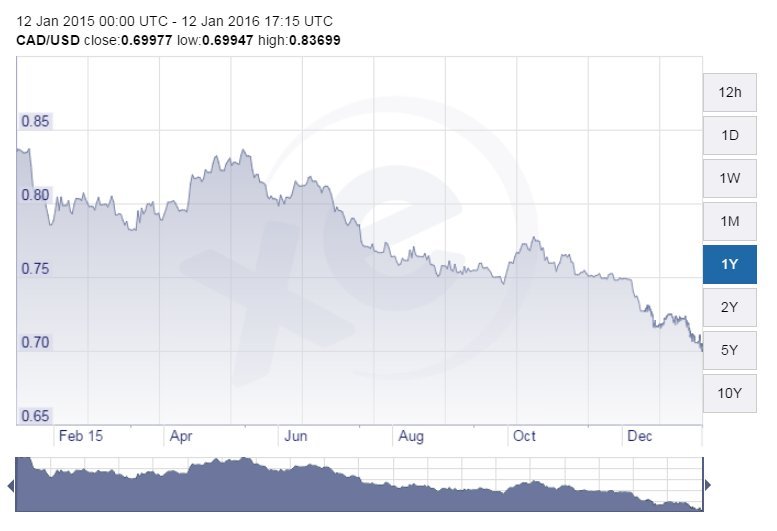 The Canadian dollar has fallen from more than 83 cents U.S. a year ago to less than 70 cents U.S. on Tuesday. (Chart: xe.com)

Patrick Leblond, an expert in finance at the University of Ottawa, said market traders are more concerned with the fundamental challenges facing the loonie than its plunge below an arbitrary price point.

“I’d like to believe they’re a little smarter than that,” he said.

The currency has been sinking for some time as a result of lower oil prices and other factors and fell below 71 cents U.S. for the first time in more than a decade last Wednesday.

Combined with recent volatility in stock markets across the world, he said, that global uncertainty is also causing people to flee for the safe haven of U.S. Treasury bonds, which pushes the value of the greenback higher against all other currencies, including Canada’s.

“The U.S. dollar becomes a refuge, and that’s what we’ve seen in the last few days,” he said.

The loonie is heavily influenced by the global price for oil, one of the country’s major exports.

Crude oil futures were trading just above US$30 a barrel, another multi-year low, as the loonie sank Tuesday morning.

The last time Canada’s dollar was worth more than the greenback was about three years ago, in February 2013.