Rachel Notley Snaps Back At Kevin O'Leary's Call For Her Resignation

MONTREAL — Federal Finance Minister Bill Morneau insists the government has a plan to grow the economy but wouldn’t say what additional steps he’s prepared to take should the loonie and price of oil, both of which dropped to levels not seen in more than a decade, continue to fall.

“We’ll watch every indicator … (but) we’re convinced that our program is the right one to help us grow ourselves out of the situation,” he said Tuesday during pre-budget consultations in Montreal.

Morneau also wouldn’t say if he’s prepared to accelerate infrastructure spending to give the economy an early kick-start. 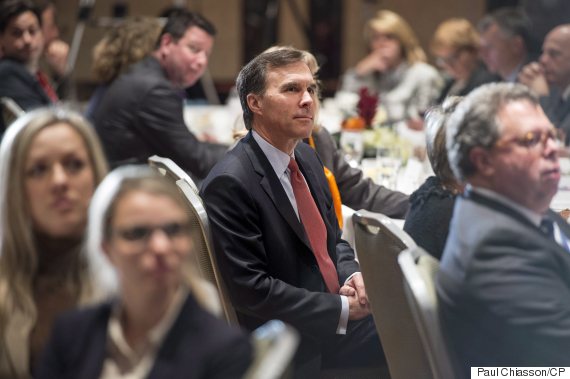 His comments came on a day when the Canadian dollar bobbed above and below the 70 cent-U.S. mark and crude briefly dipped below US$30 per barrel.

Morneau said he understands Canadians are watching the dollar and price of oil closely. But he said lowering taxes for the middle class, adding the Canada child benefit and investing $125 billion over a decade in infrastructure is the approach voters endorsed in the election that put the Liberals in power.

He also warned that there are no “quick, easy fixes” for the economy.

“Going forward, it is very likely that global economic conditions will remain unfavourable, and that subdued commodity prices will persist,” he said in a luncheon speech to the Montreal Council on Foreign Relations.

“We’re convinced that our program is the right one to help us grow ourselves out of the situation.”

While the performance of the U.S. economy has been encouraging, he said countries such as Brazil, Russia, India and China are unlikely to boost growth as analysts had previously expected, adding that there has never been a better time to make targeted investments.
Source: HP