Vancouver's Western Front, Critical Of Developers, Gets $1.5M From Developers

TORONTO — The pediatric surgeons hover over a tiny heart, gently retracting delicate inner structures and attaching a graft with impossibly intricate stitches to repair a congenital defect that would mean certain death within days of birth.

But this heart isn’t inside the chest cavity of a newborn; it’s a 3D-printed model being used at Sick Kids Hospital in Toronto to train cardiac surgeons from around the world in some of the most complex operations they will ever perform during their careers.

About a dozen trainees — from Canada and such countries as Norway, Oman, Mexico and the United States — have come to watch master surgeons demonstrate the highly complicated techniques used to repair a number of congenital heart abnormalities and to safely practise those skills on models of their own.

Three-dimensional copies have been created of five hearts from real infants with cardiac anomalies using a high-tech 3D-printer, which almost perfectly reproduces the organ’s structure using a photopolymer resin, based on sophisticated MRI and CT imaging.

“Each of the models represents a very specific form of disease that is very different,” says Dr. Glen Van Arsdell, chief of cardiovascular surgery at Sick Kids. “I can look at the model and tell you what the diagnosis is.” 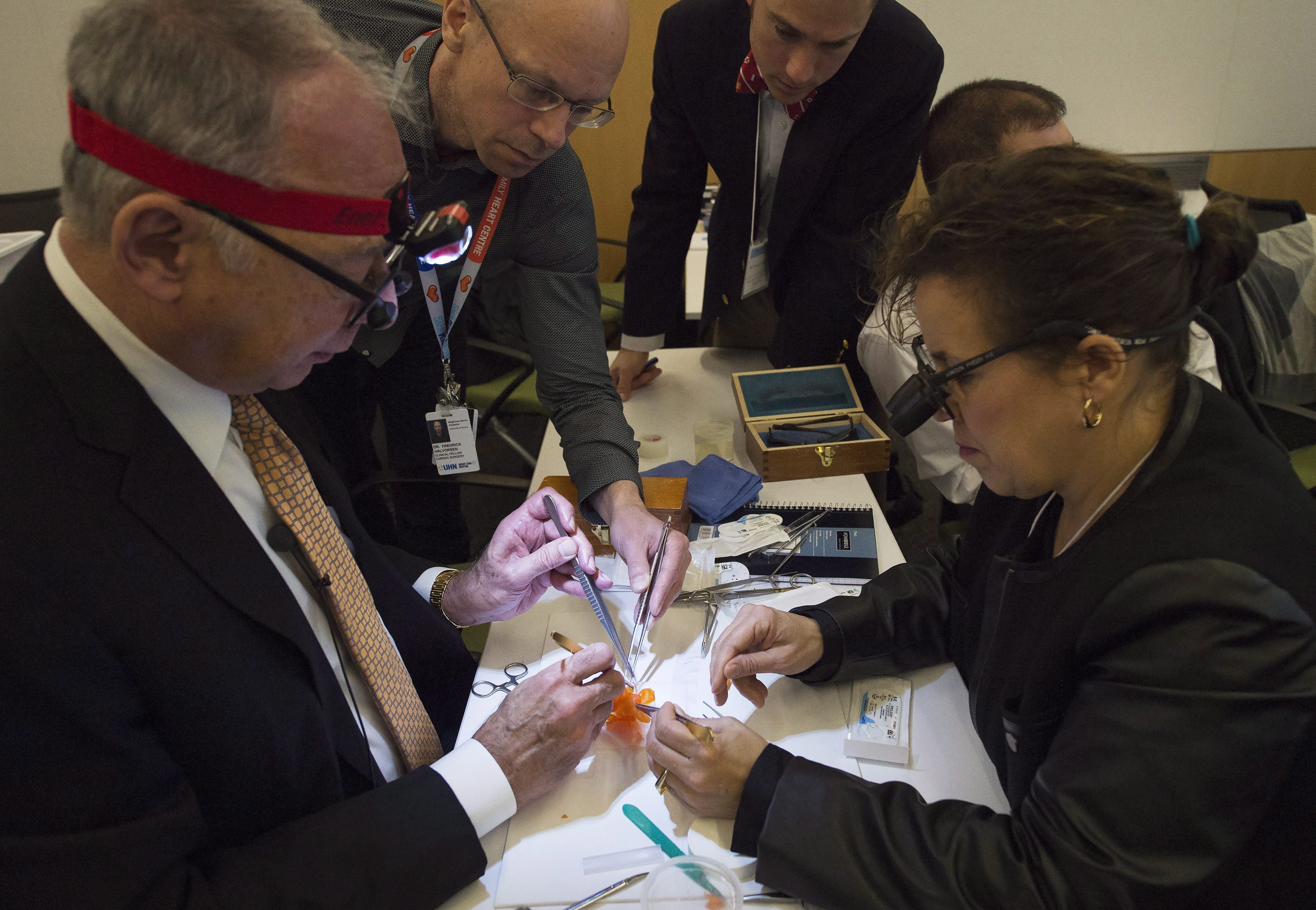 Dr. Thomas Spray, left, chief of the Division of Cardiothoracic Surgery at The Children’s Hospital of Philadelphia trains and is assisted by Dr. Camille Hancock Friesen, Chief Pediatric cardiac surgeon at IWK Halifax hospital as he performs the Norwood Procedure on 3D model newborn heart with hypoplastic left heart syndrome at the Hospital for Sick Children, in Toronto, on Thursday, Jan. 8, 2016. (Canadian Press photo)

The 3D-printed hearts — some orange, others whitish in colour — were produced by Dr. Shi-Joon Yoo, a cardiac radiologist at the hospital.

Depending on its size, a duplicate of a child’s heart can take anywhere from four to 12 hours to produce, as layer upon layer of the resin is built up, he says.

While the current cost is somewhat prohibitive – estimated at about $2,000 per model — Yoo says the technology means hundreds of copies can be printed after imaging a single child’s heart to demonstrate a particular defect.

“Anybody can practise on the same structure, so that is the real value of that.”

Van Arsdell says the trainees have come to Toronto to learn procedures that would typically take years to learn by watching and assisting senior surgeons before they would be allowed to perform the operation on their own. For some, such expertise isn’t available in their home countries.

“So this is a way of doing that in a much more rapid fashion.”

Some of the operations would never have been done before by these surgeons, he says, adding that the teaching session provides mentoring in an environment that doesn’t  jeopardize patient health.

“Some of them will go into positions where they will be further mentored in the clinical setting. Some of them will be in developing countries where this is going to be their responsibility, and they’re here to advance their skills and ability to provide for their patients.”

With such highly intricate surgery, “the consequences are dire if you don’t get it exactly right; this is a way to practise it when the consequences are not dire,” Arsdell says. “And if it’s not quite right, we can advise the trainees or they can modify without having any problems for a real patient.”

Dr. Juan Roberto Contreras of Temuco, Chile, says he does cardiac surgery only in adults but wants to expand his practice to children in the coming years.

“I think this is a really good option, because initially when we are students we didn’t have the opportunity for making this operation in my country,” he says, working on a model with the hallmarks of a particularly complex congenital abnormality.

That sentiment is echoed by Dr. Ala Alwan, who has travelled to Toronto from Baghdad. “It’s a great opportunity to do these procedures on these models because we don’t have such models in our country, and we don’t do such procedures because they are very complicated.”

Alwan refers to Van Arsdell and other teachers at the session — among them, Dr. Thomas Spray of the Children’s Hospital of Philadelphia — as giants in the field of pediatric heart surgery.

Spray, who demonstrated one of the most technically challenging surgeries, says the beauty of 3D-printed models is that they represent the heart of an actual patient, with anatomy that matches what doctors would confront in the operating room.

“Obviously training somebody to do that in the operating room is going to be very difficult because you have a patient’s life at stake,” says Spray, chief of cardiothoracic surgery at the U.S. hospital.

“So being able to work on a true representation of what we see clinically is very valuable for training people in how to put these things together without any problems. Then they can take that to the operating room.”

While the resin currently used is superior to earlier 3D-printing materials, the models still don’t feel quite life-like and are weaker than real heart tissue, says Spray, who nevertheless calls them good for training.

Some centres have begun using the technology to create organs or sections of tissue modelled on a specific patient’s anatomy in preparation for a complicated surgery, perhaps one that has never been performed before; doctors use the models as surrogates during practice runs to help plot out the operation.

Still, Spray foresees a day when 3D-printing could become a common and integral component of personalized medicine.

“We hope that as this technology progresses, it will become easier to do and more inexpensive and can be literally used to design individual operations for individual patients.”