BANGKOK — A Thai cosmetics company quickly pulled a video in which an actress wears blackface and promotes a skin-whitener with the slogan: “You just need to be white to win.” The retraction did little, however, to stem a debate the ad ignited about the regularity of racist advertisements in the Southeast Asian country.

The online ad for the new product called “Snowz” featured porcelain-skinned Thai movie star Cris Horwang talking about being an aging actress in a competitive industry.

“If I stopped looking after myself, everything that I have worked for — all the investment I have made to keep myself white — would disappear,” says the 35-year-old actress. “New stars would replace me, I would fade away.”

As she speaks, a smiling, younger woman enters the picture and Cris’ own image darkens to charcoal black.

A male voice says, “You just need to be white to win.” 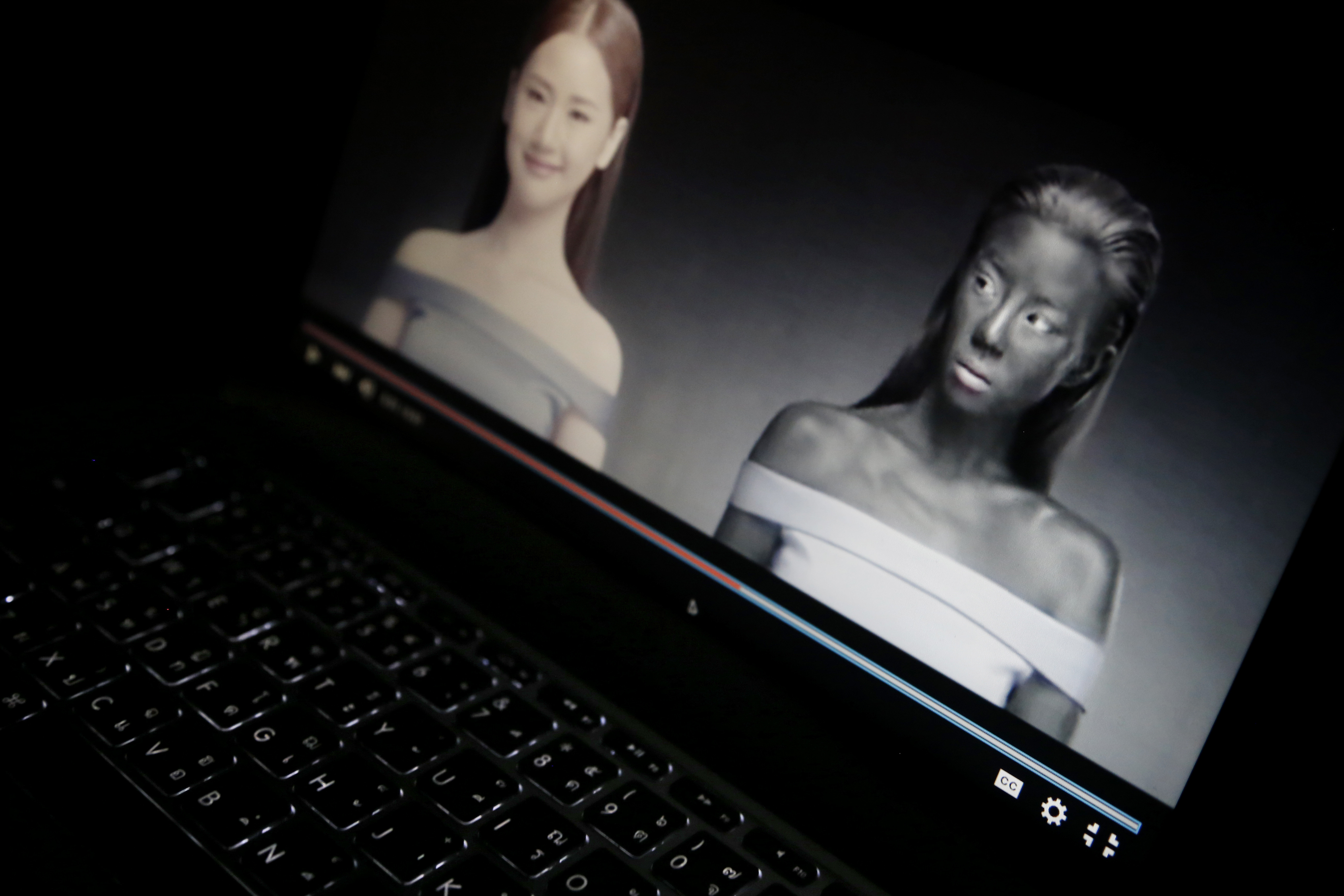 A tirade of criticism erupted after the video was launched online Thursday. Online commentators labeled the ad as racist and ignorant, while some heaped criticism on the actress for accepting the job. Others called it a strategic way to attract wide attention and boost sales.

“Ewwwwwww,” was the reaction of 28-year-old Jutamas Tritaruyanon, one of many to post their disapproval on Facebook.

“This ad is so obviously racist and another attempt to brainwash Thai women,” Jutamas, a Bangkok-based office worker, told AP. “They’re saying that being dark is ugly. It’s a narrow-minded and disgusting attitude.”

The Thai cosmetics company Seoul Secret issued a “heartfelt apology” in a statement Friday saying it had pulled the video clip and related advertisements.

“Our company did not have any intention to convey discriminatory or racist messages,” the statement posted on its Facebook page said. “What we intended to convey was that self-improvement in terms of personality, appearance, skills and professionalism is crucial.”

The ad is hardly the first to use racial stereotypes in Thailand, where beauty is often characterized as fair and delicate. Darker skin is often associated with rural lower-class Thais, and the country has an enormous industry in skin-whitening products and cosmetic clinics to help customers emulate the porcelain complexions of the Bangkok elite.

TV commercials for skin-whitening products regularly promote the idea that white is beautiful. 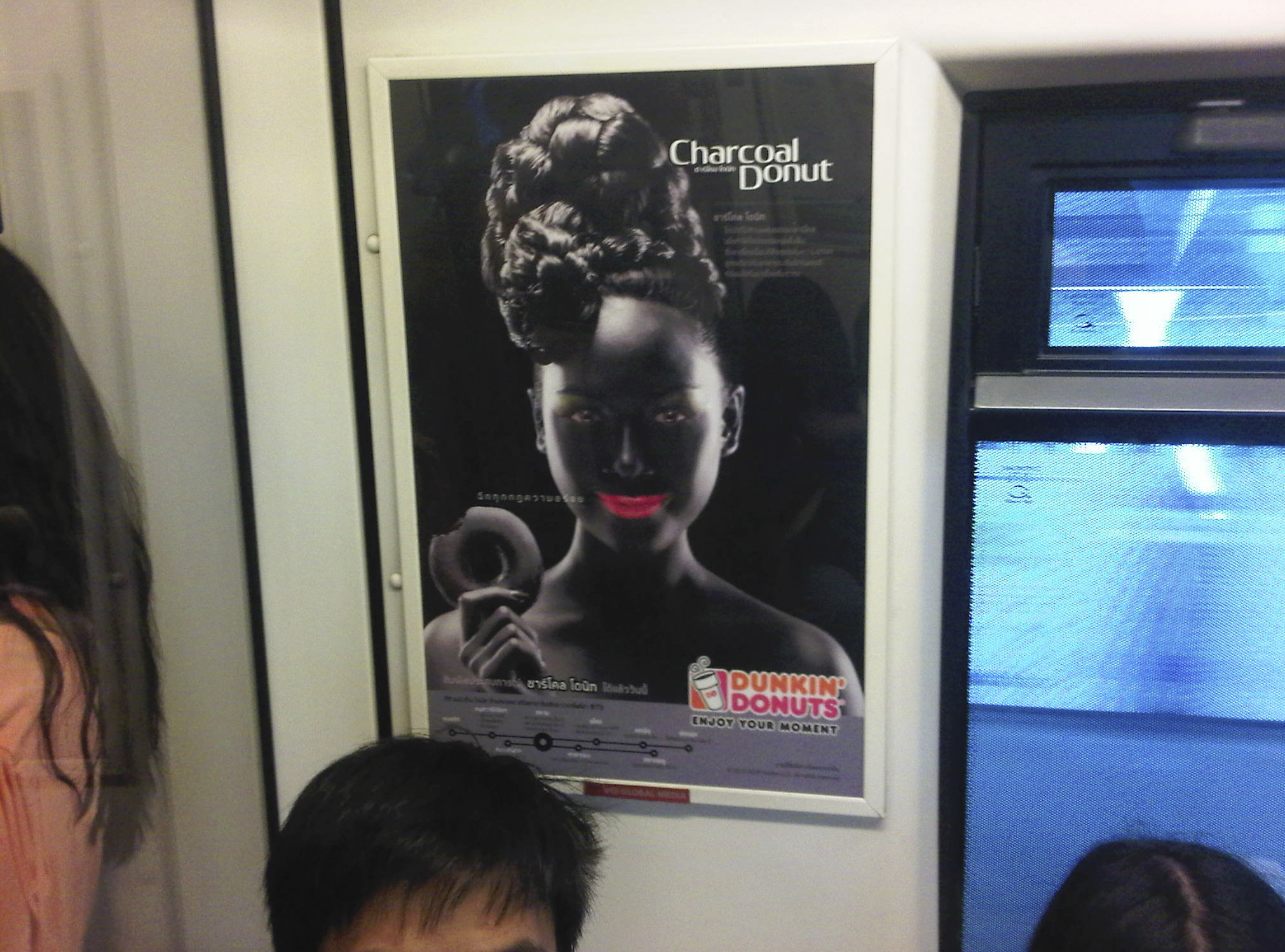 A Dunkin Donuts ad featuring a model in blackface, on a commuter train in Bangkok, Thailand, Friday, Aug. 30, 2013. (AP photo)

In 2013, the Dunkin’ Donuts franchise in Thailand used a female model in blackface makeup to promote a chocolate doughnut. The company’s CEO in Thailand initially dismissed complaints about racism, but the U.S. parent company quickly apologized and pulled the ad.

An herbal Thai toothpaste says its dark-colored product “is black, but it’s good.” A longtime Thai brand of household mops and dustpans called “Black Man” uses a logo with a smiling black man in a tuxedo and bow tie.