“Our commitments around helping aboriginal Canadians with their very significant challenges are critically important to us,” Morneau told students as he fielded questions in an online forum with universities across the country.

“You can be sure that that’ll be high priority in our coming budget.”

Morneau has launched pre-budget consultations in advance of the Liberal government’s fiscal plan, to be introduced in the coming months.

“You can be sure that that’ll be high priority in our coming budget.”

He said Canadians gave the Liberals a mandate to follow through on their campaign promises — although he also acknowledged the economic situation is worse than they had anticipated.

The Liberals made several key promises to indigenous Canadians that were not costed in the party’s platform. They include delivering on all 94 recommendations from the Truth and Reconciliation Commission’s probe of residential schools and ending all boil-water advisories on reserves within five years.

The party has, however, shied away from a promise to run annual deficits of no more than $10 billion over the next two years. Before he won the election, Prime Minister Justin Trudeau vowed to respect the upper limit for deficits unless the economic situation got “radically worse.” 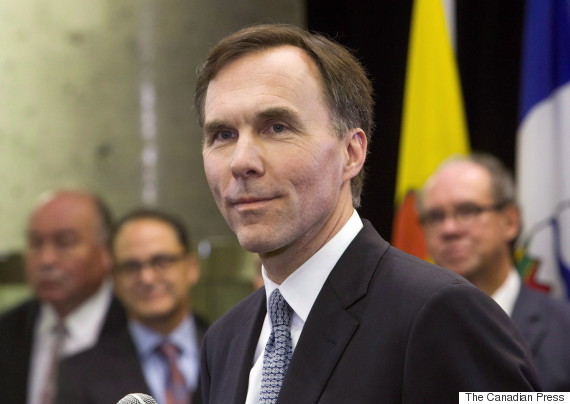 Trudeau’s Liberals won on a platform that planned to pump billions into infrastructure projects, which the party argues will revive the hobbled economy and create jobs.

Analysts, however, have warned that Canada is on a shakier fiscal footing than the Liberals had anticipated and that the country could be on track for much deeper shortfalls.

“So, we find ourselves, unfortunately, with a situation that’s more difficult than expected.”

Morneau acknowledged Wednesday that Canada faces weaker economic conditions than it did just a couple of months ago, particularly amid still-falling oil prices and fading global growth.

“So, we find ourselves, unfortunately, with a situation that’s more difficult than expected,” he said in French in response to one question.

Morneau will travel across the country next week to seek input as he draws up his first federal budget.

If the pre-budget questionnaire is any indication of the new government’s priorities, the budget will stress goals the Liberals started highlighting months before the election. Those include enriching the so-called middle class, investing in infrastructure and tackling environmental concerns without hurting the economy.
Source: HP