U.S., Chinese Manufacturing Activity Tanks, And The World Is Getting Worried

Albertans Could Get Fatter As Economy Shrinks

A British dad finally has his money back after his seven-year-old racked up more than C$8,000 (£3,911) while playing an iTunes game.

Mohamed Shugaa, who lives in Crawley, convinced Apple to refund him after his son Faisall unwittingly made purchases while playing the Jurassic World game, according to Metro.

While Faisall knew his dad’s Apple ID password, he didn’t realize that the game was charging him, because it uses “Dino Bucks.”

Mohamed, who owns a carpet centre, only learned of the charges when he tried to pay suppliers and his card was declined, according to the Telegraph.

When he called his bank, the fraud team asked if he was aware more than 60 transactions in five days, totalling more than C$8,000 with iTunes.

I’m 32 years old, why would Apple think I would be spending thousands of pounds on buying dinosaurs and upgrading a game?

He said he doesn’t understand why Apple didn’t alert him to the payments.

“I went crazy. I was so mad. I’m 32 years old, why would Apple think I would be spending thousands of pounds on buying dinosaurs and upgrading a game?” he told the newspaper.

But this is far from the first time that parents have faced this type of situation.

Apple refunded another British dad about $8,200 after his eight-year-old daughter spent his money in games like My Horse, Campus Life and Smurfs’ Village, The Sun reported.

The company faced a class-action lawsuit in 2011 from parents who believed the App Store made it too easy for kids to make purchases by mistake while playing free games, according to Apple Insider.

When Apple settled in 2013, it said it would offer a $5 iTunes credit to those who said a minor made unauthorized purchases, as well as an equivalent credit for amounts over $5 and a full cash refund for amounts over $30.

The App Store also added a warning on free games with in-app purchases. 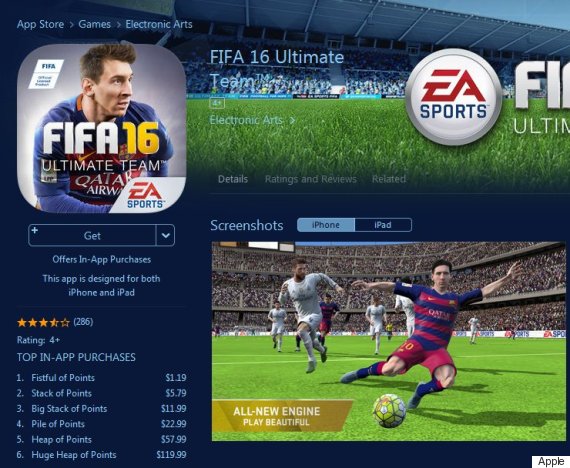 Harry Wallop, who is also the Telegraph’s former consumer affairs editor, wrote in a 2014 column that despite knowing better, he’s fallen into a similar situation.

He said he wanted to blame Apple and the game maker for allowing in-app purchases, but admitted that it was mostly his fault.

“Parenting is about endlessly lurching your way from one mistake to another. It was unfortunate this was a particularly expensive one.”