TORONTO — Canada’s highest-paid CEOs saw their compensation dip two per cent from 2013 to 2014, but they still raked in an average of $8.96 million each, according to a new study.

The think-tank that conducted the research, the Canadian Centre for Policy Alternatives, says that’s 184 times more than the average wage in Canada.

Between 2008 and 2013, the country’s 100 top-paid CEOs saw their compensation climb about 25 per cent to $9.2 million — roughly twice as fast as the average wage for Canadians. 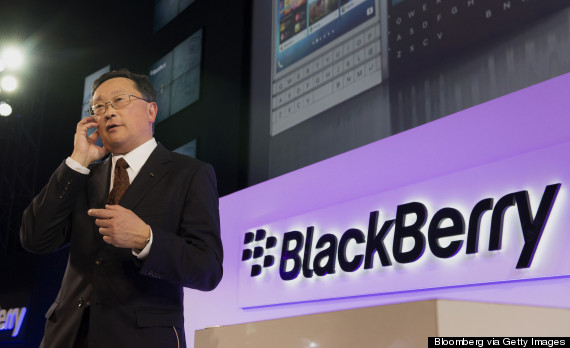 The highest paid CEO in the study was Blackberry’s John Chen, who raked in $89.7 million in total compensation. (Hannah Yoon/Bloomberg via Getty Images)

Hugh Mackenzie, a research associate at the think-tank, says it’s not known whether the slight dip in 2014 is a sign of any sort of lasting change.

“It’s not clear from the data at this point, because we’ve only seen one year, whether this is indicative of a slight downward trend or whether this is just a blip,” said Mackenzie.

“My gut instinct tells me that it’s a blip,” he says, adding that a change in how stock options are being valued, given the slide in commodity prices that began in 2014, may be responsible for the slight decline.

The highest paid CEO, according to the study, was Blackberry’s John Chen, who took home $89.7 million in total compensation.

Donald Walker of Magna International Inc. was the next highest paid, pocketing $23.4 million. Gerald Schwartz of the private equity company Onex Corp., who was the top paid CEO the previous year, earned total compensation of $21.1 million.

Peter Blake, the former CEO of Ritchie Bros Auctioneers, was the lowest paid CEO on the list, earning $4.3 million in total compensation.

Only two women made the list — Linda Hasenfratz of Linamar Corp., who was compensated a total of $10.1 million, and Dawn Farrell of TransAlta Corp., who earned $4.5 million.