They would all be right on home on any trendy restaurant menu in Vancouver, but these dishes were part of a unique gourmet meal created from produce destined for the trash.

Kasujiru, a hearty Japanese winter soup, was made from root vegetables deemed too imperfect to sell in supermarkets.

Squash that would have spoiled in farmers’ fields was hollowed out for a rice porridge with toasted seeds, scallion ends, sage leaves and stem oil. 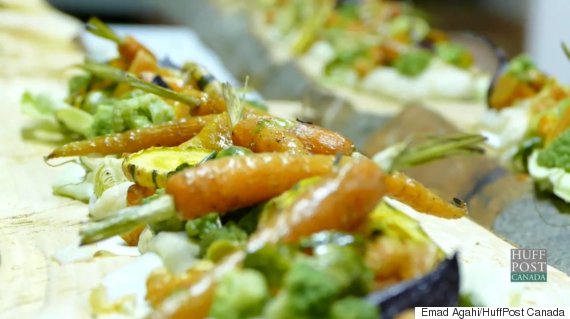 “There’s a lot of misconception about rescued food is or what food waste is,” organizer Elaine Cheng told The Huffington Post B.C. “We’re not serving anything that’s rotten or questionable at all.”

The Replated event in November turned more than 500 pounds of vegetables into a six-course, vegetarian meal for more than 60 guests — all to get people thinking about how they can help curb food waste.

“It just doesn’t make sense to me that’s there’s such an abundance of food and yet so many people are hungry,” said Cheng.

Volunteers picked some of the other ingredients like Brussels sprouts and cauliflower from fields where farmers didn’t have enough manpower to harvest it.

“There were field and fields of brussels sprouts,” said chef Celia Lam. “Acres and acres of perfectly good food… and [farmers] just couldn’t get to it in time. That food will just lie on the ground and rot.” 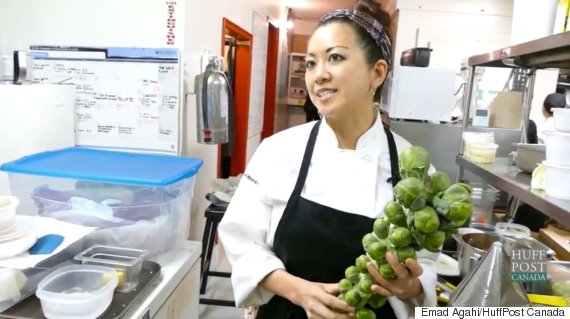 Annually, Canadians spend about $31 billion on food that ends up in the garbage, according to a 2014 study.

About 40 per cent of food grown in the country is never eaten.

“Maybe that zucchini has a few bumps, or maybe that cabbage is too small or too big … grocery stores won’t sell it,” explained Lam.

In March, grocery stores in France were banned from throwing away unsold, edible food. Instead, shops have to donate the food to charity, or risk hefty fines and up to two years in jail.

Produce that isn’t safe to eat has to be given to farms to feed animals, or put in the compost.

In Canada, Real Canadian Superstores and and No Frills stores started selling “Naturally Imperfect” produce at cheaper prices to help with the food waste problem.

The Replated organizers are the same people behind the Feeding the 5,000 event in Vancouver this spring, which handed out thousands of free lunches made entirely with imperfect food donated by supermarkets.

She said the success of that endeavour inspired her to create fancier gourmet meals, with hopes of convincing more restaurants to incorporate imperfect produce in their menus.

“I would love to change people’s relationship to food,” Cheng said.

Proceeds from Replated’s ticket sales benefitted Farm 2 Food Bank, a program that recruits volunteers to pick surplus produce from farms around B.C.’s Fraser Valley so it can be donated to those in need.