How A Canada-U.S. Trade Feud Built Hundreds Of Homes In Places Like New Orleans

'Star Wars: The Force Awakens' Hits $1 Billion At The Box Office Faster Than Any Other Movie

NEW ORLEANS — One little-known legacy of the now-expiring softwood lumber agreement: it spawned a massive, Canadian-funded humanitarian effort in the United States that people north of the border have never heard of.

Funds dispersed with little fanfare under the decade-old Canada-U.S. deal built hundreds of houses in places like this once-underwater neighbourhood in New Orleans, affecting lives like Sheldonna Durosseau’s.

Durosseau gets teary-eyed describing the impact of home ownership on her and her daughter, on the one-year anniversary of their move into a neighbourhood filled with post-Hurricane Katrina construction projects.

“Now I have a sidewalk where my daughter can actually go ride her bicycle. Skate. Do hopscotch. Kid things,” said the 34-year-old mom and university custodian.

“I have security. I am at ease, now that I have something to call my own.”

“It had a tremendous impact here.”

Stories like Durosseau’s abound in disaster-affected areas of the U.S.: the New Orleans flood of 2005, the eastern seaboard after Hurricane Sandy in 2012, parts of Colorado flooded in 2013, a tornado-striken area of Missouri in 2011.

That’s because the 2006 Canada-U.S. agreement did more than bring a decade of peace to a perennially problematic trade file. One of its provisions was a guarantee that $500 million of the penalties previously levied on the Canadian lumber industry wouldn’t remain in the American treasury, or go to American businesses.

It went to American charities. One was Habitat for Humanity.

The organization has built 19,000 houses since that time in hundreds of places, benefiting 70,000 people in the U.S. — and it estimates the softwood funds built five per cent of them.

“The softwood-lumber program has been enormously helpful,” said Fiona Eastwood, a national director at Habitat for Humanity.

“It’s had a tremendous impact here.”

“It changed my life. God… he was in the blessing business.”

In 2006, Canada and the U.S. signed a nine-year agreement that set aside lawsuits and punitive tariffs against imported wood from Canada. It brought temporary peace in a recurring spat over whether Canadian lumber businesses get an unfair subsidy through cheap access to public land.

The deal included plans for spending more than $5 billion the U.S. had collected in penalties over the years on Canadian companies. Most was refunded. The U.S. got to keep $1 billion. Half that sum went to U.S. companies — something the Canadian Centre for Policy Alternatives grumbled would subsidize future lawsuits and was akin to handing money to the schoolyard bully.

The other half went to charities.

Habitat for Humanity was among the biggest recipients, pulling in $100 million. With the deal expiring this year, the money’s almost all been spent, with just $4 million left in a fund for specific disaster areas.

One is New Orleans. 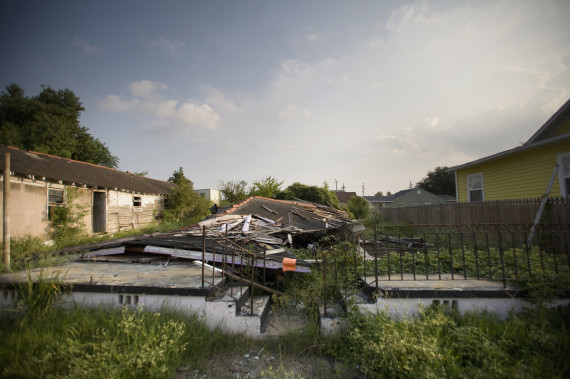 A flattened house. Remnant of the devastation from Hurricane Katrina. (Photo: Gettystock)

Durosseau was four months pregnant when Katrina hit. To protect herself and her baby, she fled to stay with her sister and wound up spending three years in North Carolina.

By the time she returned, rent prices had skyrocketed. Much of New Orleans’ housing had been devastated. She wound up working two jobs, having already quit college over mounting student debt.

She got fed up with renting. The last straw wasn’t the mold, from the floods. It was the sound of rats scratching at the walls of the complex, where she and her daughter shared a one-bedroom apartment that cost $619 a month.

She now pays less — for the mortgage on a three-bedroom home she calls her own.

“It changed my life,” she said of home-ownership. “God… he was in the blessing business.”

“The softwood-lumber program has been enormously helpful.”

Her sister told her about Habitat. Durosseau underwent financial-background checks. She volunteered 350 hours, helping build other homes in her future neighbourhood. Her specialty became flooring and painting.

When she qualified, Habitat helped her file the mortgage paperwork. Her one-year anniversary as a home owner was Dec. 22. Her daughter has just had a first birthday sleepover here, and helium balloons are floating around.

There’s still a housing shortage in New Orleans — 185,000 units were lost or damaged in the flood. Habitat built about 500, and estimates about one-fifth here were built with softwood money.

“I’m not at all optimistic that there will be a new softwood-lumber agreement negotiated.”

One trade expert isn’t counting on another deal soon.

“I’m not at all optimistic that there will be a new softwood-lumber agreement negotiated,” said Laura Dawson, head of the Washington-based Wilson Center’s Canada Institute.

“There’s a sort of impasse.”

Softwood isn’t included in NAFTA. And there’s a fundamental disagreement, she said, between the U.S. and Canada about timber from Crown lands.

Dawson said the best advice she could offer Canadian industry is two-fold: build on its expanding Asian markets, and produce more value-added products.