Online Streaming In Canada Had 'A Watershed Year' In 2015, Analyst Says

TORONTO — Whenever Anushie Mahavitane gets a chance to watch TV, the busy working mom has a choice to make: Will it be live, on-demand or streamed?

It depends on several factors, not the least of which is her five-year-old son’s nightly routine — a consistent schedule involving after school activities, dinner and a bedtime ritual.

“By the time all of that is done it’s usually 8:30, 9 o’clock and usually around that time I will have missed my shows,” says the 35-year-old Toronto resident.

“This was the year when streaming really went mainstream.”

“So that’s when I will actually use Rogers On Demand. That is one of the main reasons I still subscribe to Rogers cable, is because of the on-demand function.”

She does still catch some of her favourite shows as they air, but she admits she’s increasingly turning to streaming and on-demand sources that offer convenience and flexibility.

And she’s not alone.

Industry analyst Carmi Levy calls 2015 “a watershed year for streaming in Canada” and predicts even more viewers will shift online in 2016.

“This was the year when streaming really went mainstream,” Levy says from London, Ont.

“CraveTV came into its own as did Shomi, and Netflix of course continued to be the juggernaut that it is. This is the year when streaming went from being the domain of the early adopter to something that was largely the option of pretty much everyone else —and 2016 will simply consolidate those gains…. It is firmly entrenched in the Canadian cultural, technological landscape.”

As such, the big broadcasters have been working to meet demand as best they can.

Bell Media is stacking CraveTV with premium content from Showtime, including the new Damian Lewis and Paul Giamatti series “Billions,” debuting Jan. 17 — the same day it airs on The Movie Network and in the U.S.

CraveTV will also be offered to all Internet-connected Canadians in the new year.

“Our hope and our belief is that ‘Billions’ on Crave serves as a barker for the high quality premium drama available,” says Tracey Pearce, senior vice-president of specialty and pay.

In February, CraveTV will also release its first-ever original series, “Letterkenny.” It’s a six-part comedy based on the YouTube series “Letterkenny Problems,” from “19-2” star Jared Keeso. 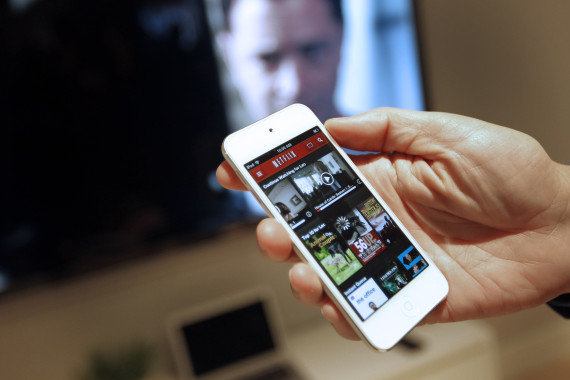 The streaming phenomenon does seem to be changing the kind of shows that get made. (Tony Avelar/Bloomberg via Getty Images)

Not to be outdone, Shomi — backed by Rogers Communications (TSX:RCI.B)and Shaw Communications  (TSX:SJR.B) — is touting the addition of Patrick Stewart’s comedy “Blunt Talk” on Dec. 30. Stewart nabbed a Golden Globe nomination for his portrayal of Walter Blunt, a badly behaving British journalist living in Los Angeles. That’s in addition to a new season of “Transparent” that launched earlier this month.

“We’re watching VOD platforms become more and more successful … so we’re finding ways to monetize the audience,” says Williams, adding that they are also investing in short-form content for websites, Facebook, Snapchat and other platforms.

“All of those things keep people in the system and keep them in television and keep supporting our channels, if you will. Although we may define ‘what is a channel’ more broadly than we ever did before.”

The streaming phenomenon does seem to be changing the kind of shows that get made, as several newcomers prove they can compete with the old guard.

Netflix leads all other TV networks in Golden Globe nominations with eight, for shows including “Orange is the New Black,” “Narcos” and “Master of None.” And the best musical or comedy series category is dominated by streaming shows, including Hulu’s “Casual,” Netflix’s “Orange Is The New Black,” and Amazon’s “Transparent” and “Mozart in the Jungle.”

“It sort of (has become) what independent film was 10 years ago when everybody wanted to go do the really juicy parts,” says Ritter, who also writes and develops TV projects through her company Silent Machine Entertainment.

Contrast that with network shows that generally chase bigger audiences to draw in advertisers, and are bogged down by a host of other factors like show lead-ins and whether they jive with the broader lineup, she adds.

“And that’s really frustrating. I’ve done two pilots that were amazing (but) were held onto because they wanted to wait for the right time slot to open up,” says Ritter.

“This is the year when streaming went from being the domain of the early adopter to something that was largely the option of pretty much everyone else.”

Rogers Media executive Hayden Mindell dismisses any notions of ideological divide between streaming and conventional shows, noting “everything is a streaming show now, in some form.”

On Shomi, slick cable fare and sophisticated streaming properties mix with current seasons of the CW’s “Jane the Virgin” and ABC’s “Fresh of the Boat” — two network shows in the United States that might have been comfortable on City or Global.

“There’s an understanding maybe that streaming services have to serve a particular niche but we’re seeing more and more — whether it’s Netflix, Hulu or Shomi — that there’s really a broad base of consumption habits … and they’re not just all high-end dramas or conceptual comedies,” says Mindell, VP of TV programming and content.

Those looking for mobile options when catching up on their current faves must turn to broadcaster apps such as CTV Go, Global Go and City Video, but they each have their hiccups, says Levy, who hoped for improvements in 2016.

Gary Pelletier, president of the Canadian chapter of the Cable & Telecommunications Association for Marketing, says his group is working with all the big players to make so-called “TV everywhere” apps easier to use.

“The pain points are recognized,” says Pelletier, whose association provides information and education to cable companies and content providers.