Canadian Stock Market Down In 2015, Struggle Expected To Continue In 2016

OTTAWA — The Toronto Stock Exchange was pounded this year as the price of oil and other commodities took a beating.

Down more than 10 per cent heading into the final trading week of the year, even the Canadian banking sector — a stalwart of many portfolios — has struggled.

And 2016 is expected to continue to be challenging for Canadian stocks.

Sadiq S. Adatia, chief investment officer at Sun Life Global Investments, says 2015 started out bullish, but unwound in second half of the year with a bigger hit on oil prices and weakness in China.

“It was a tale of two halves,” Adatia said.

“As we close off the year, people are going to be looking at how the Canadian fares with even lower prices than people were expecting in 2015.”

The energy sector grabbed the headlines in 2015 as the price of oil went into freefall, taking stocks and the loonie with it. But the drop in the Canadian dollar wasn’t all bad news.

“As we close off the year, people are going to be looking at how the Canadian fares with even lower prices than people were expecting in 2015.”

Canadian investors with U.S. stocks benefited enormously from the drop in the loonie. In U.S. dollar terms, gains by American stocks this year were modest, but because of the plunge in the loonie, the gains in Canadian dollar terms were impressive.

Headed into 2016, Adatia is still bearish on the Canadian market, but he suggested the banking and telecommunication sectors are areas where investors might want to ride out the volatile markets.

“You still want to have some of the staple names out there,” he said.

“If the economy gets weaker and consumers tighten their spending, what they are going to spend on is what they actually need.”

CIBC is forecasting the S&P/TSX composite index to gain five per cent in 2016 and the S&P500 in the U.S. to climb about three per cent in Canadian dollar terms. 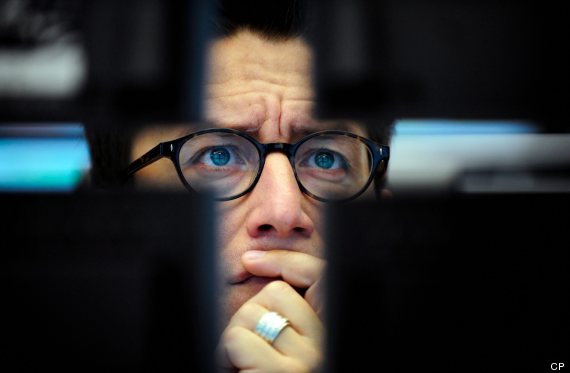 “If you look at France, Germany, Italy — these markets have done eight, 10, 12 per cent returns in local currency, plus the Canadian dollar depreciated more than the euro,” he said.

However, he doesn’t expect much from the U.S. market this year.

“We are probably going to have low single-digit expected returns for the S&P500 for the next 12 months,” he said.

De la Durantaye also suggested that it’s unlikely oil is going to drop another 50 per cent.

“You’re starting to put some elements in place for things to change,” he said.

With oil prices around US$35 a barrel, higher-cost producers are going to be forced to cut production. Investments in the oil patch have slowed and the costs for energy companies to borrow have climbed.

“You’re starting to put some elements in place for things to change.”

“If you go to a bank or the market to get some funding to do a project in oil, it is going to cost you a lot more today than a year ago,” de la Durantaye said.

HSBC suggested that higher OPEC supplies, a stronger U.S. dollar and record levels of inventories were the biggest downside risks for the price of oil. However, the big bank also pointed to healthy demand growth and cuts to shale oil production as helping prices.

HSBC suggested oil prices will stay between US$40 and US$60 a barrel with volatility likely driven by shifts in investor sentiment as well as geopolitical developments in the Middle East.

“If you go to a bank or the market to get some funding to do a project in oil, it is going to cost you a lot more today than a year ago.”

Adatia suggested long-term investors looking for opportunities in Canada may also want to start sniffing around the energy sector looking for bargains.

He recommends looking for companies with strong balance sheets and management, because they’re the ones best-positioned to ride out the drop in oil prices.

“It is going to be a rough ride for the next few months,” he said.