TORONTO — Islamic banking is being touted as the next big thing for Canada’s financial services sector, but experts say it’s up to the new federal government to demonstrate that it welcomes Shariah-compliant investments.

“It’s absolutely fundamental that the Canadian government signal that, in fact, it is open to Islamic finance,” says Walid Hejazi, an associate professor at the University of Toronto’s Rotman School of Management.

They could do so either by issuing sukuk — Islamic bonds — or by making a public statement, Hejazi says, noting that the previous government was on record as saying it welcomed such investments.

“If there is a risk that a change in government is going to change its view on that kind of investment, that spooks investors,” he said. “So the government must be clear to say . . . ‘We’re open to Islamic finance, we welcome it,'”

“We need to have people across the country that understand Islamic finance, which we don’t have.”

Islamic finance — which bans interest payments and investments in gambling, pornography, weapons, alcohol, tobacco and pork — is a fast-growing niche in the financial services industry.

A study released earlier this month by the Toronto Financial Services Alliance and Thomson Reuters says Canada has a number of advantages — including a growing Muslim population, a stable banking system and a favourable regulatory environment — that make it well positioned to become a North American hub for Islamic banking.

“Islamic finance is one of the fastest growing kinds of finance in the world,” said Janet Ecker, president and CEO of the TFSA.

“There are opportunities here which should be explored. Toronto is an international financial centre. … This is another way to keep our reputation and our capabilities growing.”

Hejazi says the Islamic ban on interest doesn’t mean consumers borrow money for free — it just requires loans to be structured more like partnerships between financial institutions and borrowers.

“The whole idea or the concept is to avoid people becoming buried in debt because, back in the days of the Prophet, … when people weren’t able to pay their debt they were enslaved or exploited,” he said. 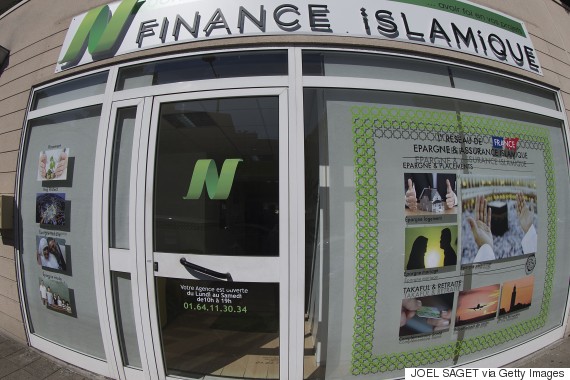 A photo taken on Sept. 10, 2015 in Chelles, near Paris, shows an agency of the first Noorassur Islamic bank in France. (Joel Saget/AFP/Getty Images)

In the case of commercial loans, that means both the bank and the borrower must have a vested interest in the success of the underlying business.

The report commissioned by TFSA says there are a number of opportunities for Islamic banking to expand in Canada. Some Muslim Canadians desire Shariah-compliant solutions to their personal finance needs, including mortgages, insurance and investment opportunities.

The Canadian government could also issue sukuk, or Islamic bonds, which are structured in such a way that they generate returns without the use of interest payments, to help fund its planned infrastructure spending, according to the report.

“The new federal government has an opportunity to demonstrate Canada’s openness to foreign investment from markets in the Middle East and Southeast Asia by encouraging investments either in a conventional or an Islamic-compliant manner,” said Jeffrey Graham, partner and the head of the financial services regulatory group at Borden Ladner Gervais LLP.

“Other governments who have been seeking to do the same thing have issued sovereign sukuks, or Islamic bonds, to help promote their financial sectors.”

“So the government must be clear to say . . . ‘We’re open to Islamic finance, we welcome it.'”

However, a spokesman for the Department of Finance appeared to throw cold water that idea, saying in an email that “there continues to be very strong demand for regular ‘plain vanilla’ Government of Canada securities.”

Meanwhile, one of the obstacles to the growth of Islamic finance in Canada is the lack of what Hejazi calls “human capital.”

“We need to have people across the country that understand Islamic finance, which we don’t have,” said Hejazi, who teaches a course on Islamic finance, now in its fifth year, at Rotman. Last year the course was full, with 40 students on the waiting list.

“I get so many emails from people downtown, from the banks, the accounting firms, consulting firms, saying ‘Could I sit in on your class?'” says Hejazi. “There’s a lot of interest. People really want to learn more.”