Site C Dam Contract Set At $1.75 Billion By BC Hydro

Federal Finance Minister Bill Morneau released fresh figures Sunday outlining how much the neediest provinces can expect to receive from Ottawa in the next fiscal year. 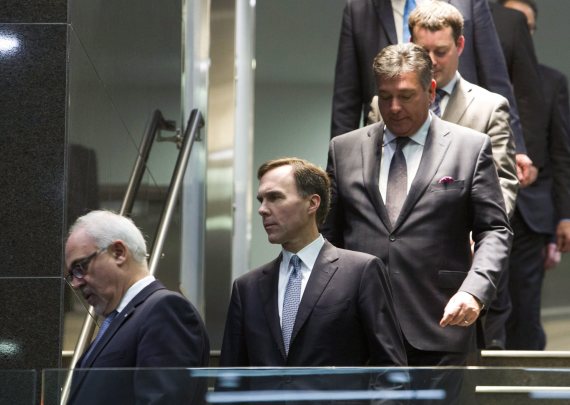 Finance Ministers conclude a meeting and make their way to a joint news conference in Ottawa Dec. 21, 2015. (Fred Chartrand/CP)

Under the formula, the same six so-called “have-not” provinces that received cash in 2015-16 — Quebec, Ontario, Manitoba, Nova Scotia, New Brunswick and Prince Edward Island — will get the payments again next year.

That means economies hit hard by the sudden drop in oil prices — such as Alberta and Saskatchewan — will continue to pay into the program as “have” provinces.

“Based on that formula, there is a lag effect.”

“Well, the formula is the formula and we’re a have province,” Saskatchewan Finance Minister Kevin Doherty told the news conference following the talks.

“Based on that formula, there is a lag effect.”

It’s been a difficult year for the province’s bottom line. The oil-price shock has erased about $500 million in revenues from Saskatchewan’s $14-billion budget, he said.

Alberta has received a bigger wallop.

Doherty said Monday he’s more focused on how quickly the federal government will start spending the billions of dollars in infrastructure investments it pledged during the election campaign.

The federal Liberals see infrastructure funding as a key to boosting the country’s economy, something echoed by several provincial finance ministers.

“…we don’t have all of the details ironed out about how exactly we can deliver on our spending promises.”

Morneau was asked Monday when he expected to start seeing the shovels drive into the ground.

“We acknowledged that at this early stage that we don’t have all of the details ironed out about how exactly we can deliver on our spending promises,” said Morneau, who added the ministers spent a lot of time discussing infrastructure at the meetings.

Morneau said he hoped to sort out the specifics in the coming months. He noted it’s important to do it rapidly but responsibly to get the economic impact they’re aiming for.

On Sunday night, Morneau appeared to want to steer clear of the sometimes thorny issue of equalization.

“I expect that at every meeting of the finance ministers that is a subject that people will discuss,” Morneau said when asked if he thought its formula was fair.

The constitutionally guaranteed equalization program will redistribute nearly $18 billion in 2016-17 to poorer provinces, where the cash will help fund public services.

In 2016-17, Quebec will once again be — by far — the biggest recipient of equalization payments. It will get about $10 billion from the nearly $18-billion program. 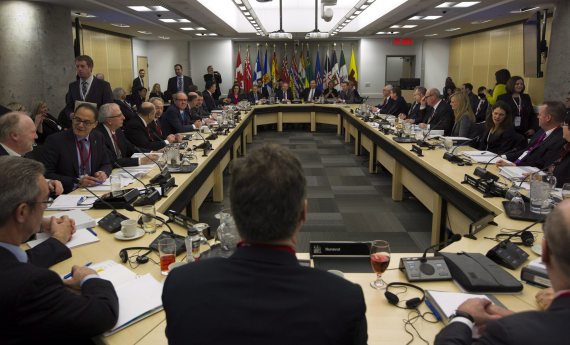 Finance Minister Bill Morneau starts a meeting with his provincial and territorial counterparts, in Ottawa, on Monday, Dec. 21, 2015. (Fred Chartrand/CP)

Quebec Finance Minister Carlos Leitao was asked Sunday night about the formula’s fairness. He replied by saying the federal coffers take in cash from all provinces — including about 23 per cent that comes from Quebec.

“So, a portion of it gets transferred back (to Quebec) and more,” he said.

Historically, provinces have had their differences about equalization.

Saskatchewan Premier Brad Wall has expressed frustration with the formula, arguing it doesn’t easily take into account the changes in resource prices, such as oil and hydro, making it years behind the times.

Wall has also said provinces like Manitoba and Quebec receive bigger payments because the formula doesn’t account for the revenues they rake in from hydro power. The calculation does, however, factor in non-renewable resource revenue from oil and gas.

He has called for the payments to be halved to allow Ottawa to instead invest the money in things like infrastructure projects across the country.
Source: HP