OTTAWA — As 2015 began, Stephen Poloz commanded a central bank amid an economy finally showing signs of broad recovery — to the point many predicted he would, before long, boost the long-frozen benchmark interest rate.

That’s when Poloz dropped a bombshell on the cautious economic optimism.

He cut the bank’s trend-setting rate, blindsiding financial markets. Poloz defended the stunner as a shield to blunt the “unambiguously negative” effects of the price slide on the oil-exporting country. 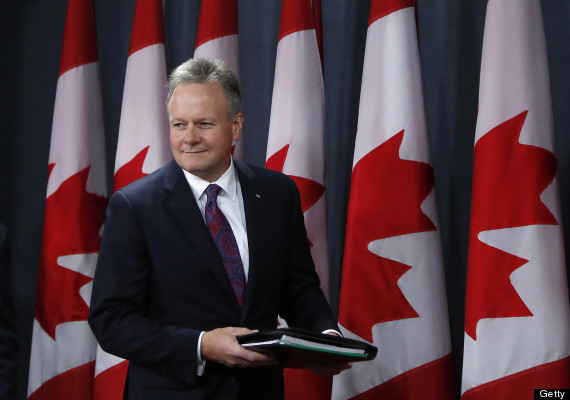 The governor has been voted Canada’s 2015 Business Newsmaker of the Year in the annual poll of the country’s newsrooms by The Canadian Press.

Poloz was the choice of senior business journalists because of his work throughout a turbulent year. He spent 2015 analyzing an economy walloped by low crude prices, pushed into technical recession and, eventually, subjected to another drop in the overnight rate.

“It’s not often, if ever, that a central banker catches the market completely off guard with interest-rate policy, but that’s precisely what Stephen Poloz did,” wrote Business News Network anchor Greg Bonnell in explaining his vote for Poloz.

“While many questioned why the governor felt it necessary to take out that ‘insurance,’ two back-to-back quarters of negative growth for the Canadian economy made his January move look very prescient.”

“In a nutshell, it was a challenging year, of course, because we started off with a shock of great size.”

Even Poloz himself admits he was surprised by the developments 12 months ago.

“In a nutshell, it was a challenging year, of course, because we started off with a shock of great size,” Poloz said earlier this month when asked about the past year.

“And not only was it a big shock … it is the most complex type of shock that an economist can face.”

He recalled that last December, the bank was only just starting to see the oil-price plunge for what it was. Just a couple of months before that, “there was almost no sign of it,” Poloz added.

“It was just a little soft, but it looked like it would be temporary,” he said of conditions in the fall 2014, when crude prices started their free fall.

Up until January, the central bank had been expecting Canadian growth to accelerate along with the anticipated momentum in the U.S. economy, he said.

When the U.S. pick-up failed to materialize, Canada’s early 2015 picture dimmed to the point that it prompted Poloz to utter an eyebrow-raising adjective that seized headlines and would hound him for months.

“His decisions to cut rates twice this year, propping up the housing market but sending consumer debt to new heights, are at the heart of the questions so many Canadians are asking.”

Poloz told the Financial Times in a March interview that the oil slump would make Canada’s first-quarter data look “atrocious.” He was later forced to explain his use of the remark to a parliamentary committee, where he said it was “certainly not our intent to surprise or to frighten people.”

But the early 2015 numbers were indeed dreadful.

The economy shrunk over the first and second quarters of the year. By definition, two straight quarters of contraction is a technical recession.

Poloz responded to the ugly situation — mostly blamed on the oil-shock fallout and the grim global economy — by chopping the key rate a second time to the 0.5-per-cent mark where it stands today.

“No other business figure has both captured headlines and had a greater impact on Canada’s economy like Poloz has — for better, or for worse,” wrote Maclean’s business editor Jason Kirby.

“Only time will tell if Poloz’s policies helped Canada through hard times, or pushed the country right into a deleveraging shock.”

In selecting Poloz, Daniel Tencer from the Huffington Post Canada said Poloz’s decisions this year will have more impact on a larger number of Canadians than any other business leaders.

“His decisions to cut rates twice this year, propping up the housing market but sending consumer debt to new heights, are at the heart of the questions so many Canadians are asking: ‘Have we taken on too much debt? Is the housing market about to come down?'” Tencer wrote.

“Only time will tell if Poloz’s policies helped Canada through hard times, or pushed the country right into a deleveraging shock.”

While Poloz acknowledges Canada’s vulnerability has edged up along with the country’s mounting household debt, he still believes it’s unlikely the boost in borrowing will have major, negative repercussions.

Poloz, who took over the governor’s office from Mark Carney in June 2013, has also said he’s satisfied with the rate cuts. He noted they are still working their way through the system.

“I’m very happy with the way our own staff managed to stick-handle through that to figure out what would happen,” Poloz said of the bank’s evaluation and response to the oil slump. “But in the end, it still leaves us with another year, if you like, in the serial disappointment series … It’s definitely delayed that progress that we’d been watching for.”

Looking ahead, he still predicts that Canada remains on track for that elusive economic turnaround.

“We do think that the positives will be dominant in 2016.”