John Chen, BlackBerry CEO: It's A 'Social Responsibility' To Hand Over Private Info In Some Cases

Canada Rental Rates: Where You Get The Most Bang For Your Monthly Buck, In 1 Infographic

WATERLOO, Ont. — BlackBerry’s chief executive John Chen says he stands by a controversial blog post he published earlier this week that outlines when he’d be willing to hand private customer information over to law enforcement.

The CEO of the Waterloo, Ont.-based company was taken to task by technology websites and commentators over what some deemed as hypocrisy coming from the leader of a brand that pledges security and privacy.

Without pointing Apple out by name on Tuesday, Chen slammed a recent update to Apple’s operating system which makes it impossible for the company to unlock the devices, even if there’s a search warrant for a criminal investigation.

Talking with reporters on Friday, after BlackBerry released its latest financial results, Chen said he wasn’t fazed by the backlash.

“The data itself is safe because we never have it,” he said. “We never save the content.”

“I strongly believe that if there are bad elements out there trying to harm society, for one reason or another… it’s our social responsibility to help,” he said.

He also offered some more insight into his post — highlighting a “longstanding policy” established at BlackBerry before his arrival two years ago, which outlines when the company would be willing to give access to police under a court order.

“We are going to be able to provide your location, who’s called who, and all of the metadata around that,” he said in a roundtable with reporters.

But he emphasized that BlackBerry wouldn’t give authorities a user’s specific texts or other communication.

“The data itself is safe because we never have it,” he said. “We never save the content.”

Data and device encryption has become an hot topic for hardware and software companies in recent years as they weigh the privacy rights of citizens against the possibility their technology is being used by terrorists and criminals to communicate.

Last month, BlackBerry Ltd. (TSX:BB) said it would uphold a promise to shutter its operations in Pakistan rather than accept an overarching demand by the government to give it “unfettered” access to the BlackBerry servers. 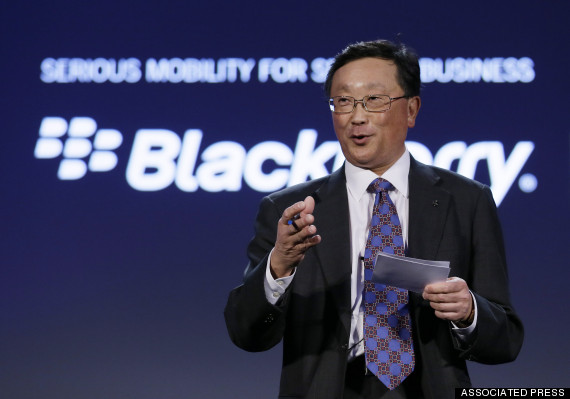 BlackBerry has set a deadline of Dec. 30 to make the decision. A spokeswoman for the company did not respond to requests for an update on the process.

On Friday, BlackBerry reported its latest quarterly results which showed it was getting a boost from its software division as phone sales slipped again.

After adjustments, BlackBerry lost US$15 million or three cents per share, far less than the loss of 14 cents per share expected by analysts, according to Thomson Reuters.

Revenue slightly improved to US$557 million, helped by the results of a software company it recently acquired.