Vancouver's Trump Tower Should Be Called Something Else, Says Mayor

Bridging The Boomer-Millennial Gap And Overcoming The Succession Challenge

Are You Ready For An MBA? Credential Seekers Need Not Apply

Vancouver Mayor Gregor Robertson has sent a letter urging a developer to drop Donald Trump’s name from a tower being built downtown.

Robertson says in the letter to the Holborn Group that Vancouver is known for diversity, equality and freedom from discrimination, and Trump’s hateful positions undermine those ideals.

He references a petition signed by more than 50,000 people asking that the U.S. businessman’s name to be removed from the tower, following the Republican hopeful’s call to ban Muslims from entering the United States.

Robertson says he’s asked the city manager to see if the council has any power to change the name if the developer doesn’t take action, though he noted the city lacked any “obvious tools.” 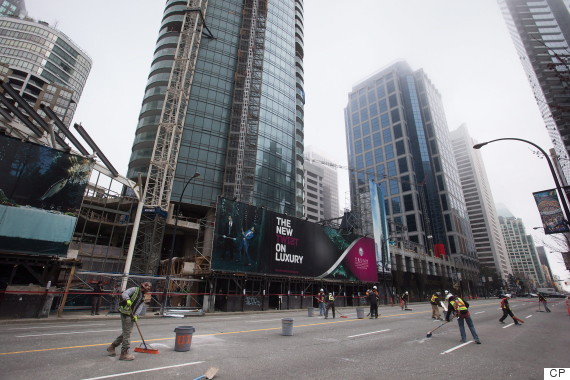 Workers sweep up broken glass after a pane of glass fell from the Trump International Hotel & Tower under construction in Vancouver on March 10, 2015.

The Holborn Group is building the 63-storey Trump International Hotel and Tower, but the company did not immediately respond to a request for comment.

British Columbia Premier Christy Clark says she agrees that Trump’s name doesn’t represent Vancouver, but that ultimately the city and the developer should make the decision.

Mr. Tiah, I am writing to you regarding my concern, and the outcry of concern from Vancouver citizens, about the Trump brand on your new tower on West Georgia Street.

As Mayor, I’m proud that Vancouver is known throughout the world for our steadfast commitment to diversity, equality, and freedom from discrimination and hatred. Vancouver is enriched by that diversity, and being a city where people can live and thrive regardless of their gender, sexuality, faith, or ethnicity.

That kind of openness represents the very best of today’s Canada, and is a key reason why Vancouver is such a desirable place to live.

In contrast, Donald Trump’s hateful positions and commentary remind us all of much darker times in our world’s past –
and it is incumbent upon all of us to forcefully challenge hatred in all of the ways that it confronts us.

Over 50,000 people have now signed a petition asking that the Trump name be removed from Holborn’s signature new tower on West Georgia Street in Downtown Vancouver, in conjunction with the same call from Vancouver City Councillor Kerry Jang.

It is their belief, and my belief, that Trump’s name and brand have no more place on Vancouver’s skyline than his ignorant ideas have in the modern world. As Mayor, it is my hope that you and your company will work quickly to remove his brand and all it represents from your building. I would like to thank you for your consideration and reply.