Kupfert And Kim Offers An Accessible Take On Vegan Fare

The Force will be with many fans as the latest “Star Wars” movie begins screening Thursday night — but masks and toys from the sci-fi franchise won’t be.

Cineplex Entertainment has told fans that, while anyone can show up in costume, they can’t bring toys, props or masks, as they could “become tripping hazards or impair vision in a theatre.”

That means anyone wishing to dress up as Yoda or Chewbacca will have to do it without masks. No lightsabers, either.

The warning comes as “Star Wars: The Force Awakens” has its first screenings late Thursday night before opening into wide release on Friday. 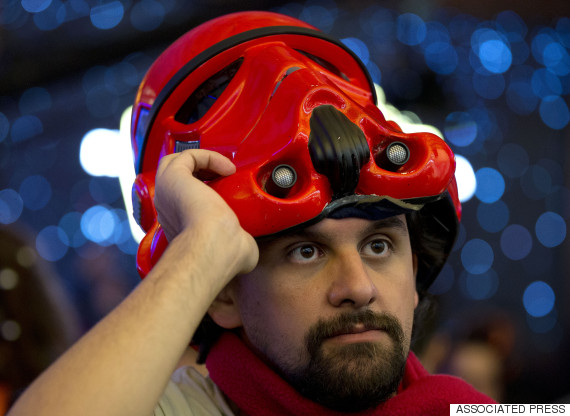 Fans will have to do precisely this with “Star Wars” masks if they wish to view “The Force Awakens” in a Cineplex venue. (Photo: Rebecca Blackwell/AP)

The film has already made $100 million, which includes up to $60 million in advance ticket sales, said The Hollywood Reporter.

Demand has been so high that Cineplex and other movie theatre companies have added extra screenings.

Anyone who wishes to avoid spoilers can install blockers on Google Chrome, IGN reported.

Or they can cover their eyes and ears until they see the film.