UPDATE 12/172-15: LAS VEGAS — The family of billionaire casino mogul Sheldon Adelson confirmed in a statement to the Las Vegas Review-Journal that they’re the new owners of Nevada’s largest newspaper.

The statement printed on page 2 of Thursday’s edition comes a week after the paper was sold for a second time this year at a markup.

The owners had remained a mystery until now, with the newspaper’s staff and politicians having demanded to know the identity of the new boss.

The Adelsons say they had intended to announce their ownership but held back because Tuesday’s Republican presidential debate was taking place at the Venetian, the casino-hotel on the Las Vegas Strip that’s part of Adelson’s empire.

Adelson, a major GOP donor, said at the debate that he had “no personal interest” in ownership.

LAS VEGAS — The ownership mystery surrounding the sale of the Las Vegas Review-Journal has captured the attention of the media industry as the newspaper’s staff and some politicians demand to know the identity of the new boss.

The timing of the deal and the purchase price have Twitter buzzing and rumours flying that a wealthy GOP donor bought the largest newspaper in a swing state to influence the presidential election. Even a White House hopeful has weighed in on the matter.

The recently incorporated News + Media Capital Group LLC announced last week that it bought the Las Vegas Review-Journal and some affiliated publications for $140 million. That’s a markup of about 37 per cent from the paper’s last sale earlier this year, when the similarly named New Media Investment Group bought it. 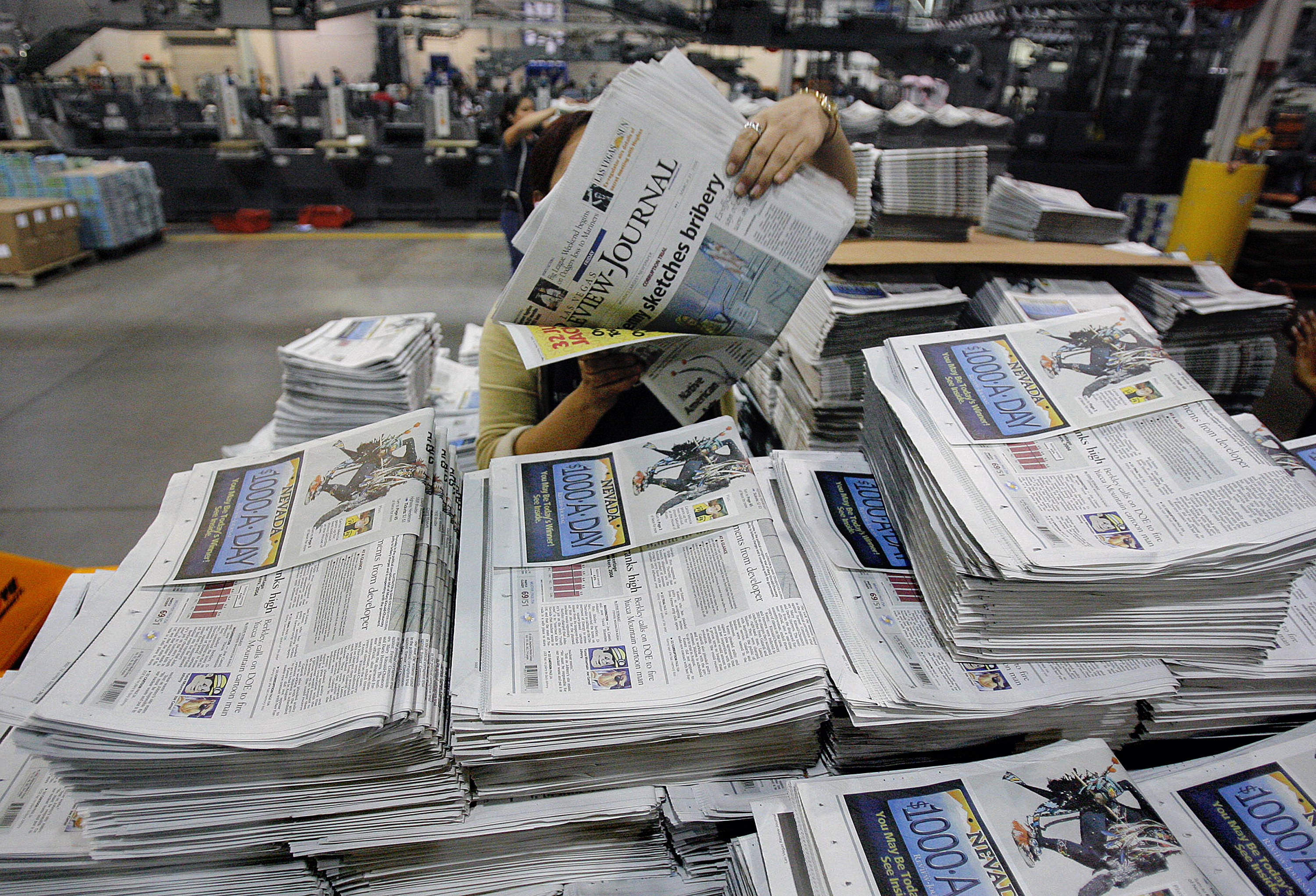 The report said that Patrick Dumont, who is listed on the website of Las Vegas Sands Corp. as the company’s senior vice-president of finance and strategy, put together the deal at the behest of his father-in-law, the chairman and CEO of the casino operator.

It said that the 41-year-old Dumont, a New York attorney, in 2009 married Sivan Ochshorn, a daughter of Adelson’s wife, Dr. Miriam Adelson, from a prior marriage. Sivan Ochshorn Dumont is listed as owner/agent of Israel Hayom, which is owned by the casino mogul. 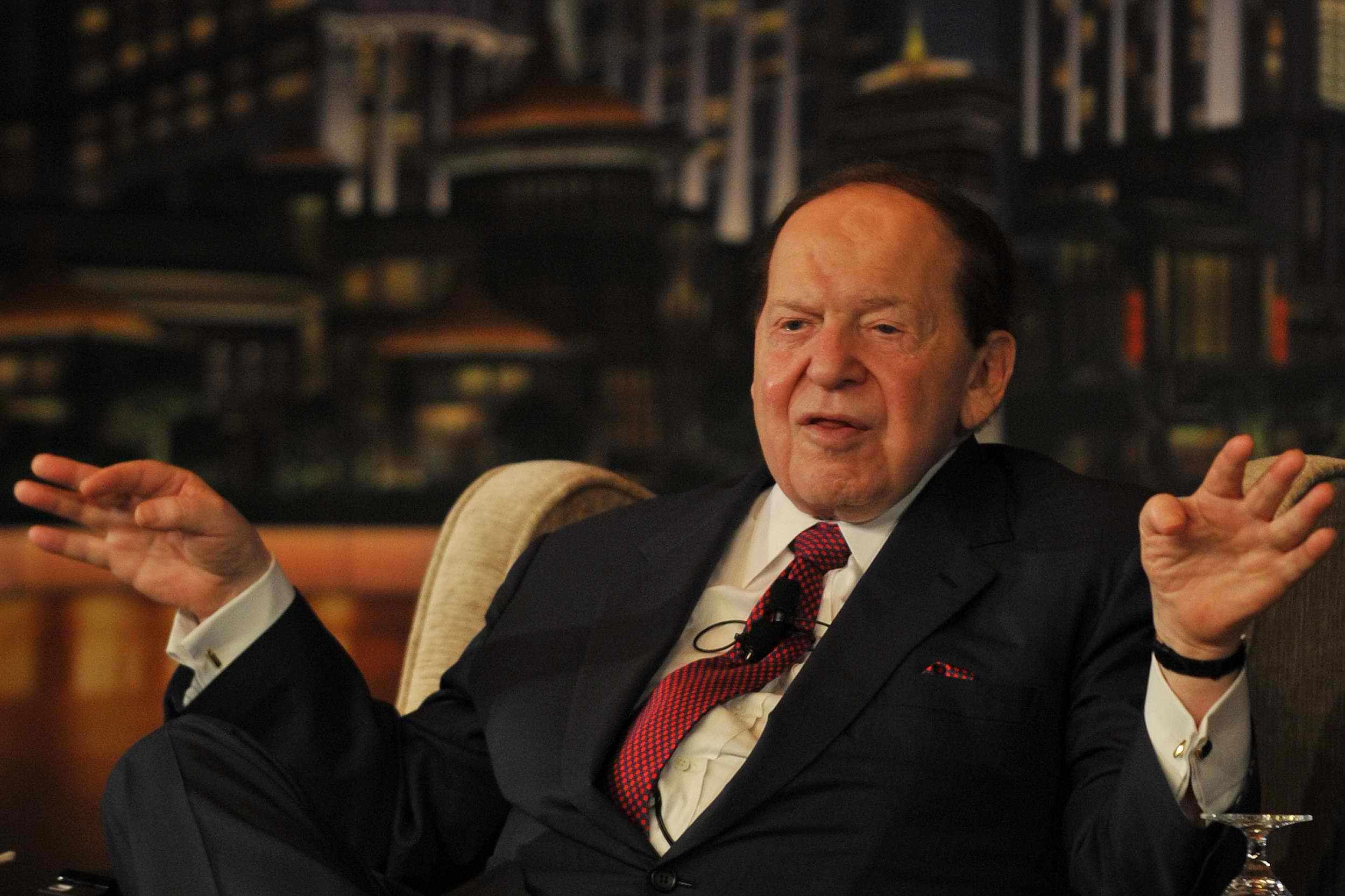 Adelson, meanwhile, broke several days of silence on the newspaper purchase late Tuesday night, telling CNN that he has “no personal interest” in the RJ’s new owner.

Ron Reese, a spokesman for Las Vegas Sands Corp., said in an email Wednesday that he had no information on the matter and wouldn’t comment on reports of Adelson buying the paper.

Newspaper officials have not publically identified those behind the new company. Publisher Jason Taylor didn’t return calls for comment Tuesday, but he has previously said he can’t identify the group’s backers, who approached the paper months ago.

He said he doesn’t expect them to be involved in news or editorial decisions because Gatehouse Media LLC, a subsidiary of the previous owner, will keep running the publication with a Sunday circulation of 184,000.

The secrecy has generated criticism.

Education reporter Neal Morton took to Twitter to note that quotes that appeared in some versions of the paper’s story about the sale later disappeared online. That included one in which News + Media’s manager, Michael Schroeder, implored staff to focus on their jobs and not worry about the new owners.

Schroeder offered no comment in an email Tuesday. Morton and other staffers who expressed frustration on social media and demanded to know the identity of the buyer have declined to comment to The Associated Press.

Michael Hengel, the newspaper’s editor, said he wasn’t surprised by the unease in the newsroom.

“We’re all concerned about the identity of the investors, and they’re expressing their concerns,” said Hengel, who referred further comments to Gatehouse boss Mike Reed. He didn’t respond to an email inquiry.

The speculation reached to Republican presidential candidate Jeb Bush, who tweeted Monday that the only question left unanswered from his meeting with the paper’s editorial board was: “Who owns the newspaper?”

U.S. Rep. Dina Titus, a Nevada Democrat whose district includes Las Vegas, called for transparency on the House floor Wednesday. She applauded the paper’s journalists for pressing for answers.

“We know nothing about the group, nothing about their business ties, their political positions, or their potential conflicts of interest … It’s time for the new owners to take off their mask and prove they have nothing to hide,” Titus said of the new buyers.

Ken Doctor, a media analyst, said the sale is troubling and unlike others with private owners. New buyers typically identify themselves and pledge publicly to keep the newspaper independent.

“You don’t say ‘no comment’ all the time. You might say it sometimes when you don’t know stuff or when there’s legal consequences and liabilities, but generally, the press has the general obligation to speak,” he said.

The Society of Professional Journalists urged the new owners to come forward, saying the group is “very disappointed and concerned by the owners’ lack of transparency.”

Speculation had been focusing on Adelson with pundits theorizing that the deep-pocketed GOP kingmaker could be planning to use the paper to sway the presidential race. Nevada is fourth in the primary process, with balloting in February.

‘You can’t keep it from the Justice Department’

Prior to the Wednesday night report, the publication’s previous story on the sale speculated that it’s Adelson, tracing his ties to the few details already known. U.S. Sen. Harry Reid, talking Tuesday to reporters in Washington, also hinted at the casino mogul, who owns an Israeli newspaper.

The secret won’t be held for long. The paper will have to disclose the owner to the federal government because it has a joint operating agreement with its rival, the Las Vegas Sun.

Brian Greenspun, publisher and editor of the Sun, which is delivered along with the Review-Journal, said he has not been formally notified of the sale and does not know the new owner’s identity.

“You certainly can’t keep it from the Justice Department,” Greenspun said.