OTTAWA — Even as the economic hurdles pile up, Prime Minister Justin Trudeau insists his pledge to balance the federal books in four years is “very” cast in stone.

On top of the balanced budget, Trudeau told The Canadian Press on Wednesday that the Liberal government will also live up to its other fiscal “anchor” to lower the debt-to-GDP ratio every year until the end of its mandate.

Trudeau’s remarks follow several revelations that his new government is standing on significantly shakier fiscal footing than it had predicted.

For example, the Liberals have recently shied away from another election commitment: to keep annual deficits over the next two years under $10 billion. 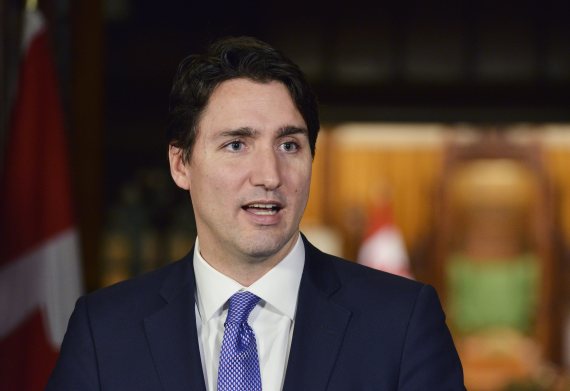 Prime Minister Justin Trudeau speaks with media in the foyer of the House of Commons on Parliament Hill in Ottawa on Wednesday, Dec. 16, 2015. (Matthew Usherwood/CP)

Trudeau was asked Wednesday how cast in stone his pledge was to balance the budget in four years.

“Very,” he said during a year-end roundtable interview with Canadian Press journalists in Ottawa.

“I think one of the things that Canadians expect is a level of fiscal responsibility that we’ve been able to demonstrate in the past and we’re certainly going to demonstrate it in the future.”

The Liberals, who made billions of dollars in campaign spending vows, are facing many obstacles that stand in the way of fulfilling their balanced-budget goal.

Pulling the books back into the black is a tougher target than lowering the debt-to-GDP ratio, which represents a government’s capacity to pay back debt. The ratio — also known as the debt burden — is reached by dividing total federal debt by the overall size of the economy, as measured by nominal GDP.

“You can spend a lot of time talking about hypotheticals and I’m not going to engage in that.”

Last month, the government said in its fall fiscal update that the books inherited from the Conservatives and a weaker-than expected economy will drive the country billions of dollars deeper in the hole than it had anticipated during the campaign.

The parliamentary budget office later issued forecasts that suggested the Liberals could be poised to generate annual deficits up to $15 billion once their costed, big-ticket election pledges are accounted for. In addition, the party has also made several uncosted vows.

Earlier this month, the Liberals revealed that their new tax package, which will raise taxes on the highest earners and lower the rate on the middle tax bracket, will actually siphon more than $1 billion net per year from the treasury. In their platform, the Liberals had predicted the plan would be revenue neutral.

Trudeau vowed during the campaign to respect the $10-billion upper limit for deficits in 2016-17 and 2017-18 unless the economic situation got radically worse.

“Many of you pressed me on, ‘Is that an absolute cap? What happens if the economy gets significantly worse?'” Trudeau said Wednesday.

“And I said, ‘We’re going to stay open with Canadians about what we need to do to create growth.’

“What we were elected on was a commitment to help Canadians grow the economy and that’s what we’re going to stay focused on.”

The Liberals are banking that their commitments — to spend billions on infrastructure and to implement tax changes benefiting middle earners — will kick-start the struggling economy and create jobs.

When asked if balancing the budget would involve austerity, Trudeau said he’s going to focus on growing the economy in responsible, meaningful ways.

“…we are going to put forward a plan that is going to invest in Canadians in education, in innovation, in infrastructure that’s going to create growth.”

Along the way, he said he’s committed to being open and transparent about the fiscal steps involved in helping the economy.

Trudeau was also asked about projections that it could take longer than four years for infrastructure cash to trickle through the economy and how the math behind his tax changes didn’t work out quite as well as he had planned.

“You can spend a lot of time talking about hypotheticals and I’m not going to engage in that,” he said.

“What I am going to do is what I’ve always done is say, look, we are going to put forward a plan that is going to invest in Canadians in education, in innovation, in infrastructure that’s going to create growth.”
Source: HP