OTTAWA — The most-important weak spot in the armour of the country’s financial system — climbing household debt — is increasingly concentrated among younger Canadians, the Bank of Canada said Tuesday.

In its latest assessment of Canada’s financial health, the central bank said the most-indebted borrowers tend to be under 45 years old and usually earn less money, which would put them more at risk of income drops caused by an economic downturn.

The bank’s semi-annual financial system review was released as the economy struggles to build momentum after contracting over the first two quarters of 2015. The lack of economic growth early in the year was largely due to the sharp tumble in commodity prices. 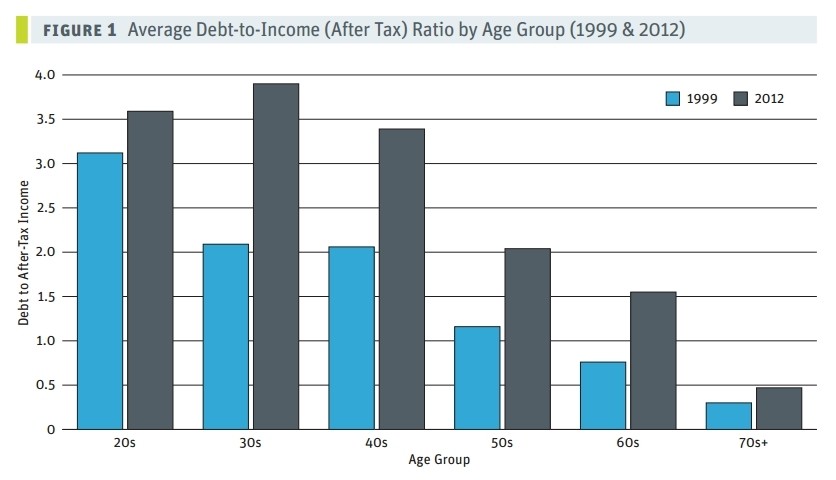 This chart from a recent report from the Canadian Centre for Policy Alternatives shows people in their 20s have the highest debt loads, but people in their 30s and 40s experienced the largest increase in debt since the turn of the century.

The Bank of Canada, which lowered its trend-setting interest rate twice in 2015 to cushion the blow of the resources slump, projects the economy to strengthen with lots of help from improvements in the United States.

In the meantime, Canadian borrowers have helped carry the load for the economy and, as a result, the key vulnerability of household debt has continued to rise.

The bank, however, said that while income growth has failed to keep pace with mounting mortgage credit, the chance of household debt becoming a serious problem remains low and is likely to fade as the economy picks up steam. It added that so far there has been little evidence of significant increases in delinquency rates.

Still, the report contained numbers that show the proportion of households in the shakier position of holding debt higher than 350 per cent of their gross income has doubled to eight per cent since the 2008 financial crisis. The increase is mostly due to the extended era of low interest rates.

Meanwhile, the share of Canada’s household debt held by these higher-risk borrowers was close to $400 billion after rising to 21 per cent from the pre-crisis level of 13 per cent. These households also tend to be in British Columbia, Alberta or Ontario.

The likelihood that a household would be unable to make its debt payments following an adverse economic event increases significantly when its debt reaches above 350 per cent of its gross income, the bank said.

“What matters most for assessing debt sustainability … is determining which households have taken on the most debt and whether they are able to repay it,” the bank wrote.

The report also pointed to particular weak spots caused by conditions like soaring house prices and risks such as a severe recession, a spike in unemployment and a prolonged period of low commodity prices.

When it comes to the vulnerability and risks caused by mounting housing prices, Bank of Canada governor Stephen Poloz credited the federal government for its recent decision to tighten mortgage-lending regulations on properties over $500,000 in an effort to cool overheated markets such as Toronto and Vancouver.

“Certain vulnerabilities are still edging higher, but recent changes by Canadian authorities to the rules for mortgage financing will help to mitigate these risks as we move into 2016,” Poloz said in a statement that accompanied the financial system review.

“Housing activity should stabilize in line with economic growth, as the driver of growth in the economy switches from household spending to non-resource exports.”