LCBO Could Sell Pot Once It's Legal, Kathleen Wynne Says

TORONTO — It would “make a lot of sense” for Ontario’s government-run liquor stores to sell marijuana if the federal Liberals make good on their promise to legalize pot, Premier Kathleen Wynne said Monday.

The new federal government’s throne speech earlier this month included a pledge to “legalize, regulate and restrict access to marijuana,” following up on a long-standing pledge by Justin Trudeau’s Liberals.

The Liquor Control Board of Ontario, which has 650 stores across the province and a virtual monopoly on alcohol sales, has the experience and expertise to sell legalized marijuana in a responsible way, said Wynne.

“It makes sense to me that the liquor distribution mechanism that we have in place, the LCBO, is very well suited to putting into place the social responsibility aspects that would need to be in place,” she said. “Obviously I don’t know what the timeline is with the federal government, but it seems to me that using that distribution network of the LCBO…I think that makes a lot of sense.” 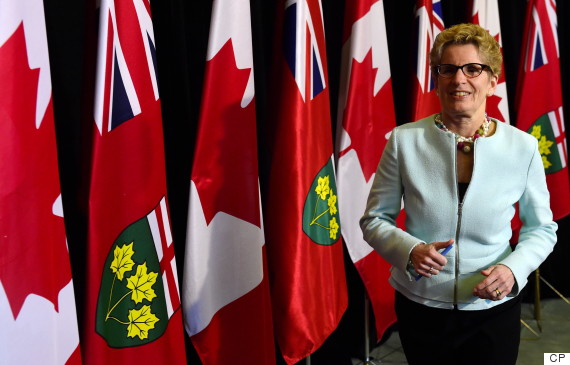 The LCBO said it would take direction from the province on how to proceed if the federal government follows through and legalizes recreational marijuana.

“Obviously we have been monitoring the situation and its potential implications,” said LCBO spokeswoman Christine Bujold. “However, without federal legislative change and specific direction from the provincial government, it would be premature for us to work on any concrete operational plans.”

The Ontario Public Service Employees Union said in November that marijuana should be sold in LCBO stores once it’s legalized.

“Marijuana must be a controlled substance, and no one has more experience retailing controlled substances than the workers at the LCBO,” said OPSEU president Smokey Thomas. “There needs to be a strong regulatory framework in place, including minimum age limits, a ban on marketing, and a plan to prevent cannabis-impaired driving.”

Wynne said other provinces are considering similar options to retail marijuana through their already-established distribution networks.

“No one has more experience retailing controlled substances than the workers at the LCBO.”

The unions representing workers at government-owned and private liquor stores in British Columbia formed a partnership to advocate for the sale of legalized marijuana through the province’s existing retail system for alcohol.

The federal Liberals first promised to legalize pot more than a year ago, when they were in opposition, prompting a barrage of Conservative attack ads that asserted marijuana would be sold to children through corner stores.

Officials say the first step in the path to legalization of marijuana will be to establish a provincial, territorial and federal task force to hear from public health, substance abuse and public safety experts.