Blackberry Mounts A Comeback With The Android-Based Priv

PARIS — The world is about to go on a carbon diet. It won’t be easy — or cheap.

Nearly 200 nations across the world on Saturday approved a first-of-its-kind universal agreement to wean Earth off fossil fuels and slow global warming, patting themselves on the back for showing such resolve.

On Sunday morning, like for many first day dieters, the reality set in. The numbers — like calorie limits and hours needed in the gym — are daunting. 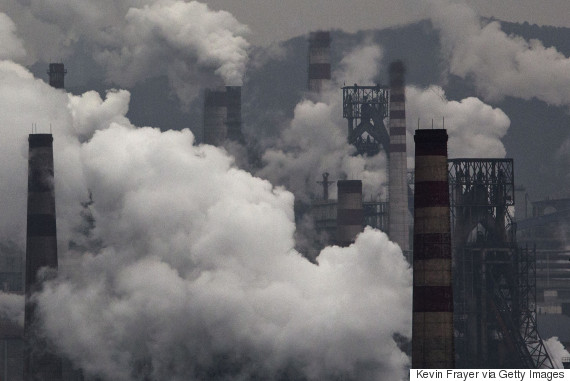 Smoke billows from a smokestack on Nov. 19, 2015 in the industrial province of Hebei, China. (Photo: Kevin Frayer/Getty)

How daunting? Try more than 7.04 billion tons (if you really want to have your eyes bug out, that’s 15.5 trillion pounds). That’s how much carbon dioxide needs to stay in the ground instead of being spewed into the atmosphere for those reductions to happen, even if you take the easier of two goals mentioned in Saturday’s deal. To get to the harder goal, it’s even larger numbers.

In the pact, the countries pledged to limit global warming to about another degree Celsius (1.8 degrees Fahrenheit) from now — and if they can, only half that.

Another, more vague, goal is that by sometime in the second half of the century, man-made greenhouse gas emissions — which includes methane and other heat-trapping gases as well as carbon dioxide — won’t exceed the amount that nature absorbs. Earth’s carbon cycle, which is complex and ever-changing, would have to get back to balance. 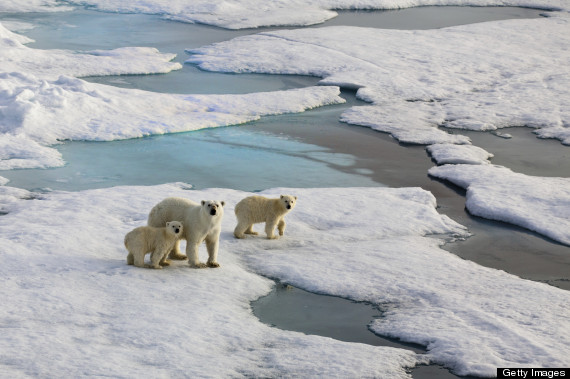 Polar bear mother with two cubs on an ice flow in the Arctic Ocean. (Photo: Getty)

In practice, that means the world has to emit close to zero greenhouse gases by 2070 to reach the easier goal, or by 2050 to reach the harder one, said John Schellnhuber, director of the Potsdam Institute for Climate Impact Research in Germany.

Oh and by the way, the harder goal — limit warming by another half a degree Celsius (0.9 Fahrenheit) — is probably already impossible, said Joeri Rogelj at the International Institute for Applied Systems Analysis in Austria. Most likely the best the world can hope for is overshooting that temperature by a few tenths of a degree and then somehow slowly — over decades if not centuries — come back to the target temperature.

That may involve something called negative emissions. That’s when the world — technology and nature combined — take out more carbon dioxide from the air than humanity puts in. Nearly 90 per cent of scenarios of how to establish a safer temperature in the world involves going backward on emissions, but it is also so far not very realistic, said Kevin Anderson, deputy director of the Tyndall Centre for Climate Change Research in Britain.

Negative emissions involve more forests, maybe seeding the oceans, and possibly technology that sucks carbon out of the air and stores it underground somehow. More biomass or forests require enormous land areas and direct capture of carbon from air is expensive, but with a serious sustained research effort costs can probably be brought below $100 per metric ton, said engineering and policy professor Granger Morgan of Carnegie Mellon University.

Leading up to the Paris Agreement, nearly every nation formed an individual action plan to cut or at least slow the growth of carbon pollution over the next decade or so. Richer nations that have already developed, like the United States, Europe and Japan, pledged to cut now. Developing nations that say they need fossil fuels to pull themselves out poverty pledged to slow the rate of growth for now, and to cut later.

“The EU and U.S. are all on Slim-Fast,” said Paul Bledsoe, a former Clinton administration climate official. “China’s still hitting fast food, but will have to stop soon.” 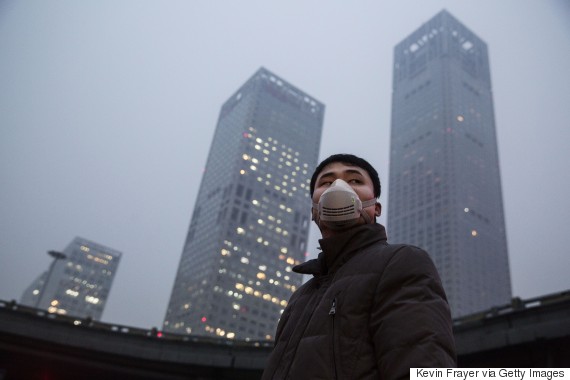 A Chinese man wears a mask to protect against pollution in heavy smog on Dec. 8, 2015 in Beijing, China. (Photo: Kevin Frayer/Getty)

China, the world’s top carbon polluter, will eventually have to make the biggest cuts. Overall, for the world to hit its new target, global carbon dioxide emissions will have to peak by 2030, maybe earlier, and then fall to near-zero, experts said. Those levels have been generally rising since the industrial revolution. A new study suggests emissions may have fallen slightly this year, but that may be a blip.

Without any efforts to limit global warming, the world would have warmed by 3.5 degrees Celsius (6.3 degrees Fahrenheit) from now by 2100, according to Climate Interactive. But China’s submitted plan alone would cut that projected warming by 1.3 degrees, according to Climate Interactive. The U.S. plan trims about six tenths of a degree of the projected warming without a global deal.

“Clearly countries must be exercising their low-carbon muscles more.”

That all sounds good, but the goals the nations have set aren’t enough. Taken together, they would still allow temperatures to rise 2.5 degrees Celsius (4.5 degrees Fahrenheit) by the end of the century from now, so to reach the goals agreed on this weekend countries will need to do more, Climate Interactive found.

Another climate modeling group, Climate Action Tracker, is slightly more optimistic, but still finds the nations’ plans would miss the goal of limiting temperature rise to one more degree. It says the current proposals would allow a rise of 1.7 degrees Celsius (1.25 degrees Fahrenheit).

Countries agreed Saturday to take another look at their goals every five years.

French President Francois Hollande took the first step as he praised the Paris Agreement. He said France would ratchet up its goals and efforts earlier than required and challenged other nations to do the same.

He said that Saturday.
Source: HP