The 5 Best Gifts Working Mothers Give Their Children

OTTAWA — A Liberal government appeal for former Conservative appointees to voluntarily step down has been marked “return to sender” by Canada Post.

The chairwoman of the board of directors of the Crown corporation says Canada Post president Deepak Chopra went through a rigorous selection process and his contract extension followed best governance practices.

Chopra is one of dozens of federal appointees whose terms were extended by the Conservatives in advance of the October election, some more than a year before their existing mandates expired.

Dominic LeBlanc, the government House leader, sent letters this week to 33 individuals on behalf of Prime Minister Justin Trudeau, requesting they voluntarily resign and resubmit their names to a new appointment process.

The government gave them until Dec. 18 to respond. 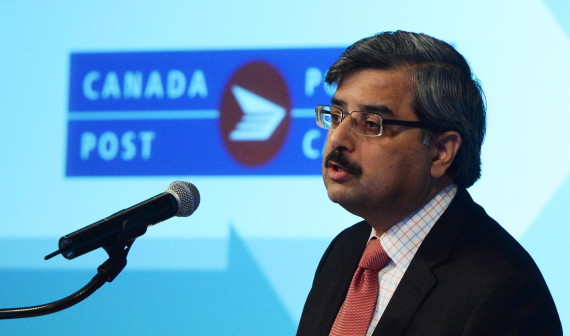 Canada Post fired back within 48 hours and forwarded its response to The Canadian Press.

“We respectfully ask you to withdraw the Dec. 7, 2015 letter,” wrote Sian Matthews, the Conservative-appointed chairwoman of Canada Post’s board.

“Responsible leaders, like Mr. Chopra, who commit to public service in this great country, should be celebrated and not shamed.”

Her letter points out that a House of Commons committee adopted a measure, following a critical auditor general’s report in 2009, that set out guidelines for notifying full-time appointees of their job status “at least six months before the end of their term.”

“Responsible leaders, like Mr. Chopra, who commit to public service in this great country, should be celebrated and not shamed.”

“The timing of the (Chopra) renewal is consistent with the standing committee recommendations,” wrote Matthews.

LeBlanc has not said whether the government plans to fire anyone who refuses to go quietly.

“We thought that those (appointments) constituted an abuse of process by a previous government and we’ve asked 33 individuals to consider doing the right thing in our judgment, in declining to accept those appointments,” LeBlanc said Tuesday.

“If they want to submit their candidacies in a more open and transparent process, we would of course be happy to look at them.”

Appointments made just before election

The Harper government made the appointments in the summer, just before the federal election was called. Some four dozen — including members of the Immigration and Refugee Board, National Energy Board, Telefilm Canada and Via Rail — involved appointments to fill positions that would not become vacant until well after the election. Some of the renewals weren’t due to expire for up to a year after the Oct. 19 vote.

Rona Ambrose, the interim Conservative leader, said the new government has “every right” to terminate the appointments, but urged the Liberals to assess each individual on their merits.