This Chart Shows Why House Prices In Toronto, Vancouver May Not Come Down Anytime Soon

Is Crowdfunding Charities' Friend Or Foe?

Home sales in Vancouver soared by 40 per cent in November, compared to a year earlier.

Prices for single-family homes in suburban Toronto jumped 13.5 per cent in the past year, an increase of nearly $100,000 on average. Affordability in the GTA is the worst it’s been in more than two decades.

Insane, right? There’s no way it can last. A growing number of experts say Canada’s great housing correction is just a question of when, not if.

But hold on. According to Stefane Marion, an economist at National Bank Financial, we’re missing one crucial element in the debate about house prices: Jobs.

Toronto and Vancouver have created a lot of them, and it’s attracting migrants from around the country and the world. The national job numbers may look weak, but what job growth there has been, it’s largely been in these two cities where house prices are out of control. National Bank’s employment index shows job growth in Toronto and Vancouver has been double the national average since 2010. 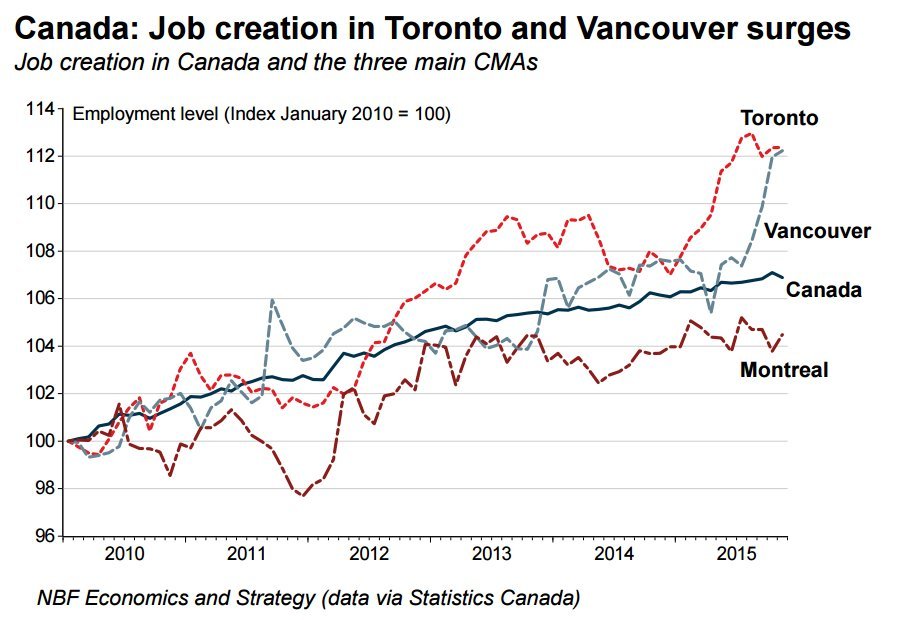 “Large inflows of permanent immigrants (about 240,000 in the past year) coupled with the misfortune of commodity-producing regions have redirected … population migration flows towards Toronto and Vancouver,” Marion wrote in a client note this week.

“So long as this situation endures, home prices in those two cities are unlikely to weaken significantly.”

What If The Whole World Was As Insane As Toronto’s Housing Market?

Of course not everyone is buying the argument that everything is fine in the housing market.

That’s especially true in Toronto’s detached-home market, where buyers are getting frustrated with a frenzied pace of sales that hardly gives you time to think over what should be the most serious financial decision of your life.

“In 2015, going to see a new listing for a single-family home within 24 hours of the property hitting the market isn’t gaining an edge, or using a tactic, or thinking outside the box,” Toronto Realty Blog writes.

The blog put together a video asking: “What if the whole world worked like the Toronto housing market?”

If it did, you’d miss every opportunity in the blink of an eye. Check out the video below.