How To Successfully Navigate Your Office Holiday Party

Forty-two years after it was conceived from a hungry man’s dream, the Halifax donair is finally getting the municipal recognition it deserves.

Mayor Mike Savage proclaimed Tuesday that the spicy meat treat, tempered with swirls of a milky sweet and sticky garlicky sauce, will now be known as the Maritime city’s “official food.”

Calling the city’s unique take on the donair an “asset and opportunity,” Halifax city councillors forced a tie-breaker vote over the motion proposing giving the food special status. Savage cast the deciding vote in favour.

The declaration ends debate among ambivalent politicians after the issue was thrust into the spotlight months earlier in a staff report, which outlined the case for officials to consider making the donair the city’s official food.

Regional epicureans reacted with cheers and jeers to the decision:

Just in time for Supper, #Halifax declares the #donair our official food. Cardiologists now see this as a great place to build a future .

But before Savage cast his deciding ballot, at least one councillor spoke out, asking his colleagues a question probably better suited for philosophers than a chamber of municipal politicians.

“Half of CBC News, it seemed to me, at noon hour was dedicated to donair,” said Coun. Bill Karsten. “Is this what we are about?” 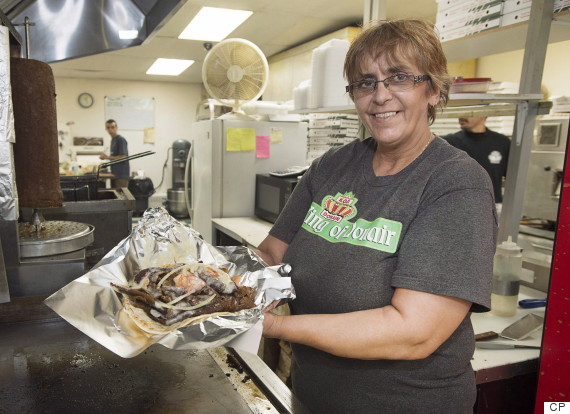 What triggered the debate was a request back in October made by Halifax Regional Council for a report to be submitted to consider the merits of the donair for the city’s seal as its official food.

“The donair is Halifax’s most unique and famous delicacy,” reads an excerpt from the report suggesting there’s a tourism draw to making the donair the city’s official food.

Though the report failed to make any overt recommendations to council, its author provided a detailed description to those unfamiliar with what a Halifax donair is:

The Donair is made of heavily spiced ground beef that is shaped into a large loaf and roasted on a vertical rotisserie, then shaved and seared on a flat top range. The meat is placed on a thin, Lebanese-style pita and topped with tomatoes, raw onions and a sauce. The Donair Sauce is an addictively sweet blend of evaporated milk, vinegar, garlic powder and sugar. The sandwich is wrapped in tinfoil and eaten out of hand.

According to the filing, the origins of the Halifax recipe is credited to Peter Gamalakos, a Greek immigrant who opened the city’s first donair shop in 1973.

Though Gamalakos died in 1991, the report notes those living up, downwind and around his The King of Donair Quinpool Road location, have embraced his sweet twist on the gyro into a “staple food item for families and students in the area.”

“The donair has brought recognition to Halifax unlike any other food,” the report read.