Bananas Under Threat By Deadly Disease, Could Disappear Forever

The bananas we eat could become a thing of the past as a deadly fungus threatens their existence.

It’s not the first time, either. Panama Disease wiped out a sweeter version of the banana called Gros Michel by the 1960s. According to the journal PLOS Pathogens, a variant of the disease called Tropical Race 4 (TR4) could wipe out the Cavendish variety — the ones we eat today.

Panama disease is soil-borne and can lie dormant for years, meaning many banana farmers wouldn’t know if their crops became infected.

Although Cavendish bananas are resistant to Tropical Race 1— the variant that killed the Gros Michel banana— TR4 is more highly evolved, posing a huge threat to the $11-billion industry, according to Quartz.

But TR4 emerged in Cavendish bananas in the 1960s, and was identified as the cause in 1994, according to the study.

“We know that the origin of [Tropical Race 4] is in Indonesia and that it spread from there, most likely first into Taiwan and then into China and the rest of Southeast Asia,” he told Quartz. 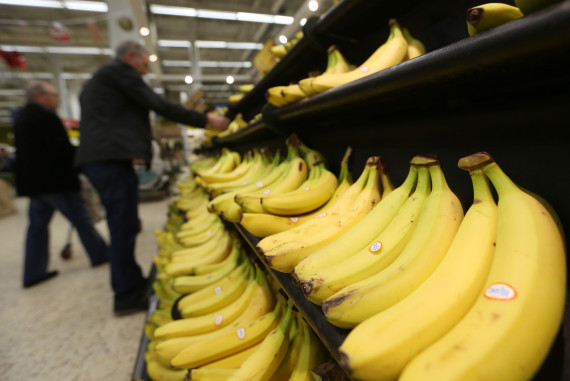 A shopper selects a bunch of bananas from the fruit display at the Tesco Basildon Pitsea Extra supermarket, in Basildon, U.K., on Tuesday, Dec. 1, 2015. (Photo: Bloomberg)

There’s also not much we can do about it.

Despite the initial TR4 outbreak, there isn’t a replacement for Cavendish bananas that meets global market demands, according to the study.

The study’s authors say their findings highlight the need for “global awareness and quarantine campaigns in order to protect banana production from another pandemic that particularly affects vulnerable, small-holder farmers.”
Source: HP