OTTAWA — The federal Liberals signalled in Friday’s speech from the throne that they want to go ahead with an ambitious spending agenda, despite a tighter fiscal framework.

Interim Conservative Leader Rona Ambrose called the speech an outline for “big government” and “big spending,” and a document that lacked “economic focus.”

Aaron Wudrick, federal director of the Canadian Taxpayers Federation, was equally blunt: “They’ve made a lot of big promises and the government will be hard pressed to find a way to pay for them all.”

Experts suggest the government could stay on course with its agenda, although the budget outlook is less rosy than it was before the election campaign. 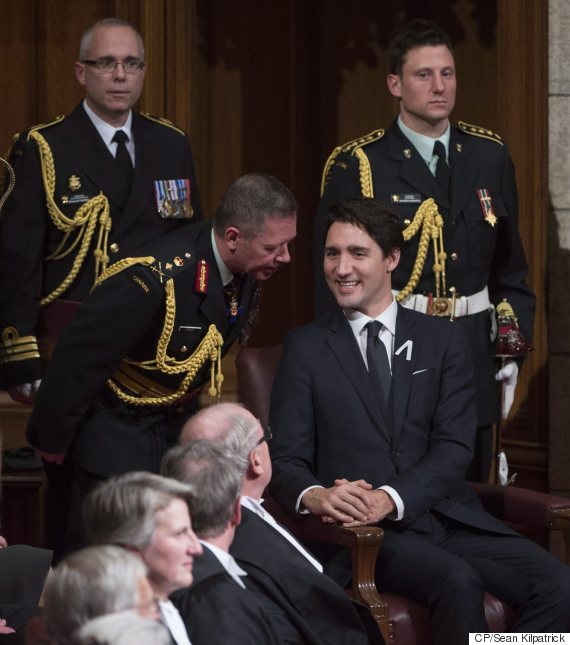 Prime Minister Justin Trudeau smiles during the reading of the speech from the throne. (Photo: Sean Kilpatrick/CP)

The key for the Liberals, experts say, is keep deficits in check.

“What matters most is trajectory,” UBC economic Kevin Milligan, who previously, but no longer, advised the Liberals on economic policy, wrote in an email. “I care a lot more that (the) deficit is heading in (the) right direction over next four years than what it hits in Year 1.”

The cumulative deficit the Liberals propose to run over the next three years tops $25 billion, with the deepest yearly deficits in the next two years, when they are planned to reach almost $10 billion a year.

The Liberal infrastructure plan accounts for about half the new debt over  three years. The government hopes the increase in spending helps grow the economy and boost federal revenues so the budget returns to balance in four years.

University of Laval economist Stephen Gordon said infrastructure should account for a higher portion of debt over that time if the government wants to spur the economy. The other debt, he said, is “borrowing to pay current expenditures and that’s not a good habit to get into for three years in a row.” 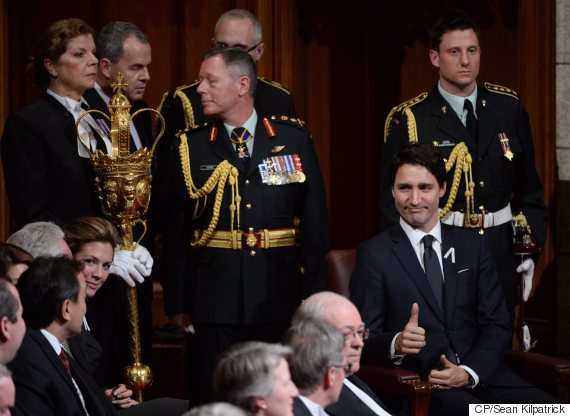 Prime Minister Justin Trudeau gives a thumbs-up before the Speech from the Throne in the Senate Chamber on Parliament Hill in Ottawa, Friday, December 4, 2015. (Photo: Sean Kilpatrick/CP)

The throne speech didn’t repeat a campaign pledge to keep deficits at no more than $10 billion, a promise that came with a caveat that deficits could be higher if the economy became “radically worse.” Employment numbers released by Statistics Canada on Friday showed the country shed 35,700 jobs in November, a higher-than-expected drop that inched the unemployment up one-tenth of a percentage point to 7.1 per cent.

The Liberals built their platform around budget projections from July that projected surpluses in the 2016-17 and 2017-18 fiscal years. The federal Finance Department revised those projections last month and the parliamentary budget office followed this month, predicting the federal government would run deficits even before Liberal promises are enacted.

Economists have argued that the balanced-budget vow isn’t as important a measure of federal finances as another, less sexy, figure: the ratio of debt to gross domestic product. To keep that figure on a downward trajectory, the economy must grow at a faster rate than does the debt.

“As long as that is ideally going down, or at the very least not increasing, they can still afford some deficit room,” said Allan Maslove, a retired professor from Carleton University who studies government budgeting.

Western University economist Mike Moffat, who also advised the Liberals on their campaign platform, suggested the deficit could go as high as $24 billion a year, so long as the economy keeps growing, even if it is slower than existing forecasts.

He cautioned, however, that if Canada slips back into recession then “all bets are off.”

In that case, governments are usually left with four options, Maslove said: Raise taxes, slow down an ambitious spending agenda, run deeper deficits, or a combination of these.

“There are pros and cons for each one of those things, but there is no other way to go,” he said.