WATERLOO, Ont. — Inside a few Canadian school buses a new sensor technology is helping keep drunk drivers off the roads.

It’s part of a test project underway at Sober Steering, a Waterloo, Ont.-based startup that aspires to make the breathalyzer obsolete with a different way to monitor blood-alcohol levels that’s both faster and cheaper.

Sober Steering uses touch-based biosensor technology to monitor the person behind the wheel, essentially sniffing alcohol through their skin.

Before they start the engine, the driver must place their palm on a sensor built into the steering wheel to activate the vehicle’s ignition.

When they’re on the road, Sober Steering requires the driver to “check in” with the system to ensure they haven’t sneaked a few sips. If the driver consumed alcohol it would only take the sensor five minutes to detect the ethanol off the palm of their skin.

If it does, the system alerts a home base, which can be police or a transit system’s headquarters.

Catherine Carroll, Sober Steering’s chief operating officer, believes the technology could reshape how we monitor drinking and driving. Plans are to gradually roll out Sober Steering in various fleet vehicles, like construction machinery and coach buses. 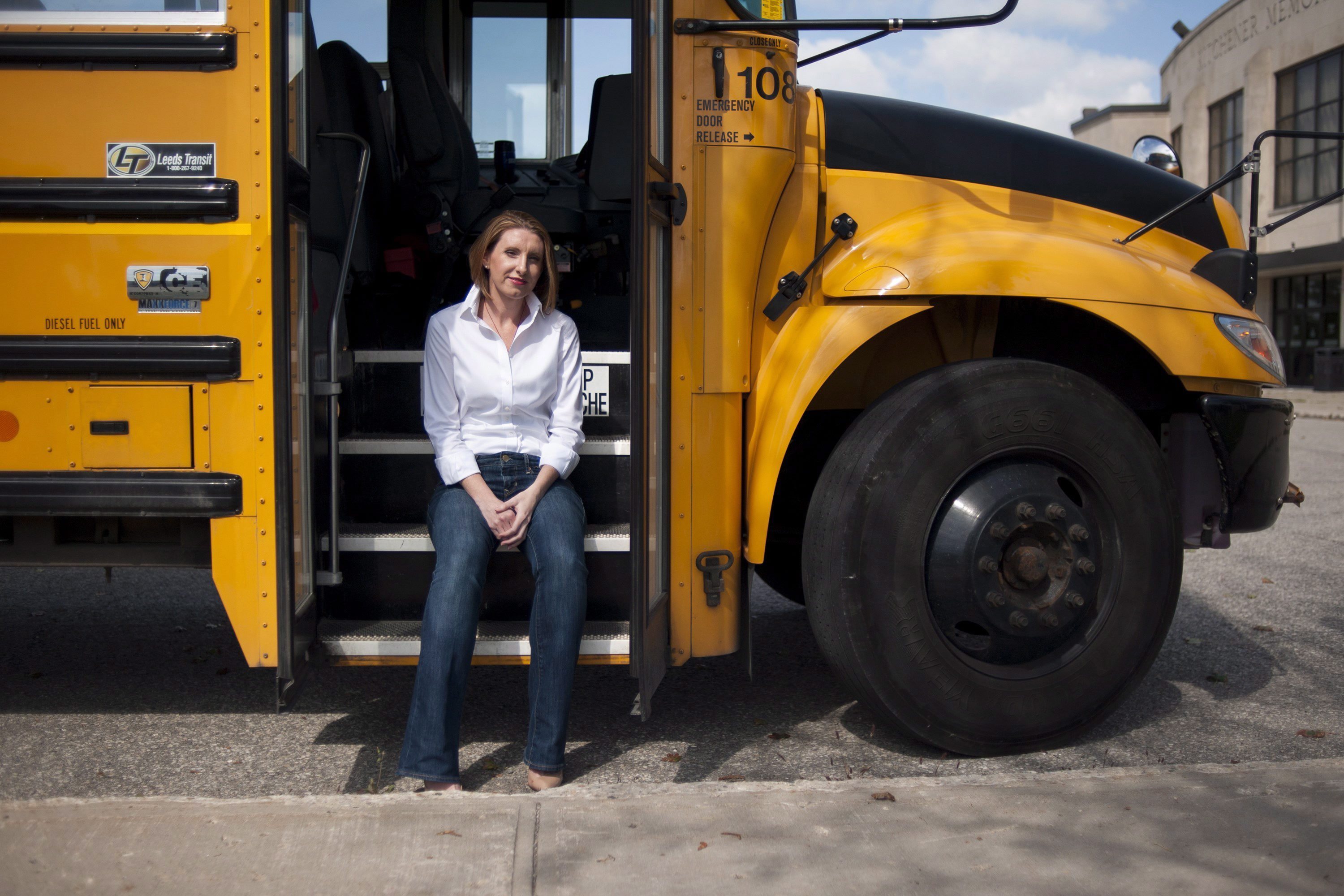 Catherine Carroll, COO and acting CEO of Sober Steering, poses for a photo in a school bus in Kitchener, Ont., Thursday, Sept, 24, 2015.

But before that happens, the school bus industry is helping launch the concept, partly because the entire industry is a lightning rod for attention when drivers are caught intoxicated.

“Almost every week you have a public arrest of a school bus driver somewhere in North America that’s been drinking and driving with kids in the back,” Carroll said.

“Now that’s a public arrest — that doesn’t include kids calling their parents and saying the bus driver is drunk and then the (bus) company coming and handling it, or the company handling it first thing in the morning,” the next day, she added.

Sober Steering is marketing its sensors as a way to stop those problems before the engine starts. Three school bus companies in the Waterloo area are already backing the system in a pilot project.

“It’s a springboard into other vehicles, but also there’s something inherently emotional about a big yellow school bus,” Carroll said.

“It’s filled with children and that’s our most precious cargo.” 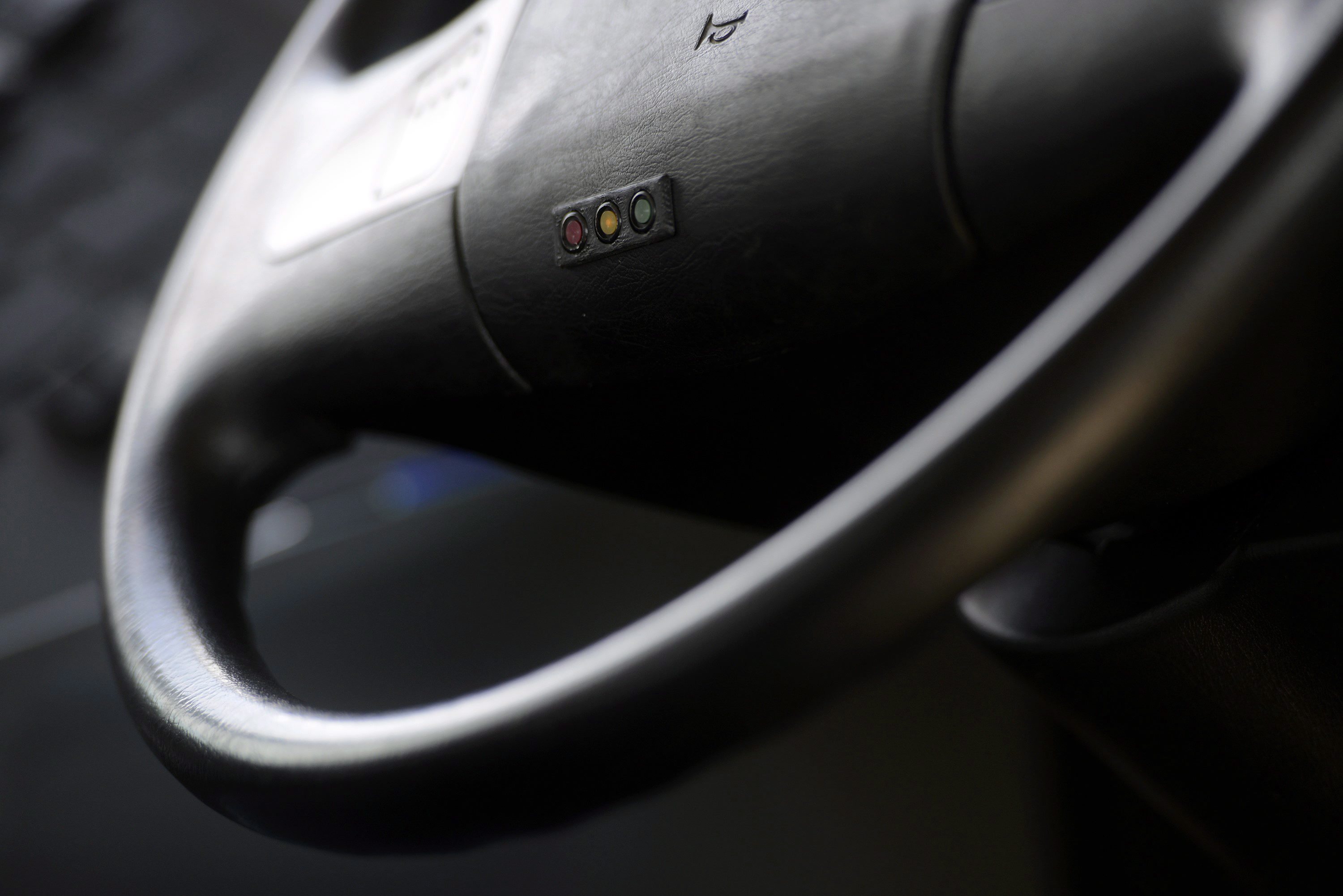 The steering wheel of a bus equipped with the Sober Steering biosensors, which detect if a driver has been drinking, in Kitchener, Ont., Thursday, Sept, 24, 2015.

Sober Steering began with Dennis Bellehumeur, a man from Windsor, Ont., who came up with the concept.

Around that time, Carroll, who grew up in Florida, was working as a New York investment banker, but she had a change of heart during the economic crisis and changed careers to focus on financial advice to tech startups.

That’s when she crossed paths with Bellehumeur, who was looking to turn his idea into a business. The two worked together until Bellehumeur eventually left the company. He has since died.

Carroll oversaw turning the idea into an actual device with the help of her physicist father.

“Certain sensors were being used in the military where they would put chemical sniffers on the tip of a weapon, (it) would go to a specific location … and sniff the air to detect chemical weapons,” Carroll said.

“It was a matter of how we designed one for commercial use at a sensitivity level that would be required for the human body.”

In 2009, with the help of provincial funding, Sober Steering brought on researchers from the University of Waterloo to help develop the sensors.

However, there are a few setbacks in the current model. For example, hand sanitizers can lead the sensors to inaccurately detect an intoxicated driver within roughly a minute of application, Carroll said.

It’s also not yet ready for consumer vehicles where the driver could get a passenger to easily apply their hand to pass the sobriety test.

Those kinks are being worked out, Carroll said.

Once that happens, she hopes to bring Sober Steering into the mainstream for convicted drunk drivers who require a monitoring device such as an ignition interlock but want to remain discreet.

“It’s really hard to park in the employee parking lot because people see you using it,” she said.

“We wanted something that was very low profile, so that even the people in your car wouldn’t know about it unless you were drunk.”

Bringing those plans to market could take years of working through both technological adjustments and finding partners in the auto industry, but Carroll is hopeful that once the technology catches on, it will gain momentum.

“We’ve got gradual steps to take,” she said.