Corporate Tax Cuts May Be ‘One Of The Great Policy Blunders Of The Past Generation': Study

Corporate tax cuts were supposed to spur economic growth and job creation, but a new study looking at more than 90 years of data argues those cuts have done nothing to help growth — in fact, it shows they may have slowed the economy down.

That’s because businesses didn’t do what they were expected to do with their tax windfall, according to the study from the left-leaning Canadian Centre for Policy Alternatives.

Instead of turning the freed-up cash into investments that would create new economic activity and new jobs, large corporations started stockpiling larger cash reserves — or “dead money” as former Bank of Canada governor Mark Carney called it in 2012.

Over the past three decades, the governments of Progressive Conservative Brian Mulroney, Liberal Jean Chretien and Conservative Stephen Harper all reduced corporate income taxes. Today, the federal rate is at 15 per cent, down from a rate of 36 per cent in the 1980s.

It’s the lowest the rate has been since the Great Depression, and the country’s “corporate cash hoard” is near an all-time high.

According to StatsCan data, Canadian businesses were holding a near-record $680 billion in “dead money” in the second quarter of this year — more than two-thirds of a trillion dollars in foregone investment.

Many analysts say today’s large corporate cash reserves exist because of economic uncertainty. In the wake of the financial crisis of 2008/09, businesses have been hesitant to invest. Still, StatsCan data shows cash hoarding began to accelerate in the mid-1990s, long before that crash.

With corporate taxes coming down rapidly and repeatedly under the Harper government, the IMF estimated that Canada’s corporate cash hoard is growing faster than in any other G7 country.

“By leaving large firms with a greater share of pre-tax income, [corporate income tax] rate reductions have facilitated the hoarding of cash,” Jordan Brennan, an economist at Unifor, writes in the CCPA study. He points the finger specifically at large corporations, noting that small and medium-sized business are rarely ever in a position to hoard cash.

Brennan’s study is bound to be controversial, because — as Brennan admits — it flies in the face of conventional economic wisdom. It also contradicts some earlier research, such as this paper prepared for the Dept. of Finance, concluding that the corporate tax cuts that took place from 2001 to 2004 “led to higher investment.” 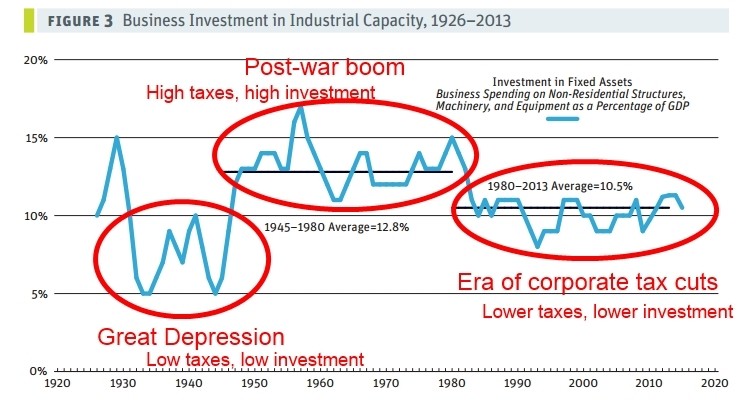 At first glance, Brennan’s data would suggest that the economy does better when corporate taxes are higher. But in fact, the study seems to show that corporate tax rates are often irrelevant to how well the economy is doing.

Brennan compared the tax rate against 52 different measures of economic health, and found no statistically significant relationship in 38 of them. (In other words, when those tax cuts happened, whatever else was going on was more influential to the economy’s strength.)

Hence Brennan’s argument that corporate tax cuts might actually be harming the economy. 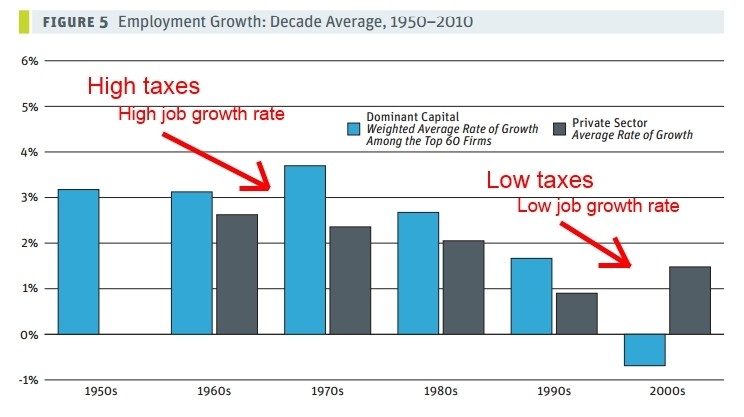 “If the findings contained in this paper are true, then [corporate income tax] rate reductions will go down as one of the great public policy blunders of the past generation,” Brennan writes.

“The empirical and statistical facts stubbornly refuse to support mainstream economic thinking on this matter.”

Everyone else is doing it, too

One of the most common arguments in favour of lowering corporate tax cuts is the fact that other countries have done it, too, and we have to do the same to hold on to business investment.

“The reality of the global economy is that countries compete with one another for investment, so any advantage is critical. And the corporate income tax rate is an important component of a positive economic environment,” the right-leaning Fraser Institute recently wrote.

The Dept. of Finance study cited above notes that Canada has a greater degree of foreign ownership than the U.S., and that makes Canada’s economy “particularly sensitive” to changes in the corporate tax rate.

The chart below, from the Washington-based Tax Foundation, shows corporate tax rates have declined significantly in all regions of the world over the past decade.

While supporters of low-tax policies applaud this shift, critics call it a “race to the bottom,” expressing fears that if trends continue, consumers in countries all over the world will eventually be saddled with their economy’s entire tax burden. 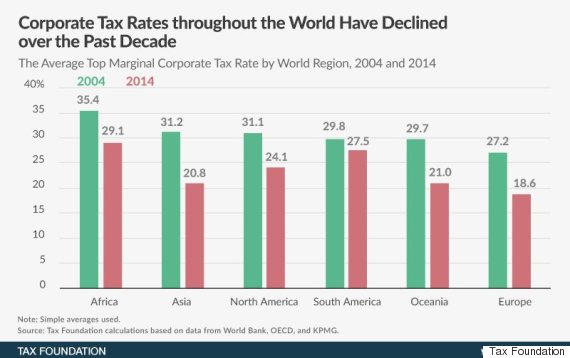