Black Friday's Little-Known Canadian Connection Dates Back To This Event

Among the many pictures on the walls of the Rocking P ranch house is one of owner Mac Blades with singer Ian Tyson and other local ranchers riding their horses across a snowy hillside in the Livingstone Mountain range of southwestern Alberta.

The photo made the front pages of both national newspapers in the fall of 2002 when Tyson, Blades and the Pekisko group of ranchers went public with their call for a moratorium on oil and gas development in the region.

Their call came on the heels of the worst prairie drought in more than 70 years.

Thirteen years later, Blades and his family are still ranching, running about 800 cows on 10,000 acres of land they own or lease. Drought slammed the region again this summer, but the Rocking P fared quite well this time. Part of it had to do with the relatively good spring moisture that carried them through the dry weeks. Most of it had to do with the grasslands Blades and others have been trying to protect. 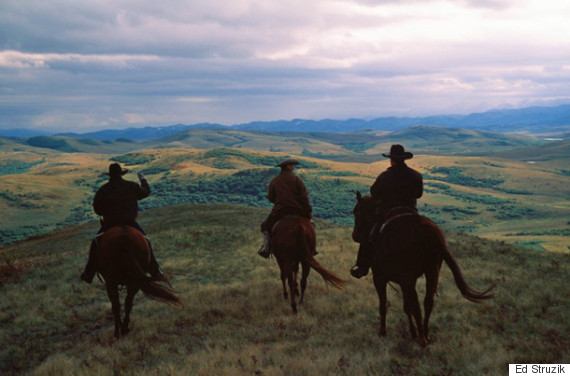 “Even in years of drought, we do better than most because our native grasslands capture and filter water, build and protect soil, and protect us from drought,” says Blades. “And because the weather is warming, it’s got to the point where we can let our animals out to graze in winter rather than spend money on fuel and feed to get them through the cold months. We just don’t have the cold winters we used to have.”

Blades and his fellow ranchers used to have difficulty convincing the Alberta government that the drought-resistant grasslands of southern Alberta were more valuable than the oil and gas that the energy industry would like to extract from the region. But if a slew of recent studies on climate change and drought on the Prairies prove to be correct, government officials will have to listen.

“There are prior droughts that are decades in length. When they reoccur in the future they will happen in a much warmer climate.”

According to a recent study by University of Regina drought expert David Sauchyn, exceptionally severe droughts are bound to occur in the future, and they will last a longer than anything seen since Europeans began settling the West

“In our lab here, we’ve constructed a 900-year history of prairie drought,” he says. “We have been relatively lucky on the Prairies since it was settled. There are prior droughts that are decades in length. When they reoccur in the future they will happen in a much warmer climate.”

If this past tells us anything about this future, it’s going to be much worse than anyone might imagine because there are going to be more people, more industry and just as many farmers and ranchers competing for a diminishing supply of water melting out of the snowpack and glaciers in the Canadian Rockies. 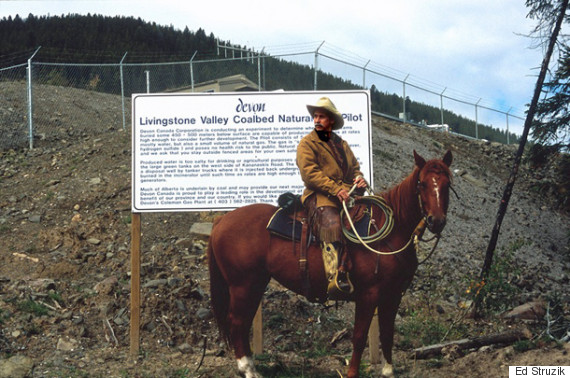 Until recently, coalbed methane and other energy developments threatened the headwaters of the rivers that maintain the natural grasslands of the Pekisko Creek region, where rancher Mac Blades lives. (Photo: Ed Struzik)

Like the Great Plains in the United States that have been struggling with water shortages for more than a half-century, the Prairie provinces of Canada are just beginning to suffer from the impacts of less water flowing downstream from the Rocky Mountains.

Since 1975, the glacier-covered area in the South and North Saskatchewan River basins on the Alberta side of the B.C. border has declined by about 37 per cent and 22 per cent respectively. Snowpack, which provides most of the water that flows downstream in spring and early summer, is also diminishing.

At the Marmot Creek Research Basin in southwestern Alberta, which has been operating almost continuously in the Rockies since 1962, recorded daily low winter temperatures have increased by five degrees Celsius, reducing snowpack volumes at low elevations by half and stream flow in Marmot Creek by 25 per cent over the past 50 years.

Even climate change-denying governments have had to respond. 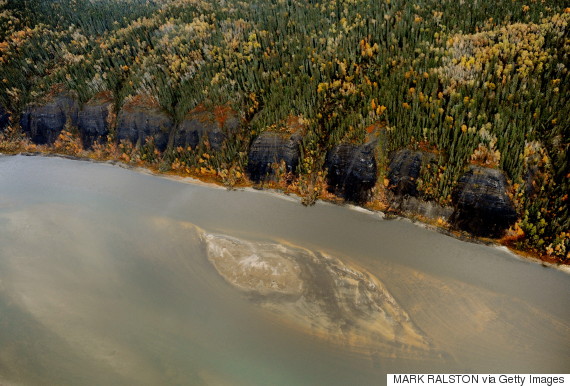 An aerial view shows rock containing oil deposits on the banks of the Athabasca River near the Fort McMurray, Alta. in October 2009. (Photo: Mark Ralston/AFP/Getty Images)

In 2006, the Alberta government was forced to close the South Saskatchewan, Oldman and Bow River basins to further water allocations because issuing more water licenses would have imperiled its legal obligation to provide a percentage of Rocky Mountain river flowing into Saskatchewan and Montana. And because of the drought this year, some energy companies were ordered to cut back on the amount of water they use.

That, says Sauchyn, is bad news for the oilsands industry that currently uses 4.4 per cent of the annual flow of water on the Athabasca River. He doesn’t believe that withdrawals like that are tenable when more prolonged droughts come along.

Groundwater isn’t going to make up for the shortfall for the energy industry or for ranchers and rural communities as it often did in the past. The Milk River aquifer, which supplies water for many users in Alberta and Montana, is 30 meters lower or more in some sub basins than it was in 1937.

“They came in biblical proportions.”

Greg Bowie is a rancher and chair of the Alberta Beef Producers who now spends a good part of his time consulting and helping ranchers adapt to climate change, high feed prices, and land values that don’t adequately reflect the cost of agricultural production. He can’t imagine a drought that was worse or more long lasting than the one in 2001-2002.

Thirty-two massive dust storms swept across the Prairies at the height of that drought. Forest fires ignited at five times the 10-year average. Thousands of prairie ponds, or sloughs as they are called in the West, dried up, and tens of thousands of waterfowl were unable to find suitable wetlands in which they could nest. 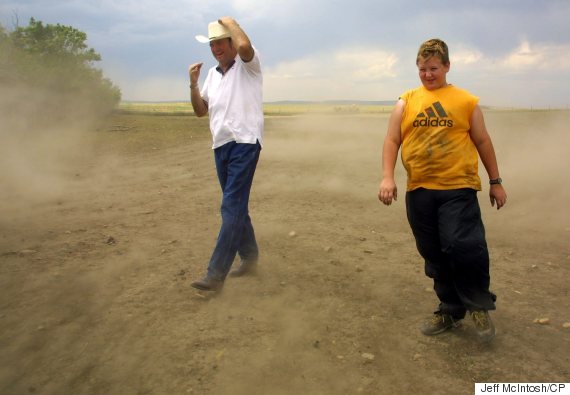 Howard Paulsen, left, and his son Ryan, 13, walk in what should be pasture as a dust storm blows through on thier farm near Stavely, Alta. on Aug. 13, 2001. (Photo: Jeff McIntosh/Canadian Press)

Adding to farmers and rural dwellers’ woes were swarms of grasshoppers that chewed up withering crops, and in some cases, the paint on houses. In one Saskatchewan district, there were as many as 100 grasshoppers per square metre of land.

“They came in biblical proportions,” recalls Alberta rancher Colleen Biggs who raises grass-fed, antibiotic-free cattle with her husband Dylan in the Hanna region of Alberta. “We lost 6,000 acres of grass to grasshoppers in six days. They ate everything green that was not 10 feet above ground. It was enough to curl the hair in your nose. We ended up shipping our cattle north because we ran out of grass to feed them.”

Water was so scarce in some places in 2001 that farmers in the St. Mary’s irrigation district in southern Alberta were literally put on rations. On average, they were allocated only 60 per cent of the water they traditionally get.

The winter of 2001-2002 didn’t help them and others on Prairies because it didn’t come that year in terms of snowfall. Heading into the spring of 2002 without any significant amount of snow on the ground, farmers needed 60 per cent more precipitation than they would expect to get in a normal year. What they got was 60 per cent less precipitation.

Unable to grow, or afford feed, farmers and ranchers sold off livestock in record numbers.

Drought dried up the land near Drumheller, Alta. in this photo from June 6, 2000. (Jeff McIntosh/Canadian Press)

It wasn’t just the Prairies that suffered. The 2001-2002 drought dried up virtually every part of the country. In 2001, Vancouver recorded the second lowest amount of precipitation since records started in 1939. At one point in the winter of 2001, the city of Victoria’s reservoir on the West Coast of Canada hit a 101-year low. Atlantic Canada had its third driest summer ever.

For the first time in a quarter century, farmers across Canada reported negative, or zero net-farm incomes. Over 41,000 jobs were lost. The GDP took a $5.8 billion hit. Had irrigation districts — by far the biggest users of water on the Prairies — not shared some of the water they were allocated, many municipal water supplies would have run dry.

“If had it had gone on for another year,” says John Pomeroy, the Canada Research Chair in Water Resources and Climate Change at the University of Saskatchewan, “managing what little water was left in many parts of the Prairies wouldn’t have been as friendly as it had been up until that time.”

“The future will not be kind to glaciers and mountain snow cover in western Canada.”

Like Sauchyn, Pomeroy says it’s time that governments start planning for droughts in the future because the insurance policy that we have in water that is currently flowing from glaciers once the snowpack begins to deplete, will not be there by the end of the century.

“The future will not be kind to glaciers and mountain snow cover in western Canada.” says Menounos. “The Canadian Rockies are not going to turn into the dry mountains of Nevada anytime soon. But thinner, quicker melting snowpacks, coupled with the loss of glaciers will fundamentally alter these sensitive mountain ecosystems.

“If we continue with the status quo,” Menounos continues, “we’re not going to have rivers that support salmon and bull trout, or agricultural and municipal landscapes that need to be supported by dams, reservoirs and irrigation. We really need to start planning now for the future.”

This is published in partnership with The Tyee. Ed Struzik is an award-winning writer and the author of “Future Arctic, Field Notes From a World on the Edge” (Island Press 2015), as well as “Arctic Icons, How the Town of Churchill Learned to Love Its Polar Bears” (Fitzhenry and Whiteside 2015).