Alberta's Historic Cap On Tar Sands Emissions Is Not The End

TORONTO — You might be hard-pressed to remember the last time you cracked open a can of soda and thought to yourself: “There’s gotta be an easier way to drink this.”

Yet the problem that probably doesn’t exist is now the project that Keurig is leaning its hopes on.

Nearly 18 years after the company revolutionized how coffee drinkers prepare their morning cup of joe, Keurig is searching for its next stage of growth amid dwindling sales of the Keurig brewer.

That’s where Keurig Kold comes in.

The cheekily misspelled cold drink machine, which launched in Canada on Tuesday, promises to serve up “fresh” glasses of popular soft drinks and flavoured waters using a variation of the same K-cup technology from its coffee machines.

But there are several other distinct differences with the new cold drink-maker – in particular its lack of convenience and the price.

At a hulking 23.7 pounds, the Keurig Kold machine weighs almost as much as a small microwave oven and sells at more than twice the cost. Its suggested retail price is $399.99 in Canada.

Each K-cup makes 8 ounces of the beverage, a convenient serving, but that amounts to about $1.30 to $1.50 per glass. Simple math says that’s more expensive than a 12-ounce can of soda.

“It’s for the one that really wants to have a premium experience,” said Keurig Canada president Stephane Glorieux when asked about the hefty costs that come with buying a Keurig Kold. “Although it seems very simple, there’s a ton of technology behind this.” 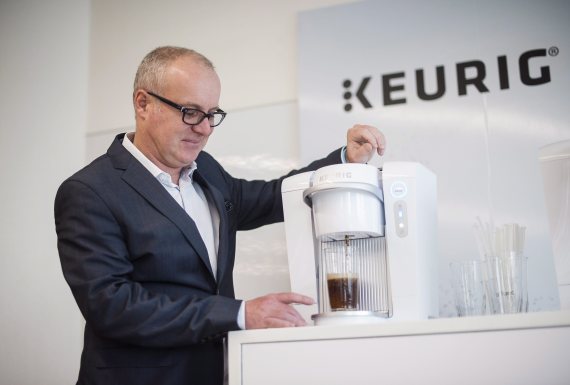 The Keurig Kold is more complex than its predecessor, which boils up some water and shoots it through a plastic pod and into a cup.

Inside the Kold machine, an “aerospace-inspired” contraption of thermoelectric conductors and a small propeller draw water from a reservoir up into the machine and help cool it to about four degrees Celsius, meaning ice is unnecessary.

Then the machine fires the liquid into a larger version of the K-cup, which stores both the flavour syrup and – in the case of some beverages – a new carbonated bead technology that adds the fizz.

The end result is a tasty and sweet treat that for a brief moment distracts from the reality that none of this process is really needed for a glass of soda or flavoured water.

Keurig built its reputation as a symbol of speed and convenience with machines that tucked into the corner of kitchen counters and eliminated the need to brew an entire pot of coffee just for one or two good cups.

The new machine is almost an antithesis to the company’s early appeal. Aside from its large size, the Keurig Kold takes 90 seconds to make a beverage, which is a lot longer than it takes to pry open a can of Coke.

Keurig Kold is a direct play at a corner of the drinks market dominated by Sodastream, which uses CO2 cannisters to carbonate water and create flavoured sodas.

Sodastream does not have partnerships with the world’s major soft drink makers, but Keurig counts Coca-Cola as its biggest outside partner, which means Coke, Coke Zero, Diet Coke and Sprite are among its 13 flavours in Canada.

Keurig Kold launched in the U.S. earlier this fall, but in Canada it will only be available online through the Keurig website and a couple other retailers during the crucial holiday season. The company said it plans to be in Canadian retail stores next year.

The approach suggests that even Keurig executives aren’t entirely convinced the machine is going to be a hot seller.

“It’s going to be a very structured approach to make sure that we build the install base,” Glorieux said as he described the rollout. “This is not going to be a wild fire.”

“We know that the first product we put out in a new technology is never going to be perfect,” he said.