OTTAWA — The head of one of Canada’s largest banks says the country’s post-secondary institutions are not producing enough graduates with the right skills to drive future economic growth.

CIBC chief executive Victor Dodig told The Canadian Press in an interview Tuesday that much of Canada’s eventual growth will come from entrepreneurs who commercialize new ideas and technologies for all sectors of the economy.

Dodig credited Canada with boasting a high overall participation rate in post-secondary education when compared to other industrialized countries.

“And yet, we have gaps — we’re not producing the types of skills that industries need,” said Dodig, who also discussed the subject Tuesday in a speech to business leaders at the Canadian Club of Ottawa.

“A lot of people are overeducated and underqualified for the jobs that are needed.”

He said the country lags among its international peers when it comes to teaching disciplines that are increasingly important for innovation, such as science, engineering and mathematics.

Dodig’s comments come at a time when Canada has struggled amid an uncertain global economy and the sting of low commodity prices, particularly in the energy sector. Other industries, meanwhile, have been slow to pick up the slack.

These factors have had consequences for Canada: the economy contracted in the first two quarters of 2015. 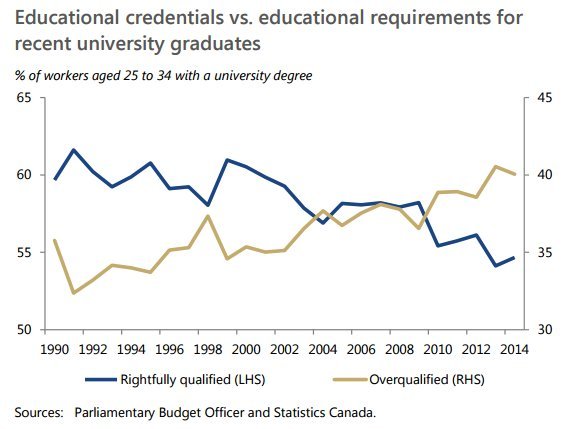 A recent study from the Parliamentary Budget Office found four in 10 recent Canadian university graduates are now overqualified for their jobs.

Dodig said the country’s schools must work harder to tailor the kinds of programs they offer to students to the specific needs of industry.

A primary goal, he said, is to help “start-up” companies grow into permanent, job-creating global players before they are bought out by even bigger firms from abroad.

To help them get there, it’s also important to have robust intellectual-property protection and to connect these companies to networks of advisers, he said.

“We need to be doing this across our economy,” said Dodig, who noted Canada should be looking to learn from models in countries that have been successful in helping innovators, such as the United Kingdom and Germany.

“Rather than hoping that the Canadian dollar will be our single variable to drive growth, we need to be thinking about how innovation matters and how we organize around that.”
Source: HP