Liu Yiqian, Chinese Billionaire, Puts US$170.4-Million Painting On His Card, Gets 10s Of Millions Of Points

Climate Change Bringing Ontario Homeowners Flood Of Insurance Hikes. What You Can Do.

NEW YORK — Chinese billionaire Liu Yiqian, who doesn’t exactly struggle to afford a plane ticket, can now likely fly free, in first class, with his whole family, anywhere in the world, for the rest of his life.

All because he bought a painting.

Liu was the winning bidder for Amedeo Modigliani’s “Reclining Nude” at a Christie’s auction this month — offering $170.4 million — and when the sale closes he’ll be putting it on his American Express card.

Liu, a high-profile collector of Chinese antiquities and art, has used his AmEx in the past when he’s won art auctions. He put a $36 million tea cup from the Ming Dynasty on his AmEx last year, according to reports, and put other artifacts on his card this year. He and his wife said they plan on using their American Express card to pay for the Modigliani, according to news reports after the sale. 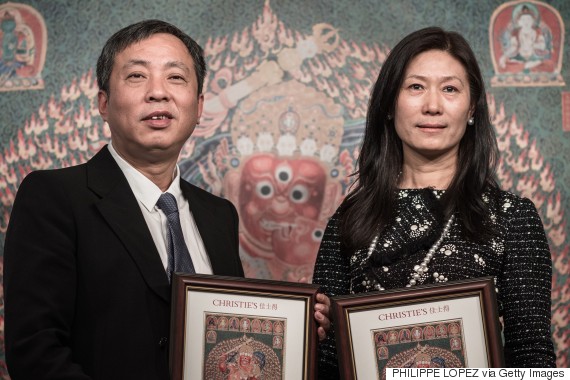 American Express will not confirm Liu Yiqian’s Modigliani purchase, or say if it would be the biggest ever on their cards, citing privacy reasons. But it can be done.

“In theory, it’s possible to put a ($170 million purchase) on an American Express card,” said American Express spokeswoman Elizabeth Crosta. “It is based on our relationship with that individual card member and these decisions are made on a case-by-case basis, based on our knowledge of their spending patterns.”

Liu has an American Express Centurion Card, also known as the AmEx “black card,” an invitation-only card that is given only to AmEx’s biggest spending clients. The card has no official credit limit — and it earns points, just like most of the cards non-billionaires carry around. 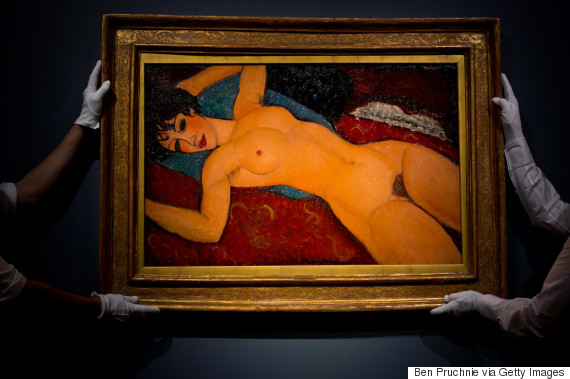 Art handlers hang the painting ‘Reclining Nude’ by artist Amedeo Modigliani during the preview ahead of the artist’s muse: a curated evening sale in Christie’s New York on October 9, 2015 in London, England. (Getty Images)

Each AmEx card issued in each country accrues points differently. But using a baseline of one point per dollar, what American Express uses for its U.S. Platinum and Centurion Cards, Liu will earn 170,400,000 Membership Reward points for his painting purchase, which doesn’t include tax or the fees Christie’s charges. He has likely earned tens of millions of points for his earlier fine art buys, like the expensive tea cup.

Liu and his wife, in an interview with The New York Times, said they plan to use the points to allow their family to travel for the rest of their lives.

That shouldn’t be a problem, according to Zach Honig, editor-in-chief of the travel rewards site ThePointsGuy.com.

Honig estimates that if Liu converted his Membership Rewards points into one of a number of airline frequent flier programs, he and his family could travel anywhere, in style. He could fly 3,000 times between the U.S. and Europe in the ultra-deluxe first class suites offered by Singapore Airlines (estimated cost: $17,800 round trip), if he converted points to Singapore’s program. Even if Liu wanted to use his AmEx points to pay for flights, a less efficient use of them, he could still redeem those points for hundreds of first class flights anywhere in the world.

Lui, who is worth $1.4 billion according to Forbes, probably didn’t use his Amex for the points. China allows its citizens to transfer no more than $50,000 out of the country in any year, and using his card could help him get around this limit because he’s just paying back American Express or the bank in China who issues his card.

It’s a common tactic, says Bill Majcher, a former financial crimes investigator for the Royal Canadian Mounted Police who is now based in Hong Kong working as an investment banker.

“One simple little black AmEx card or one credit card, you never know what somebody’s limits are,” he said. “And some people have unlimited amounts based on their wealth and ability to pay.”

One potential loser here could be Christie’s. Every time an American Express card holder uses the card, AmEx charges the merchant a fee. That fee is usually 2 to 3 per cent, depending on the merchant. For a $170 million painting, millions of dollars could flow to AmEx instead of Christie’s — enough, presumably, for AmEx to pay for the Liu family’s future flights, and then some.