Barack Obama: Canada, U.S. 'Soon To Be' Signatories To TPP

Rob Saunders points a flashlight into the depths of an immense plastic tank at his hatchery, illuminating millions of scallop larvae as tiny as dust particles.

“Think of these as canaries in a coal mine,” says the marine biologist turned embattled shellfish farming CEO.

Beginning in 2011, the company’s scallop brood stock (adult shellfish bred over 25 years to be disease-resistant and exceptionally meaty), began to die. 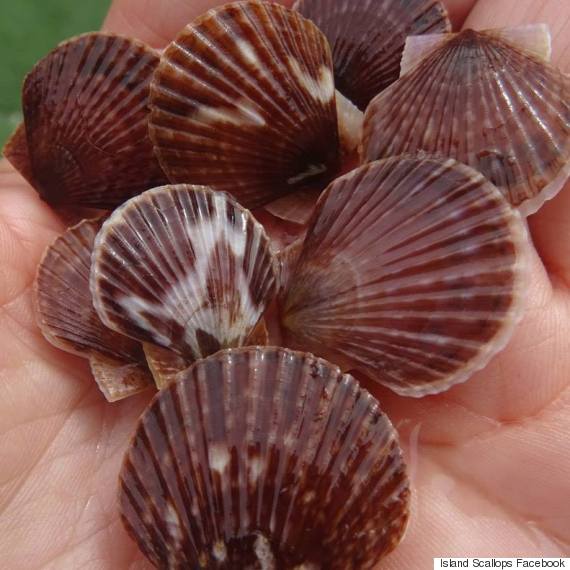 Then between January and August 2013, nearly 10 million scallops approaching harvest age in the Strait of Georgia perished.

Meanwhile, the company’s larvae, which are reared in giant 40,000 litre hatchery tanks, were dying in droves.

Island Scallops, which holds nearly 20 percent of all shellfish culture areas in B.C., saw its staff drop from 45 to the current skeleton crew of 12. 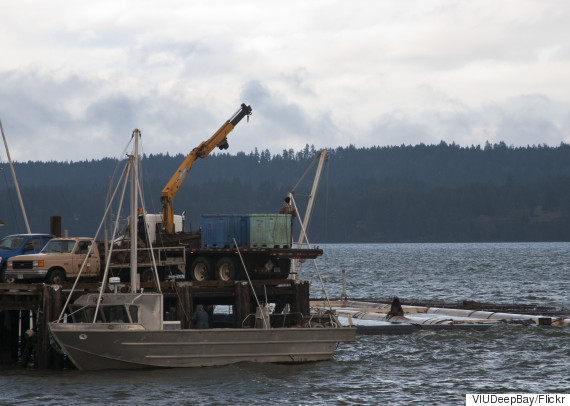 Initially Saunders believed a mystery disease was the underlying cause of the disaster. That theory was dashed after they tested the ocean water being piped into the hatchery from the Strait of Georgia.

“As a biologist I was always taught that this ocean doesn’t change much, not drastically at least, so it came as a shock when we saw the pH drop,” he says (lower pH equals higher acidity). “It became clear to us that the issue was carbon dioxide in the ocean.”

In 2014 a scientific review was published summarizing the known climate change effects on Canada’s Pacific marine ecosystems. It stated that the world’s oceans have absorbed more than a third of all human-produced CO2 emissions emitted over the last 250 years — about 130 billion metric tonnes in all, reducing ocean pH to the lowest levels in 20 million years.

The authors also noted that with increased C02 dissolved into the ocean comes increased acidity, which impacts the ability of animals like scallops and oysters to produce and maintain their hard shells. 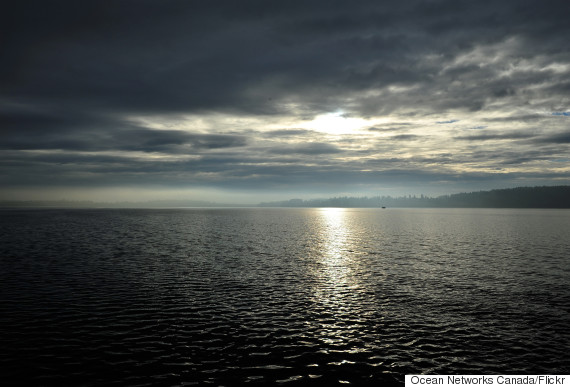 The Salish Sea, which encompasses the Georgia and Puget Sound basins straddling the U.S. and Canada, is particularly vulnerable to ocean acidification, because it already has some of the planet’s lowest pH waters. That’s because the northeast Pacific Ocean resides at the terminus of a vast oceanic conveyor belt that delivers oxygen-poor, C02-rich water to our corner of the Pacific through a natural process known as upwelling.

Tom Pedersen, a marine geochemistry expert, oceanography professor at the University of Victoria and executive director of the Pacific Institute for Climate Solutions, explains the process of upwelling with an analogy.

Imagine a train regularly departs from near Iceland with a load of surface water, travels up towards Norway, where it drops to the bottom. The tracks on the seafloor lead all the way to Antarctica, and eventually, all the way to the terminus on the surface in the northeastern Pacific.

Throughout this journey the roof of this slow-moving train is pelted with organic material (the bodies and waste of animals), which adds C02 to the water as it decomposes and consumes oxygen. It typically takes about 1,500 years for this ancient water to make the journey to the surface of the Salish Sea.

“As a biologist I was always taught that this ocean doesn’t change much, not drastically at least.” — Rob Saunders

Pedersen says it is this natural upwelling of oxygen-poor, C02-high water that makes our corner of the Pacific so vulnerable to ocean acidification.

“It is already more acidic when it arrives in this part of the world,” he says. “Then it comes to the surface, and we’re adding more C02 into the upper ocean, and it’s mixing with that, and that lowers the pH even further.” 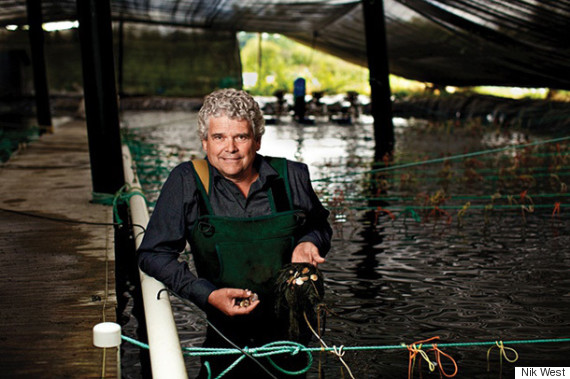 Rob Saunders is a marine biologist and the CEO of Island Scallops. (Photo: Nik West)

Such high acidity does not kill an oyster or scallop in and of itself, Saunders explains. Low pH limits the amount of calcium carbonate available to shelled animals particularly in their early stages of development — forcing the animal to expend so much energy trying to build a shell from the acidic waters that it is weakened and vulnerable to disease and problems it could normally withstand.

The mass shellfish die-offs in Pacific waters did not begin with Island Scallops. By 2008 and 2009, Washington state’s Taylor Shellfish Farms, the biggest farmed shellfish producer in the entire country, was reporting 75 per cent drops in oyster larvae production. What ensued was what Taylor executive Bill Dewey calls a “West Coast oyster seed crisis.”

The issue of ocean acidification quickly became a political priority in Washington state, which is the United States’ single biggest producer of farmed shellfish — worth about $270 million in annual economic activity and employing more than 3,000. 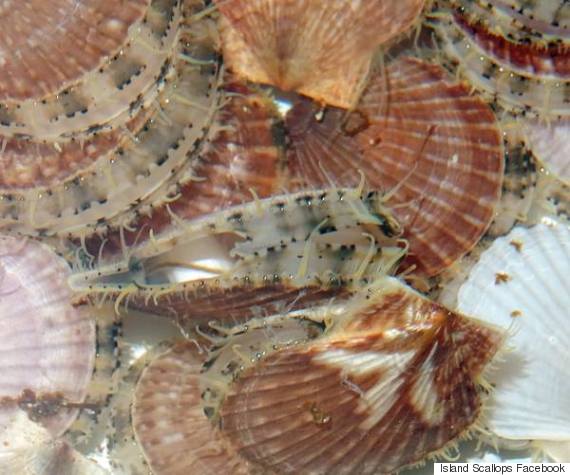 An underwater look at Pacific scallop seed from Island Scallops.

Senator Maria Cantwell got involved, providing emergency cash to fund monitoring equipment so that hatcheries could scrutinize their water.

Adaptation to ocean acidity meant adopting what Dewey calls a “monitor and dodge” strategy to avoid corrosive water. By monitoring hatchery intake water beginning in 2010, shellfish farmers quickly learned that if they waited until later in the day to fill their tanks, photosynthesis from sea grass and phytoplankton in the local environment could improve the seawater. They learned to monitor the wind directions, as certain northern winds reliably portend upwelling of bad water.

They have also started “sweetening” the water before its used — adding sodium carbonate to lower the acidity of the water, a strategy that Island Scallops now employs as well. Dewey says monitoring and treatment have been very effective so far.

Shallin Busch, a scientist with the National Oceanic and Atmospheric Administration’s ocean acidification program and Northwest Fisheries Science Center in Seattle, says the shellfish mortalities at Taylor operations and elsewhere in the state served as a wake-up call about ocean acidification.

“It was the first place in the world where scientists could say, and show data that has been peer reviewed and published, that the extra contribution of carbon dioxide into the water caused acidification that was harming production in the shellfish hatcheries.”

Impacts to shellfish farms and some corals have done much to bring ocean acidification to the public consciousness, but the issue is just beginning to get attention, even among scientists.

What complicates the study of the phenomenon — and the prediction of its impacts on species and ecosystems — is that it is not happening in isolation.

At least two other variables are simultaneously changing in the oceans, according to Kenneth Denman, an adjunct professor at the University of Victoria’s School of Earth and Ocean Sciences and pioneer in studying how climate change affects the marine environment. Sea surface temperatures are on the rise and dissolved oxygen levels are decreasing in many areas.

“… we’re talking now about having to study multiple stressors, and how they might change each other, because it’s unlikely that pH change is the only thing that is going to happen out there.”

Surface temperatures in the Strait of Georgia increased by about one degree Centigrade during the last century based on lighthouse records, and oxygen in the North Pacific has already dropped 22 per cent during the last 50 years at depths of between 100 and 400 metres.

“So we’re talking now about having to study multiple stressors, and how they might change each other, because it’s unlikely that pH change is the only thing that is going to happen out there.” 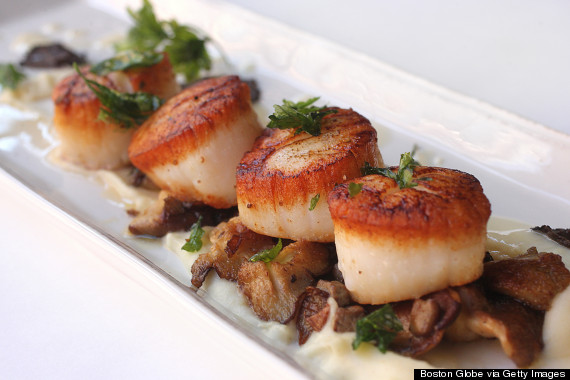 How species and ecosystems will be affected by ocean acidification is a question that NOAA’s Shallin Busch spends a lot of time thinking about. She says there are two ways of looking at it. First there is the direct sensitivity to an animal like a scallop larvae in response to increased acidity. Second is the wider dynamic of how all life in the ecosystem will interact under changed ocean conditions.

Busch says organisms that take in CO2 as energy and turn it into oxygen — including some planktons, algae and sea grasses — will possibly benefit or be fertilized by extra C02 in our oceans. Conversely, animals that produce calcium carbonate hard parts, like many shellfish with shells, sea urchins and corals (the latter build their skeletons out of calcium carbonate), are currently believed to be most in peril.

But sensitivity to lower pH waters alone does not necessarily spell a decline. “It could be that a species is really sensitive, but your predator is really sensitive too, so maybe you will end up with less predation, and maybe your populations will stay stable.” 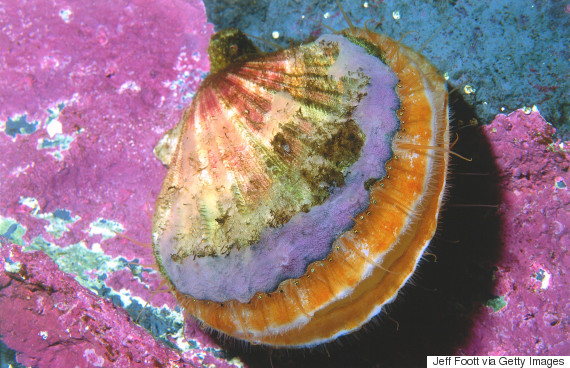 Back at Island Scallops, marine biologist and Island Scallops general manager Bruce Evans gives a tour of two scallop farms in the ocean. Evans is waiting for definitive proof that human-generated greenhouse gasses are the reason his company’s scallops inhabit increasingly acidic waters.

He says that ocean upwelling of CO2-rich water is likely the source of their troubles, but what’s driving that hasn’t been fully nailed down. Whatever the reason, it’s Evans’ job to help find a way for Island Scallops to adapt.

On Baynes Sound, Evans points to a few flocean acidificationts offshore, where his firm is trying to create a new, hardier strain of scallop. They are doing this by taking the animals that appear to thrive in the acidic ocean and using them to breed stock for the hatchery.

“We’re letting natural selection decide,” says Evans. Such experiments, he says, represent a “make it or break it” moment for the company. And possibly, for an industry.

This is published in partnership with The Tyee. Christopher Pollon is a Vancouver-based freelance journalist who contributes to The Globe and Mail, BC Business and The Tyee, where he is a contributing editor.